History and development of the fourth generation of GAZ trucks (4x2)

In the early 80's when designing the truck GAZ-3307 and other models of the fourth generation provides ample unification on sites and aggregates existing production car (chassis and gasoline power plant, in fact, moved from model GAZ-53 -12 ), which allowed reduce the cost of automobiles and at the same time facilitate the maintenance, repair and operation. The car received a more spacious, modern double cab, equipped with efficient ventilation and heating system, first applied in the pilot truck GAZ- 4301 in 1984. The design of the steering unlike their predecessors, for the first time, includes power steering . Serial production of 4.5 - ton truck GAZ-3307 (4x2 ) with a carbureted engine ZMZ -511 125 hp began in late 1989.

In late 1994, with the development of the four issue at GAZ diesel turbo air cooling GAZ- 5441 115 hp, a model GAZ- 3309 carrying capacity 4,5 t, completely unified on the chassis and cab with GAZ-3307 ( only looks different engine air intake pipe on the left side of the cab ) . By mid- 1996, it completely replaced with a conveyor truck carburetor 3307 . In mid-1997 its own production of diesel " air-vent " at GAZ was considered uneconomical, resulting in release of the model 3309 has been suspended until the end of 2001, and was restored in the production of 4,5- thin carburetor GAZ-3307 . Subsequently, gas switched to purchase Belarusian diesels MMZ D - 245.7 ( similar turbo water cooling installed on ZiL-5301 " Bull ") Minsk Motor Plant (MMZ ), which is installed in the production resumed in 3309 model .

In 2000 GAZ- 3307 and 3309 have been used by various companies ( since Zams GAZ ) to create versions with extended frame for mounting vans, car hauler and other machinery. Payload such elongated chassis with no increases and an increase in the size of the mounting frame is fully utilized by increasing the effective length and scope of the body, which is beneficial for transportation, for example, long- and bulk cargoes. Also, got some distribution elongated cabin with berth for intercity traffic. 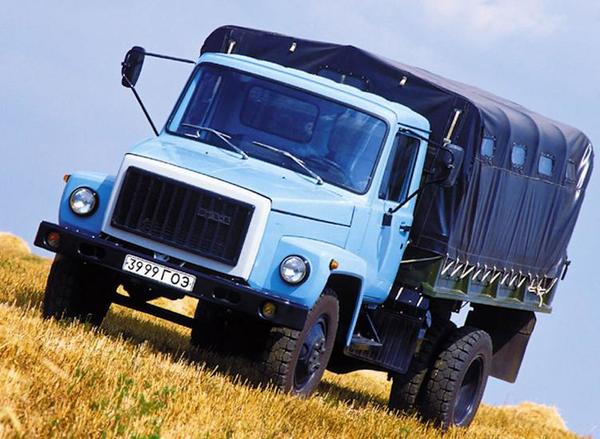