The GAZ-3310 Valdai (Ru:Валдай) is a medium-class flat bed truck (category N2 MCV), produced in late 2003 at the Gorky Automobile Plant in Russia. It differs from the Light commercial vehicle "GAZelle", which requires a category C driver's license.

After the economic collapse in the late 1990s, the Gorky Automobile Plant cartel (along with AMO), created a flat bed trailer to transport medium duty trucks in response to market demand. The first models were created in conjunction with MAZ. Minsk residents later refused to supply their GAZ type MAZ-5336, and instead launched a family of five-ton, low loader trucks: the MAZ-4370 "Zubrenic". GAZ had to develop their own cabin, because available cabins did not suit their needs. Eventually these cabins were used as the basis for the popular "GAZelle" (GAZ-3302). GAZ has produced two engine types: a compact, 4-cylinder engine and an inline six-cylinder diesel GAZ-562 (License Steyr).

Despite its protruding engine cover, the modified engine compartment provided room for a second passenger within the cabin and is listed as "conditional triple" for short and long distances. The GAZ-3310 used modern teardrop-shaped headlights as well as a hood, grill and an integrated bumper, each of which have been modified. The prototype four-ton GAZ-3310, titled "Valdai", debuted at the Moscow International Automobile Salon in 1999. In 2003, "Valdai" began the mass production of block headlights which assisted in the restyling of their commercial "Gazelle" and "Sable" vehicles. The "Valdai" type chassis - a 5-ton diesel truck (GAZ-4301) - was modified with reversed front suspension; it introduced new front and rear axles, and low-profile tires. The braking system was originally only air, but was refined to allow the installation of an automatic breaking system (ABS). The entire set of design modifications allowed for the creation of a modern truck with a low-loading height (1000 mm), comfortable suspension, an advanced braking system, and an economical diesel engine.

The power unit for the "Valdai" offered diesel MMZ D-245.7, gas (Steyr)-562, Cummins 3.9 140 CIV, and IVECO-8143, SOFIM. For economic reasons, preference was given to the Minsk D-245.7 modification (GAZ-33104). In 2006, production on a wheel base that extended to 4m version for GAZ-331041 began. At the Moscow International Motor Show, an experimental version (GAZ-43483) was shown containing a reinforced chassis (GVW 8.5 tons and double) and a cabin designed for long-distance transport together with a chassis for prospective models of small buses. In 2004-2006, the "Valdai" was created by experienced Russian makers of buses for small class (KAvZ - 32081 and PAZ-3202). Ukraine serially produced the small bus Galaz-3207, cars and the fire vehicle "Killer Whale".

External differences from the GAZ Valdai to GAZ Gazelle

Externally, the GAZ Valdai has a larger grille, a massive front bumper, two step cabins (one at GAZelle), with an open bottom step, and the upper like the car GAZelle hidden door, as well as side mirrors in addition to marker lights on the cab roof. 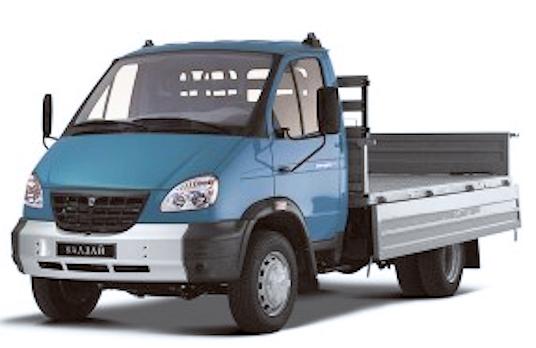