The GAZ Sobol (Russian Соболь for Sable) is a series of Russian light-duty trucks, vans and minivans, produced by the Gorky Automobile Plant from November 1998. GAZ refers to the Sobol as a minivan

At the end of 1998 GAZ based the Sobol on the Gazelle (class LCV -MC), GAZ shortened the GaZelle to a 2760 mm wheelbase, gave it a spring independent front suspension and a pent-tire rear axle, and designed it for a smaller capacity (up to 900 kg).

Minibus GAZ-22171 with high roof (similar height "Gazelle" GAZ-3221) in the 6 and 10-seat versions. Since 1999 began production of the model 2217 "Sable Barguzine" with "low" roof (height reduced by 100 mm), lift gate back door, positioned by the manufacturer as a minivan. For business purposes and taxis designed 10-seat modification of GAZ-22173 with a more dense layout and simplified trim (available on request).

In the family of "Sable" and provided GAZ-23107/27527/22177/221717 wheel-drive version with rigid front axle and universal joints (joints Gukka) to drive forward driving and steering wheels. Transmission is made with permanent four-wheel drive transfer case with a chain driven mnogozvenchatoy Morse.

In early 2003 the family "Sobol" has undergone restyling, a similar family of "Gazelle" with the redesign of feathers and replacing the rectangular headlights on modern headlight unit teardrop shape, as well as the replacement of the instrument panel and so on.

In the 2006 assembly of the truck, "Sobol" GAZ-2310, before that produces only small quantities, was translated into a string of conveyor with side "Gazelle" GAZ-3302, significantly increasing the production of this model in demand, particularly in Moscow, because of restrictions on entry into the city center car carrying capacity of 1.0 tons

In February 2010, GAZ began production restyling of the "Sobol-Business" family with a package of upgraded components and assemblies, the same family of " Business Gazelle ".

Since the end of 2010 "Sable-Business" also received a turbo Cummins ISF 2.8, since July 2010, is set to "Business Gazelle". Production of models lined the sample in 2003 and partially modernized units called "Sable-Standard" are stored only on a limited basis for modification of special purpose, certified for law enforcement agencies of the Russian Federation.

On vehicles of the family "Sobol", as in "Gazelle", initially (until 2006) used the following engines:

Since 2006 the Sobol uses injection engines with Euro-2 emissions:

In 2008 - fuel injected engines with Euro-3 emissions controls were:

Since 2009 the family "Sobol" is equipped with the following powerplants: 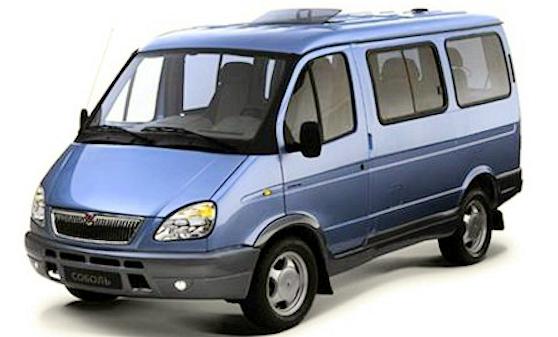