The GAZ M1  was a passenger car produced by the Russian automaker GAZ between 1936 and 1943 at their plant in Gorky (the name of the city reverted to Nizhny Novgorod in 1990).

The car has subsequently become an icon of its time in Russia, having been relatively popular, and featuring in film and photographic images of a defining period in the history of the state. Systematic production ended in 1941, but the factory was able to continue assembling cars from existing inventory of parts and components till 1943. 62,888 were produced.

Much of the car’s production period coincided with the Second World War, and many Emkas were used by the army as staff cars. Various special versions were produced such as the Gaz M - FAI and BA -20 armoured car models

The Soviet Union’s first passenger car had been the GAZ-A, produced between 1932 and 1936, and based on the Ford Model A (1927–31), built under license from the American manufacturer. It would be many years before passenger cars became available for private buyers in the Soviet Union, and passenger cars at this stage were produced for official and military use. By the time the GAZ-A was being produced in the Soviet Union, the western original was already becoming superseded in its western markets, and the politicians and army looked for a way to reduce dependence on imported components and replacement parts. The version of the Ford adapted for Soviet production was an open topped car which was unsuitable for the winter climate encountered in most of the country, and the cars were felt to be unreliable and insufficiently robust for the relatively harsh Russian conditions. There had therefore been various attempts to modify the GAZ-A using locally designed elements, but the body structures in question had used traditional timber frames with panels attached, which were labour intensive to produce and excessively prone to deform. In the US car body construction was changing radically during the later 1920s, using technology pioneered by Ambi Budd, for the production of all steel car bodies. The new approach used far more complicated steel pressings than had hitherto been possible, and the same new techniques were adopted by the more prosperous of the volume auto-makers in the west of Europe through the 1930s. GAZ’s western technology partner, Ford, took a conservative approach to these developments, but during the early 1930s they, too, would join in the switch to all-steel car bodies.

The Soviet Union was keen for the same technology to be applied at the GAZ plant in Gorky (as the city was known at that time), exploiting a ten-year technology sharing agreement which had been signed with Ford at the start of the decade and which at this stage remained more or less intact.

Work began in 1933/34 on a replacement for the GAZ-A, again using a (newer) Ford model as the basis. The model in question was the Ford Model B, which in North America was becoming available with a wide range of different bodies.

Specifically, the first prototype for the GAZ M-1 was based on the 1934 Ford Model B 40A four door sedan. The prototype was powered by a four cylinder engine, although it appears already to have been intended that production cars, like the Ford on which they were based, would use V8 units. Documentation was transferred by Ford in accordance with the terms of the technology sharing agreement and the first prototype was unveiled in February 1935. A major innovation for the manufacturer was the all-steel body, although at this stage the roof was still reinforced using timber side rails and was coated with synthetic “leatherette” fabric.

In 1936 the M-1 replaced the GAZ-A on the manufacturer’s production lines, with the first two cars produced in March of that year and volume production starting in May. By the end of 1936 the plant had produced 2,524 GAZ M-1s, and in 1937 an M-1 was displayed in Paris at the International Artistic and technical exhibition of modern life. The letter ”M” was included in the car’s name as the plant's name included that of Vyacheslav Molotov.

The development of the M-1 involved many changes to the Ford on which it was based, so that many came to view the Russian car as a separate model. The rather primitive Ford suspension was completely redesigned to cope with local conditions, and matched to strong steel wheels. The V8 engine was based on the same technical drawings as those used for the Ford engine, but Ford has sent only drawings. The GAZ development team had not had access to the actual Ford engine as fitted in Detroit, and so any necessary interpretations of the technical drawings were their own. The GAZ engineers also redesigned the front wings which left the Russian car with a more elegant shape which provided better protection from the elements for the front suspension.

The M-1 represented a huge advance over its predecessor in many respects. Most obviously, it came with a body that used the “all-steel” approach of the more modern western designs (despite retaining timber structural elements in the roof frame) and, unlike its predecessor, a permanent fixed roof. The chassis featured an “X” shaped cross member making it far stronger. The suspension was more modern and the road holding more sure-footed. Under the bonnet/hood the car came with automatic ignition, while the cabin featured front seats that could be adjusted, sun-visors, along with an electric fuel gauge, and windows which could be swiveled into an open position.

The engine and transmission

The engine was more powerful and more durable. Maximum output rose from 40 PS (29 kW; 39 hp) to 50 PS (37 kW; 49 hp), supported by a compression ratio increased to 4.6:1 and a new carburetor design. The new engine came with a fuel pump whereas its predecessor had depended on a gravity driven fuel-feed system.

The same engine was subsequently installed in the GAZ–MM light truck, an upgrade of the GAZ-AA.

The three speed manual transmission now featured synchromesh in the upper two ratios, and was the gear box that would be carried forward to the replacement GAZ Pobeda in the later 1940s.

Most of the cars were painted black with a thin red stripe down each side. The seat covers were of thick cloth material coloured grey or brown, while the interior décor was characterised by painted metal, albeit combined with some wood trim.

Towards the end of the 1930s the decision was taken to replace the by now rather dated Ford designed side-valve engine. Again, the manufacturer turned to the US auto-industry, this time to Chrysler. The engine selected was the six cylinder unit fitted to the Dodge D5, which was considered relatively advanced at the time despite being a development of a unit that had originated back in 1928. The 3485cc unit produced 76 PS (56 kW; 75 hp) which was far more power than that produced by the Ford designed units that had powered the earlier M-1s.  The necessary drawings were purchased in 1937-38, and after all the measurements had been converted to their metric values the necessary tooling was created and volume production of this engine, now designated as the GAZ-11 unit, began in 1940. The same unit was the basis for power units fitted in the manufacturer’s Pobeda and in the larger Zim limousine. It also found its way into the remarkable all-wheel drive GAZ-61 as well as various military applications such as tanks and gun carriages.

Plans to develop a dedicated taxi version of the M-1 were never fully realised, but there was nevertheless a demand for taxis in some cities which the M-1 fulfilled. The first 20 cars produced were introduced as taxis in Leningrad in 1936, and by the late summer of 1939 there were 20 of the cars being used for taxi work in Minsk. By that date there were 465 registered for taxi work in Leningrad and a further 2,740 in Moscow. 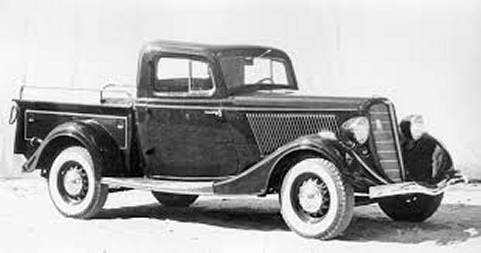