Volga cars were almost the only taxi cabs in the USSR. In 1971, the GAZ-24-01 taxi was introduced It had cheap and easy-to-wash all-vinyl interior, low compression ZMZ 24-01 engine (85 hp, SAE Gross 95 hp) able to run on 76 octane fuel (most commonly available in the Soviet Union), taximeter under the dash, and distinctive checkerboard stripe on front doors. At first, Volga taxicabs were painted in different light colors; later, most taxicabs were painted in lime-yellow. The GAZ-24 is still famous for fantastic roadworthiness and durability. Volga taxicabs often have more than 1,000,000 km (620,000 mi) on their odometers, and several engine rebuilds. Taxicab drivers nicknamed GAZ-24 sedan "The Shrimp" due to its slim (compared to the GAZ-21, nicknamed "The Holy Cow") appearance and two "fangs" under front bumper that resembled shrimp's claws. Wagon taxicabs GAZ-24-04 (station wagons were used as cargo taxies) were nicknamed "The Shed" due to vast interior space; they had a payload of 400 kg (880 lb), thanks to stiffer rear springs.

In 1972, the GAZ-24-02 4-door station wagon was introduced, fitted with three rows of seats However, Volga wagons were not sold to private owners without special permit. For example, families with many children or sportsmen who had to carry heavy sport equipment (like parachutes) were allowed to purchase a Volga wagon. Famous clown and actor Yuri Nikulin was permitted to own a GAZ-24-02 wagon because he often transported heavy circus equipment. This restriction came from small volume of GAZ-24-02 production. Wagons were primarily used by hospitals (as ambulances), state-owned shops and taxi companies, Militsiya, GAI, post offices and other state enterprises. The wagon was sold freely in export markets.

The GAZ-24-02 had generous interior area with 3 rows of seats and 7-8-passenger seating. Area behind the front seat could be converted into spacious one-level cargo compartment. 24-02 had heavy-duty rear leaf springs (six leaves as opposed to the sedan's five) and could carry up to 400 kg (880 lb), thanks to stiffer rear springs.

The GAZ-24-04 was a taxicab breed of Volga station wagon with distinctive features similar to sedan taxicab.

The GAZ never built GAZ-24 convertibles. All convertibles were produced by a military plant in the city of Bronnitsy. They were used for military parades.

Volga-based pickup trucks were built by different car repairing plants all over the country. Exteriors differed.

During the winter of 1973-74, five AWD GAZ-24-95s were built. It used a UAZ transfer case, with a heavily-modified floorpan. The front axle ended up being a Volga rear axle turned backwards, attached to UAZ joints for the steering, with front leaf springs (on stronger frame rails, to carry the greater load). The sump also had to be modified. In all, the changes added 90 kilograms (200 lb). Some disadvantages were discovered during the tests and this modification remained experimental. One survives in the GAZ plant's museum, another perhaps in private hands in Nizhny Novgorod.

The GAZ-24 was displayed at the London Motor Show in 1970. Full-scale manufacturing started 15 July 1970. Export sales began in 1971. During 1970-74 the Volga remained almost unchanged. Only minor modifications took place in 1972-73, when the car got new trunk decklid lock, flat ashtrays in rear doors instead of early ashtrays that were built in rear doors armrests, new rear bumper and new radio with more pleasant appearance and modified construction. In 1973 dashboard with simulated wood insert appeared (also there was a "silver" grained finish, used until 1974). After 1973, the ignition switch was moved from the dashboard to under the steering wheel to prevent knee injuries in road accidents, although that was inconvenient for the driver. Also in 1974, the Volga got additional C-pillar parking lights on(something like opera lights). The 24-01 was joined in 1977 by the 24-07, which was fitted to use liquified propane.

The original strip speedometer was changed to dial 1975, the same year the ignition switch was moved from the dash to the steering column. Beginning in 1977, seatbelts began to be offered.

In 1978, about 1000 right-hand drive 24-56s were built for export to India, Pakistan, and Singapore; powered by the Peugeot XDP 4.90 engine, they were not assembled in Belgium, and were the last right-hand drive vehicles GAZ built.

The Volga was a status symbol in the Soviet Union, being large and luxurious, with a three-band radio. Unlike the GAZ-21, however, for most of its production lifetime, it was not commonly available to the public; those that were sold required a special permit to purchase them. This would not begin to change until the 1980s

In 1975 the car was slightly modified. It got another, more conventional speedometer, more convenient outside rearview mirror. Engine cooling system was modified to use antifreeze instead of water.

From late 1974, a V8 powered version was produced in small numbers, the GAZ 24-24. It had aluminium 190 hp (140 kW) 5,530 cc (337 cu in) OHV ZMZ 503.10 V8, dual exhaust, 3-speed automatic transmission (same as the Chaika, power steering, modified suspension, and a 105 L (28 US gal; 23 imp gal) fuel tank, but the same drum brakes of the standard Volga. This modification is sometimes designated "device 2424", and was nicknamed "The Double" (for having a V8, rather than a straight four) and "Chaser" (Russian: догонялка, dogonyalka). "Device 2424" was used by the KGB as interceptor and security car. The main function of the "2424" was an outrider vehicle accompanying governmental Chaika and ZIL limousines. 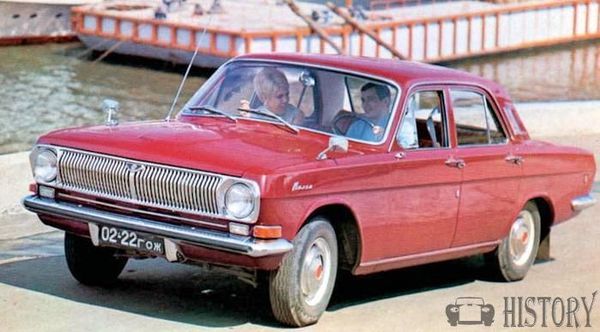