The GAZ M21 Volga, the first car to carry the Volga name, was developed in the early 1950s. Volgas were built with high ground clearance (what gives it a specific "high" look, contrary to "low-long-sleek" look of Western cars of resembling design), rugged suspension, strong and forgiving engine, and rustproofing on a scale unheard of in the 1950s.

The Volga was stylistically in line with the major United States manufacturers of the period, and incorporated such then-luxury features as the reclining front seat, cigarette lighter, heater, windshield washer and 3-wave radio.

When in 1959 the 6-cylinder line of GAZ cars was discontinued, Volga M-21 became the biggest and most luxurious car officially sold to individual owners in the USSR in large quantities, though its price was very high and made it unavailable for most car buyers.

The three series of GAZ-21

The design process leading to the GAZ 21 began in November 1953. Alexander Nevzorov, head of the design team, was given a free hand to develop whatever he wanted, with the objective of competing with American products. Stylist Leo Eremius studied the Chevrolet Bel Air, Plymouth Savoy, and Ford Customline for ideas; the finished product bears a resemblance to a 1955 Customline.The prototype appeared in 1954, powered by an inline four with overhead camshaft (driven by chain) and cross-flow hemi head. Since the OHV engine was not ready in time, production M21s had a 65 hp (48 kW; 66 PS) 2,432 cc (148.4 cu in) sidevalve four, based on the GAZ-20's. The Volga was offered with a three-speed transmission, either manual (a "crash box" with no synchromesh) or automatic. Front suspension was independent, while the rear was a live axle with semi-elliptical springs; there were lever shock absorbers on all four corners. Lubrication was by a central oiling system, from a drum and foot-operated pump; the oil lines were prone to puncturing, and not all of the nineteen lubricated points were supplied equally. The Volga offered front seats able to fold flat(an idea also found in the early Plymouth Barracuda) and came standard with cigareete lighter and a radio (at a time when most American-built cars did not have a radio). There were three variants: the standard M21G, an M21B taxi (with a taximeter in place of the radio and bucket seats in front instead of a bench), and a tropical model, the M21GYU, all with the GAZ leaping deer hood ornament.Drag coefficient was a surprisingly good 0.42.

The automatic transmission model would soon be discontinued, with only 700 built; it was widely criticized, it was too difficult for Soviet drivers to maintain, there were few service stations to do the work and few private mechanics qualified, and there was a shortage of transmission oil. From 1958, a three-speed manual, with synchromesh on the top two gears, was the only transmission available; this would be the M21V, while the taxi became the M21A. (The automatic would be used in the low-production GAZ-13 Chaika, which would also be maintained by professionals.) Standard equipment on all models included spare parts and two tool kits, with spanners, wrenches, screwdrivers, a tire pump, and a cans of paint to fix minor dings.

There were also export models M21D with the manual transmission and M21E with the automatic, both with a higher 7.2:1 compression engine, producing 80 hp (60 kW; 81 PS).

Second Series Volgas appeared in 1959, with a new grille, painted body or chromed; halfway through the 1959 production run (model year 1959½, so to speak), a vinyl cover was added to the dash. Added were windscreen washers and tubeless tires just before the series concluded, telescopic shocks replaced the lever type.The 1961 Volgas were priced at 5,100 rubles.

The Volga was shown at the 1958 Brussels World's Fair, the same year production for export began. It become known for having no frills but outstanding durability,. helped by the 23 cm (9.1 in) ground clearance.In 1959, a Volga took a class win at the Thousand Lakes Rally in Finland and third at the Acropolis Rally. That year, the central lubrication system was deleted, in favor of a more traditional local grease-application nipple.

Three series GAZ-21 were released, most easily distinguished by the grille. The First Series (1956-1958) featured a lattice of three large horizontal bars in the centre of which was a medallion with a star. On vehicles of the Second Series (1958-1962) was applied a grille with 16 vertical slits. Finally, the Third Series (1962-1970) received a grille with 34 thin vertical rods. In Russia, each generation of the "Volga" received its own nicknames: for example, cars of the First Series were called "Stars", the Second Series were "Shark mouths", and the Third Series "Whalebones".

The car's large size and tough construction made it popular in the police and taxi trades, and V8-engined versions (designated GAZ M23) were produced for the KGB. An automatic transmission was briefly offered in the late 1950s, but later discontinued due to lack of service stations, and then through the 1960s on the KGB's V8 version only, with the driver's controls being very similar to the discontinued "civil" automatic. The Volga M21 was produced in saloon form from 1956–70 and estate form (GAZ M22 Universal) from 1962–70. Today, it is considered a motoring icon with fans all over the world, including at least a handful in the USA (one having appeared in 1999–2001 in Boston.)

"Volga dvadtsat' odin" ("Volga Twenty One" in Russian) was produced nearly as long as the Citroen DS, and played the same role in Russian automotive culture: a legend-on-wheels. But it became quite outdated by the 1960s, leading the GAZ to develop a boxier, more modern replacement. In 1970, the M21 platform was discontinued by GAZ. Until the late 1970s, however, spare parts were produced by different plants all over the USSR, and some plants were re-building M21s using spare parts, wrecked and junked cars. In 1988, about 80,000 M21 Volgas were registered in the USSR.

One M21 was given to Yuri Gagarin after his orbital flight; Gagarin was very fond of his Volga.

The UAZ-469 all-terrain vehicle uses a GAZ-21A engine, and the RAF-977 minibus used the GAZ-21 engine and drivetrain. 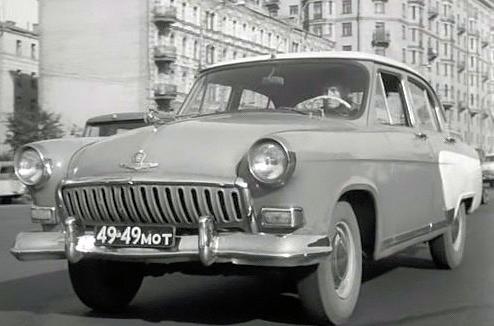