The ZIM-12 (Russian: ЗиМ-12) was a Soviet limousine produced by the Gorky Automotive Plant from 1950 till 1960. Inspired by the 1948 Cadillac Fleetwood 61 and the 1947 Buick Super, the car was built to serve mid-rank Soviet Nomenklatura, but was also readily available as a taxi and ambulance. Unlike its successors, ZIM was the only Soviet executive class full-size car that was actually made available for private ownership. A total of 21527 examples were built.

GAZ began the design process for what became the M12 in May 1948, when the Soviet government requested a six-passenger sedan for the niche between the ZIS-110 and the Pobeda, with a deadline of twenty-nine months to produce it. Given a choice between copying an American product (a Buick) or developing an entirely new model, head designer Andrei Lipgart chose the more radical course, despite high level support for simply badge engineering a Buick.

The M12 used a lengthened Pobeda chassis (with a 3,200 mm (130 in) wheelbase), and about half the drivetrain components of the GAZ-51 and -63 trucks, or the smaller Pobeda, including the 3,485 cc (212.7 cu in) inline six engine (producing 95 hp (71 kW; 96 PS), rather than the 70 hp (52 kW; 71 PS) in the truck), and the transmission. The ZIM's compression ratio was increased to 6.7:1, but it was still able to employ the 70 octane petrol (gasoline) common in the Soviet Union; this, plus an improved intake manifold and twin-choke (two-barrel) carburetor, was responsible for the increased power. The front suspension was by coil springs, with leaf springs at the rear, and hydraulic shock absorbers. It had drum brakes at all four corners. Despite lacking power steering, the 18.2:1 ratio steering box made turning fairly easy. It offered a standard three-band AM radio, at a time when radios were not standard on most American cars, even the most expensive ones.

The first car was built in October 1950, and was notionally available to average citizens; its 40,000 ruble price made purchase unlikely.

The ZIM abbreviation stands for Zavod imeni Molotova (Russian: Завод имени Молотова). Prior to 1957, the GAZ factory was officially named as Gorkovsky avtomobilny zavod imeni V.M. Molotova, or the Vyacheslav Molotov Gorky automotive factory, in honour of the Soviet Foreign Minister. All of the models carried the prefix M. However for a car of executive class, a new catchy abbreviation was introduced, and in the style of American car fashion that the vehicle was inspired by, the ZIM was used laboriously to decorate the car: the hubcaps, the bonnet, the radiator grille, even the horn button on the steering wheel. However, the Soviet Minister's career was abruptly finished in May 1957, when he lost a political fallout with Nikita Khrushchev. Following his downfall, the country underwent a renaming spree, with cities, streets, ships and factories being hastily rid of the fallen politician's name. ZIM, which was in production, from the summer of 1957 was hurriedly re-christened as GAZ-12, and all of the badges and adornments replaced by the new abbreviation. Moreover, right up until the perestroika the car was officially named labelled only as the GAZ-12, whilst unofficially it was almost exclusively referred to as the ZIM.

A prototype four-door cabriolet was built, but not produced; it was also overweight for the engine. An ambulance prototype was also built, with folding seats for medics; stretchers would be loaded through the trunk. 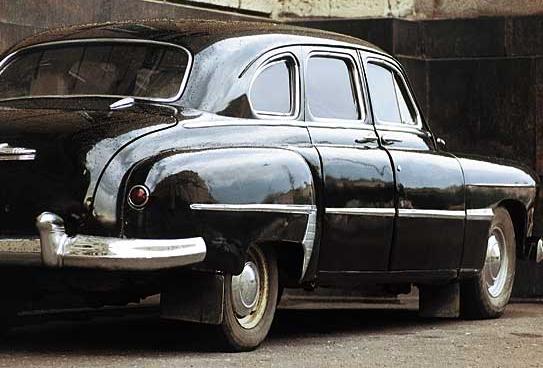