During the late 1980s GAZ developed a concept car for a future replacement for both the business -3102 Volga and the luxury limousine GAZ-14 Chaika. As stated above, the -3102 itself was envisioned as interim project that would fill the void created by the exclusiveness of the -14 Chaika. The new car would leave ZiL to handle the upper class. However the resulting GAZ-3105, which was never to be part of the Volga family, as it would be produced on the Chaika's conveyor (presently still used for the -3102) due to the economic problems never reached production.

During the early 1990s GAZ managed to survive the crises by having the Volga do a generation jump from the GAZ-24-10 to the GAZ-3110 in 1997. Simultaneously it never abandoned its quest to develop its eventual replacement, and continued designing a new car, which would feature ABS, power steering, climate control, automatic gearbox and most of all V6 and even V8 engines as standard, along with leather interiors. The external design was completely new and featured many GAZ-21 influenced retro styling cues developed in collaboration with a US-based company.

However problems began mounting in production costs, as some details had to be borrowed from the older models, at least initially such as the Chaika's axle. The pre-production models lacked the automatic gearbox, and the engine was the same ZMZ-4062.10 that went into GAZ-3110. First shown in 1998, production was scheduled to begin in 2000 with 53 cars delivered. GAZ thought of the -3111 as a replacement for the -3102 and envisioned a rate of 25 thousand per annum. But only 342 were delivered in 2001, and 20 in 2002, with further nine of 2004 before all production ceased.

GAZ-3111 was a failure in terms of marketing and demand. Its high base price and poor reputation that the Volga brand carried in the 1990s meant that those who could afford it, would opt for a foreign car such as the Mercedes E-class or the BMW 5 series with whom GAZ-3111 thought to compete. 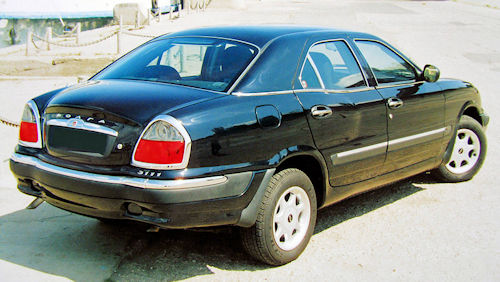