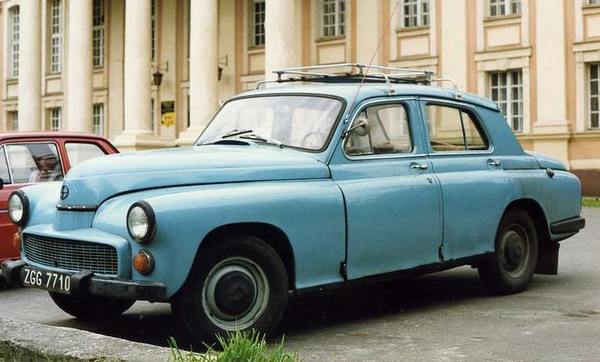 Warszawa was a Polish automobile marque manufactured from 1951 to 1973 by the Fabryka Samochodów Osobowych of Warsaw.

The Warszawa was the first new-design Polish car built after the Second World War. Warszawas were popular as taxis because of their sturdiness and ruggedness. However, due to their weight they were underpowered and had high fuel consumption. In total, 254,471 cars were made.

Named after the city of Warsaw, the Warszawa was until 1957 identical to the Soviet Pobeda, built under license, which was given to the Polish by GAZ, as Stalin's present. The first major modernisation took place in 1957. The new model was called FSO Warszawa M20 model 57, but not so long after its name was changed to Warszawa 200. New model received a restyled front-end section. The powertrain was modified too, compression ratio was raised from 6.2:1 to 6.8:1.

Since 1962 car could be equipped with the OHV I4 engine. It was much more modern than the archaic sidevalve construction used before. In 1964 the body style was changed to a Ponton, three-box design by then becoming mainstream in Europe, though the car retained a rather heavy style to western eyes.

In 1967 it was announced that Perkins four cylinder 1.76-litre diesel engines would be fitted in export market Warszawas, which were scheduled to debut at the Poznań International Fair in June 1967.