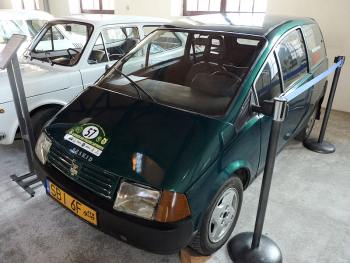 Beskid was a series of economy hatchback car prototypes in Poland designed by BOSMAL Automotive Research and Development Center during 1982-1986.

The car never went into mass production; political reasons are cited . However, it is also suggested that Beskid was in fact a back-up measure if license talks were unsuccessful; finally Fiat Cinquecento was produced in FSM. All seven Beskid prototypes were to be destroyed, but three managed to be saved.

The body style was patented, but BOSMAL lacked funds for the extension of the patent. More than 10 years later the French Renault Twingo used very similar layout although the Renault officials deny any direct influence (it is suggested that Citroën AX had similar shape in its early sketches). Renault profited off of roughly 2,400,000 Twingos.

The name comes from the Beskids mountains.