Automotive manufacturer of Le Mans;France from 1895 to 1933. 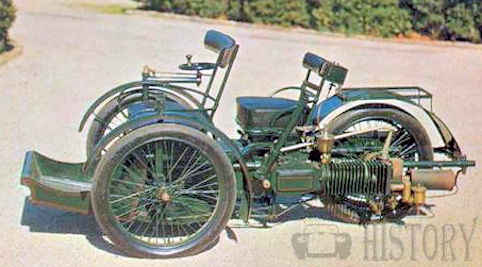 Léon Bollées tricycle Voiturette , with which he repeated his father's 18-hour drive from Le Mans to Paris in seven hours.

Léon Bollée was a French automobile manufacturer , designer of calculators and inventors . He is the son of the bell founder and automotive pioneer Amédée Bollée and brother of his other son Amédée Bollée junior.

Initially, Léon Bollée designed a tricycle that powered the car via a belt with a single-cylinder engine. He described the car as Voiturette . With this vehicle he repeated his father's ride from Le Mans to Paris, but in only seven hours, so with an average speed of 30 km / h. Several hundred of this model were built and sold. Later, he set a record on this track with an average speed of 60 km / h. From 1899 he built a four-wheeled car, the license the 1901 Darracq .

Cooperation with the Wright brothers

Wilbur Wright came to France in May 1908. At that time, no belief was given to American air reports. After ten weeks of ridicule since the end of May 1908, the first flight in France was a satisfaction. The Flyer A was assembled from May 1908 to August 1908 in the works of Le Mans . Léon Bollée supported Wilbur Wright with his factory and his hospitality. The flight tests met with the enthusiastic interest of the French public. At first hundreds of people from the area, then thousands flocked to the flights. Even celebrities arrived, z. B. Queen Margherita of Italy , King Alfonso XIII. of Spain and King Edward VII.from England. From the 1908-1909 events, Léon Bollèe shot 127 duotone photos. Wilbur died of typhus three years after returning to the United States . Léon died a year later. The widow of Léon sent 1920, when erected in Le Mans a monument to Wilbur Wright, a photo album with Leon's paintings from that time to Wilbur's younger brother Orville Wright .

The widow Bollée continued the business after Leon's death in 1913. But she sold it in 1925 to the Morris Motor Company ; the company was renamed Morris-Léon Bollée . The intention of the buyers was to circumvent the French import restrictions and to sell Morris models in France. Morris sold the company in 1931 to a group of investors, they renamed Societé Nouvelle Léon Bollée and continued production until 1933.