Automotive manufacturer of Boulogne.France from 1899 to 1901. 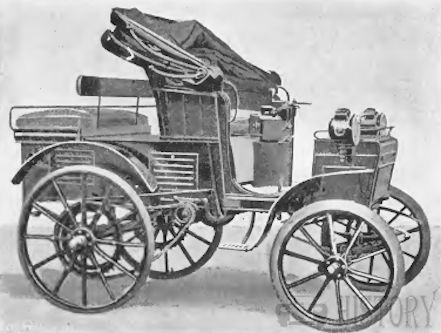 The Belgian Camille Jenatzy founded the company in Boulogne in 1899 and began producing automobiles. The brand name was Jenatzy . 1901 ended production.

The company made electric cars. A taxi company from Paris ordered 30 taxis . In addition, delivery vans emerged . The maximum speed was specified as 12 km / h.

This vehicle, built by the Société Générale des Transports Automobile of France, is a utility to accommodation for two to five persons. The extended box at the rear provides for a temporary seat, and encloses one battery and an open type motor, series wound and rated at 4 horse power, with speed regulation for 3  and 7  miles per hour. The battery is in two groups, connected in parallel for the low speed, and in series for the higher speed. In line with the armaturc shaft, a second Shaft is connected to it by a universal joint, which shaft carries two loose pinions meshing in gears keyed to the differential gear shaft that carries the driving sprockets. A clutch between the loose pinions, which are of different sizes, changes the speed for two rates, thus making four
speeds in all.

The battery is in two groups of 22 cells each, one of which is under the driver's seat, and the other at the end Of the
box extension. The steering is by the forward wheels, which are pinioned at the ends of a fixed axle. The pedal controls the band brakes on the differential gear axle, and a lever operates a wheel or emergency brake.