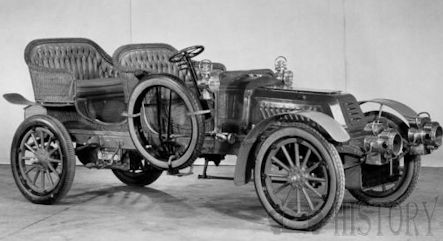 De Dion-Bouton was a French automobile manufacturer and railcar manufacturer operating from 1883 to 1953. The company was founded by the Marquis Jules-Albert de Dion, Georges Bouton, and Bouton's brother-in-law Charles Trépardoux.

Contemporaries of Count Albert de Dion, who was born in 1856, considered him an eccentric personality. His friends nicknamed him 'le Comte Sportif' since Albert de Dion was not only a skilful fencer but also one of the first motor drivers and founders of the French Motor Club.
Initially the de Dion-Bouton & Trépardoux company established in 1882, built steam-powered vehicles. As early as 1894 the Count had won the first Paris-Rouen car race with a steam tractor of his own design. After failing in the events that followed, he came to the conclusion that he petrol engine produced by Daimler of Stuttgart would do much better. His partner, Trépardoux thought this move would lead to bankruptcy, and cut himself adrift from the company. But even Daimler engines, with a 700-900 rpm range, could not satisfy de Dion, whose engines could run at 3000 rpm.

At the 1899 Paris show the first 2.6kW (3.6hp) de Dion-Bouton Voiturette was exhibited.
The 1903 was fitted with a 942 cc single- cylinder engine developing 5.9kW (8hp). For several years it was the most popular French automobile. The two-speed gearbox was operated by a lever located beneath the steering wheel. The car weighed 310kg (6831b) and it could reach 45km/h (28mph)e It was fitted with the unsprung de Dion rear axle, notable for its constant track and low weight. This axle was used mainly by the designers of racers and sports car, such as Alfa Romeo, Daimler-Benz, and Ferrari' De Dion-Bouton, whose cars are exhibited in many European car museums, ceased to exist in 1933. 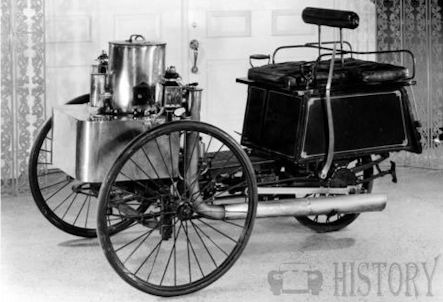 Before 1883 was over, they had set up shop in larger premises in the Passage de Léon, Paris, tried and dropped steam engines for boats, and produced a steam car. With the boiler and engine mounted at the front, driving the front wheels by belts and steering with the rear, it burned to the ground on trials. They built a second, La Marquise, the next year, with a more conventional steering and rear-wheel drive, capable of seating four.

The Marquis de Dion entered one of these in an 1887 trial, "Europe's first motoring competition", the brainchild of one M. Fossier of cycling magazine Le Vélocipède. Evidently, the promotion was insufficient, for the De Dion was the sole entrant, but it completed the course, with de Dion at the tiller, and was clocked at 60 km/h (37 mph). This must be taken with considerable care; the first official land speed record, set in 1898, was 63.15 km/h (39.24 mph). The vehicle survives, in road-worthy condition, and has been a regular entry in the London to Brighton Veteran Car Run.

Following this singular success, the company offered steam tricycles with boilers between the front wheels and two-cylinder engines. They were built in small numbers, evidently a favorite of young playboys. They were later joined by a larger tractor, able to pull trailers (sometimes called a "steam drag"). This larger vehicle introduced the so-called De Dion or "dead" axle; an axle beam carried the weight of the vehicle with the non weight-bearing driveshafts or drive chains articulated separately alongside it.(footnote: The live axle carries the weight by a rigid tube around the driveshaft, both parts fastened together.) On July 22,1894, Paris–Rouen race, it averaged 18.7 km/h (11.6 mph) over the 126 km (78 mi) route, but was disqualified for needing both a driver and a stoker.

Two more cars were made in 1885 followed by a series of lightweight two-cylinder tricars, which from 1892 had Michelin pneumatic tyres. In 1893, steam tractors were introduced which were designed to tow horse type carriages for passengers or freight (sometimes called "steam drags") and these used an innovative axle design which would become known as the De Dion tube, where the location and drive function of the axle are separated. The company manufactured steam buses and trucks until 1904. Trepardoux, staunchly supporting steam, resigned in 1894 as the company turned to internal combustionvehicles. The steam car remained in production more or less unchanged for ten years more. 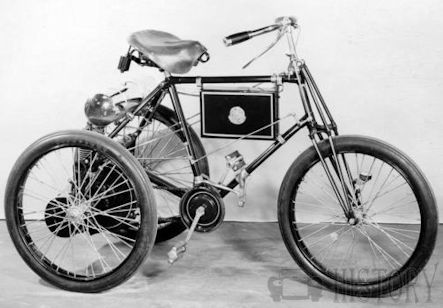 In 1895 de Dion-Bouton designed a small tricycle powered by a 0.55kW  engine. Among its features were high-tension spark- plug ignition, a contact breaker, and an accumulator. Soon the vehicle became popular with the public, and over a hundred companies used this engine in their cars, including Renault, Delage, Phébus, Adler, and even Pierce Arrow in America. By 1889, de Dion was becoming convinced the future lay in the internal combustion engine.This engine was fitted behind the rear axle of a tricycle frame bought from Decauville, fitted with the new Michelinpneumatic tires. It showed superb performance, and went on the market in 1896 with the engine enlarged to 1¼ CV (Horsepower) (932 W) 185 cc (11.3 cu in), with 1¾ CV (1.3 kW) in 1897. By the time production of the petite voituretricar stopped in 1901, it had 2¾ CV (2 kW), while racers had as much as 8 CV (6 kW). 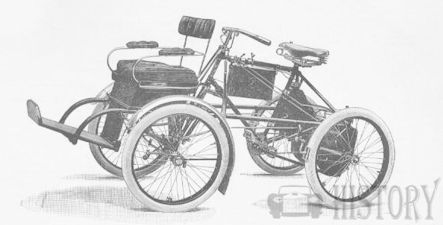 The same year, the tricar was joined by a four-wheeler and in 1900 by a vis a vis voiturette, the Model D, with its 3¾ CV (2.8 kW) 402 cc (24.5 cu in) single-cylinder engine under the seat and drive to the rear wheels through a two-speed gearbox. This curious design had the passenger infront of the driver, who sat in the rear seat. The voiturette had one inestimable advantage: the expanding clutches of the gearbox were operated by a lever on the steering column. The Model D was developed through Models E, G, I, and J, with 6 CV (4.5 kW) by 1902, when the 8 CV (6 kW) Model K rear-entry phaeton appeared, with front-end styling resembling the contemporary Renault. Until World War I, De Dion-Boutons had an unusual decelerator pedal which reduced engine speed and ultimately applied a transmission brake.In 1902, the Model O introduced three speeds, which was standard for all De Dion-Boutons in 1904. A small number of electric cars were also made in 1901.

De Dion-Bouton supplied engines to vehicle manufacturers such as Société Parisienne who mounted a 2.5 hp unit directly on the front axle of their front wheel drive voiturette the 'Viktoria Combination'.

The De Dion-Bouton engine is considered to the first high-speed lightweight internal combustion engine. It was licensed to more than 150 manufacturers and was a popular choice among assemblers of moto bicycles. The small lightweight four cycle engine used a battery and coil ignition that was less trouble than the hot tube ignition. The bore of 50 mm (2.0 in) and stroke of 70 mm (2.8 in) gave this engine an output of 1 kW (1.3 hp). It was used on many pioneering moto bicycle brands and was widely copied by many makers including US Brands Indian and Harley-Davidson.

In 1901, the De Dion-Bouton Motorette Company began manufacturing De Dion-Bouton automobiles under license in Brooklyn, New York. A small quantity of American De Dion Motorettes were made. These had either 2-seater vis-a-vis or closed coachwork and were powered by 3.5 hp American-made engines.

The venture was in operation for only one year. They gained a reputation for unreliability during that time. Representatives of De Dion in the United States claimed that the licensee violated their contract and advertised for a new licensee.

In 1900, De Dion-Bouton was the largest automobile manufacturer in the world, producing 400 cars and 3,200 engines. The company soon began producing engines and licenses for other automobile companies with an estimate of 150 makes using them. Production was so great, it proved impossible to test every engine; if it failed on the bench, it was simply disassembled. Every engine was being made by hand; the assembly line had not yet been introduced. By 1904 some 40,000 engines had been supplied across Europe. That year, De Dion-Bouton's factory at Quai National (now Quai de Dion-Bouton), Puteaux, employed 1,300 and produced more than 2,000 cars, all hand-made.

A pair of works 10 CV (7.5 kW) De Dion-Boutons, in the hands of Cormier and Collignon, ran in the 1907 Peking to Paris rally, without success. Bouvier St. Chaffray did no better in the New York to Paris in 1908. That year, De Dion-Bouton peaked as a manufacturer.

During World War I the company made gun parts, armoured vehicles, and aircraft engines, as well as cars and trucks. The company produced an anti-aircraftversion of the French 75mm field gun, the Canon de 75 modèle 1897, mounted on a V8-powered De Dion-Bouton truck for the French Army between 1913 and 1918.

The company stagnated after World War I. The V8 continued to appear until 1923, and in spite of new models with front-wheel brakes, the factory closed for much of 1927. On reopening two models were listed, the Type LA with a 1,982 cc (120.9 cu in) four-cylinder overhead valve, aluminium-piston engine, and the Type LB with a 2,496 cc (152.3 cu in) straight-8. The latter was very expensive and sales were few, despite growth to 3 litres (180 cu in) in 1930. A rumored takeover by Peugeot or Mercedes did not materialize, leading to the end of passenger car production in 1932.

Small numbers of commercial vehicles were made until 1950; the last vehicles to carry the De Dion badge were licence-made Land Rovers in the early 1950s. The company name was bought by a motorcycle maker in 1955. 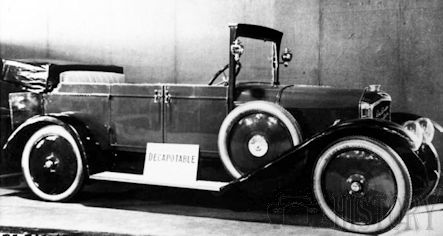