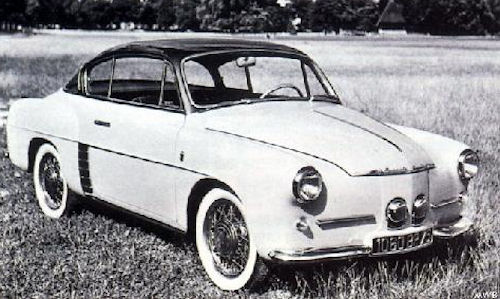 Autobleu was a small, short-lived French automobile maker based in Paris.

The company was established in 1950 by Maurice Mestivier and Roger Lepeytre. Its original business involved manufacturing components which buyers could use to make their Renault 4CVs go faster. The Renault 4 CV was France’s best selling car at this time, and its advertised power output was increased to 17 hp (13 kW) for 1950. The company became known for manufacturing an improved inlet manifold for the little Renault and coupling this with an appropriately adapted carburettor.

The Renault 4 CV stayed at the top of the sales charts for some years and business must have flourished for Autobleu. In May 1953 the press were summoned and the company presented a small stylish luxurious coupé car based on the mechanical underpinnings of the Renault 4CV. The body had been designed and put together by Ghia of Turin. The car used a steel frame but coated with aluminium panels. The aluminium industry had been developed rapidly in connection with aircraft construction during the Second World War period, and in the 1950s several French and UK car manufacturers made extensive use of aluminium panels, although the material fell out of favour in the later 1950s as aluminium prices increased, and the reluctance of customers to pay the extra for aluminium bodies cars may have played a part in the company's demise, just as it damaged the market for the better remembered Hotchkiss Grégoire and the later Panhard cars.

The Autobleu’s body incorporated several futuristic styling cues including far less discrete air inlets ahead of the rear wheel arches than were featured on the Renault 4 CV. These resembled the equivalent air inlets that would be adapted by Renault themselves for their new Dauphine model when launched in 1956.

The engine was the familiar 747 cc unit from the Renault 4 CV from which, in this application, a maximum of 25 hp of output had been coaxed, supported by the Autobleu hallmark inlet manifold and an adapted Solex carbureter. A maximum speed of 115 km/h (71 mph) was claimed.The emphasis was on style and elegance rather than on out-and-out performance. Nevertheless, in later cars the 747 cc engine was replaced by the 845 cc unit from the Renault Dauphine.

The engine was positioned at the back of the car and was water-cooled; as on the Renault, the radiator was mounted between the engine block and the passenger cabin. The three-speed gear box was also located, with the engine, behind the cabin.

The Autobleu itself went into production towards the end of 1953. There was a larger model based on the chassis of the larger Renault Fregate . By 1958 Autobleu was no longer listed as an automaker. 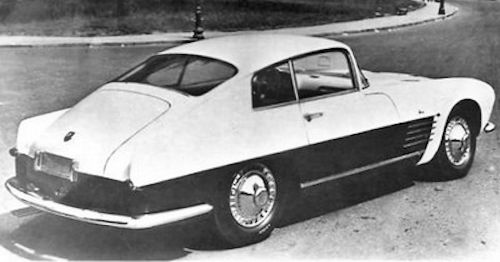