Vinot-Deguingand was a French automobile producer.

At least one source gives the name of the business as Vinot & Deguingand while others insist that Vinot-Deguingand is the correct name and another states that from 1907 the business was called simply Vinot.

In 1906 or 1909 Vinot acquired Gladiator and until 1920 two virtually identical ranges were offered with the Vinot and the Gladiator names.

The company also owned a London based subsidiary called "Vinot Cars Ltd" which often provided for Vinots to have their bodywork fitted by locally based English coach-builders.The early cars sold in England were sold under the name "La Silencieuse".

After the war manufacturing activity was transferred to newly acquired premises at Nanterre on the west of Paris. However, production ended in 1926 in response to a falling away in customer demand. The factory was sold to Donnet-Zédel. It was later sold to Henri Pigozzi and became the principal production location for Simca-Fiat (subsequently Simca)

Lucien-Marie Vinot-Préfontaine having died in 1915, Albert Deguingand in 1927 founded another auto-maker, named Société des Nouveaux Ateliers A. Deguingand, which would last till 1929 or 1930.

Less than a year following the outbreak of peace, in October 1919 the manufacturer took a stand at the 15th Paris Motor Show and exhibited the 12CV Vinot-Deguignand Type BO, which sat on a 3,030 mm (119.3 in) wheelbase and was powered by a 4-cylinder engine of 2603cc. 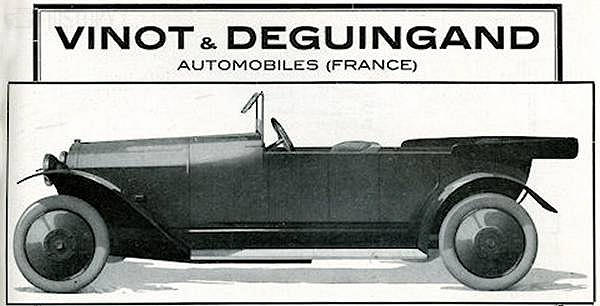