Manufactured by Société A. Darracq, Suresnes, France In the late 1800s a large number of car companies were established in France, among them Berliet, Darracq, Décauville, de Dietrich, and Mors.
In 1897 Alexander Darracq established the Sociéte A. Darracq. His cars, produced at Suresnes, played an important röle in helping other car companies to get launched. Darracq had agencies in Britain, Italy, and Germany. The Opel brothers were the first German car entrepreneurs producing the Opel-Darracq vehicle under French licence. In 1909 the Italian Darracq agency became a new company, Anonima Lombarda Fabbrica Automobili, manufacturing a wide range of models under the ALFA trademark. After the First World War it was known as Alfa Romeo.
Darracq was the first company to design a car with an eight-cylinder engine. This was the Grande Voiture Darracq, built in 1905, which was destined to break speed records. The car had a 22.5 litre V8-engine with bore and stroke of 160 x 140mm, developing 137kW (200hp) at 1200 rpm.

In 1913 the company produced the Darracq 13, having a 1.4 litre four-cylinder in-line engine. The car developed 9.6kW (13hp) and had a top speed of 70km/h (43mph). The chassis, with rigid axles was suspended on semi-elliptic springs.
The last Darracq was sold in 1928. Then the firm merged with the French Talbot and British Sunbeam, and the STD motor company was established.
became the majority shareholder in Sunbeam-Talbot-Darracq ('STD Motors') which was sold to the Rootes group in 1935 such that Darracq ceased to be a distinct marque, instead becoming a badge-engineered Sunbeam.

Using part of the substantial profit he had made from selling his Gladiator bicycle factory to Adolpe Clément, Darracq began operating from a plant in the Paris suburb of Suresnes. The company started with a Millet motorcycle, powered by a five-cylinder rotary engine, but shortly introduced an electric brougham, and in 1898 a Léon Bollée-designed voiturette tricar. This proved a débâcle: the steering was problematic, the five-speed belt drive "a masterpiece of bad design", and the hot tube ignition crude, proving the £10,000 Darracq had paid for the design a mistake.

In 1900, the company produced its first vehicle with an internal combustion engine. Designed by Ribeyrolles, this was a 6.5 hp (4.8 kW; 6.6 PS) voiture legére powered by a 785 cc (47.9 cu in) single, and featured shaft drive and three speed column gear change. While not as successful as hoped, one hundred were sold. In 1902, Darracq signed a contract with Adam Opel to jointly produce vehicles in the German Empire under licence, with the brand name "Opel Darracq".

The Darracq automobile company prospered, such that, by 1903, four models were offered: a 1.1 litre single, a 1.3 l and 1.9 l twin, and a 3.8 l four. The 1904 models abandoned flitch-plated wood chassis for pressed steel, and the new Flying Fifteen, powered by a 3 l four, had its chassis made from a single sheet of steel Its exceptional quality helped the company capture a ten percent share of the French auto market.

In 1906 the company expanded to Portello, a Milan suburb in Italy. They established Società Italiana Automobili Darracq (SIAD) through a license arrangement with Cavaliere Ugo Stella, an aristocrat from Milan. The business did not do well and Darracq shut it down in 1910. A new partnership, Anonima Lombarda Fabbrica Automobili (ALFA), acquired the business, which in 1914 was taken over by Nicola Romeo, who created Alfa Romeo.

A venture into steam buses designed by Leon Serpollet did not prove successful; only twenty were sold, and the company lost money on the project.

Returning to an 1898 idea by Alexandre Darracq to build low-cost, high-quality cars, much as Henry Ford was doing with the Model T, Darracq introduced a £260 14–16 hp (10–12 kW; 14–16 PS) model in 1911. These, at the founder's insistence, would all be cursed with the Henriod rotary valve engine, which was underpowered and prone to seizing. It proved disastrous to the marque, and Alexadre Darracq resigned.

In 1913, Alexandre Darracq sold out to British financial interests led by Owen Clegg, who relocated to the Paris headquarters to take over as the Managing Director of the company. Clegg, designer of the proven Rover Twelve, sensibly copied the Twelve for Darracq's new model. The factory at Suresnes was retooled for mass production, making it one of the first in the industry to do so. The 16HP Clegg-Darracq was joined by an equally reliable 2.1-litre 12HP car, and soon the factory was turning out sixty cars a week; by 1914, 12,000 men rolled out fourteen cars a day.

During the First World War, the Darracq factory was converted to the production of various war materials.

After the War, as soon as the Suresnes factory had ceased to produce munitions, arms and planes in support of national defence, automobile production resumed. By the time of the Motor Show in October 1919 the prewar 14HP "Type V" had returned to production, featuring a four cylinder 2,940cc engine. But the manufacturer's big news at the Paris show was the 24HP "Type A", powered by a V8 4,584cc unit. This model had also been initiated by Managing Director Owen Clegg back in 1913, but production had been delayed by intervening events till 1919. The "Type A" featured four forward speeds and, from 1920, four-wheel brakes. Despite these innovative features, it did not sell well.

The prewar 16HP also reappeared after the war and was the manufacturer's top-selling car in Britain.

In October 1919 Darracq bought the London-based firm of Clément-Talbot in order to import Talbots into England from France, Talbot models were then marketed as Talbot-Darracqs.

In 1920 Darracq acquired 'Jonas Woodhead and Sons', Leeds based manufacturers of springs for motor vehicle suspension.

On August 13, 1920, Automobiles Darracq S.A. acquired a majority shareholding in the Sunbeam Motor Company of Wolverhampton, merging the companies to create Sunbeam-Talbot-Darracq, or 'STD Motors'. 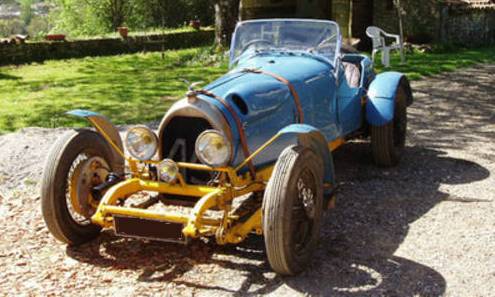 In 1935 Sunbeam-Talbot-Darracq was purchased by the Rootes Group although the French branch of Talbot was sold separately to Antonio Lago, becoming Talbot-Lago. Darracq ceased to be a distinct marque, instead becoming a badge-engineered Sunbeam.

Like other automobile makers in this era, such as Napier, Bentley, and Daimler, Darracq participated in motor racing, and Darracq's drastically stripped-down voitures legére garnered publicity. A 1904 effort to win the Gordon Bennett Trophy, however, was disastrous: despite entries of identical 11.3 l cars built in Germany, France, and Britain (per the Trophy rules), Darracq scored no success.Paul Baras drove a Darracq to a new land speed record of 104.53 mph (168.22 km/h) at Ostend, Belgium, on November 13, 1904. A 1905 racer was more promising. Fitted with a 22.5  overhead valve V8 made from two Bennett Trophy engines mated to a single crankcase, producing 200 hp (150 kW; 200 PS), making it one of the first specialized land speed racers,and on December 30, 1905, Victor Hémery drove this car to a speed of 109.65 mph (176.46 km/h) in the flying kilometer at Arles, France. The V8 was shipped to Ormonde Beach, Florida (then host to numerous land speed record attempts), where it was timed at 122.45 mph (197.06 km/h) in 1906 to win the title "1906 King of Speed"; this was not enough to hold the land speed record, however, which went to a Stanley, the Rocket, at 127.6 mph (205.35 km/h).On return to Europe the car was sold to Algenon Lee Guinness who set many records over the next few years until the car was retired in 1909 with a broken piston. This V8 Special(see full story at ) was rebuilt in 2005 using its original engine which had survived mostly intact.

Darracqs won the 1905 and 1906 Vanderbilt Cup at Long Island, New York, both credited to Louis Wagner in a 100 hp (75 kW; 100 PS) 12.7 l racer. Darracq also won the Cuban race at Havana. The company's final racing victory was the 1906 Vanderbilt Cup. Competition efforts did not stop entirely, however. In 1908, Darracqs came second, third, and seventh at the "Four Inch" Isle of Man Tourist Trophy, and in 1912, Malcolm Campbell entered a former works Darracq at Brooklands.

The 1904 Darracq was the heroine of the movie Généviéve. This film, made in 1952, was based on the annual 'oldtimer' London- Brighton run. The central 'character' of the film was a Darracq automobile, a two-seater fitted with a twin-cylinder engine developing 8.8kW (12hp). It was lent by Norman Reeves, a car businessman, afterwards nicknamed 'Mr. Généviöve'. 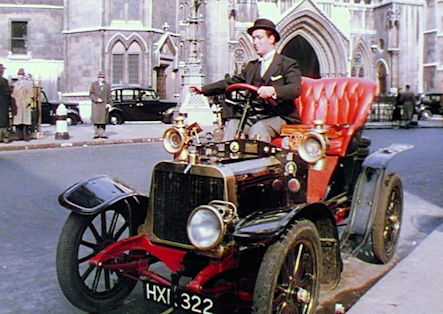