Current third generation of the Ford Ranger now consolidated the worldwide production of the Ranger onto a single model platform from 2011 on.

New features include the 2.2-liter TDCi diesel engine with four cylinders, automatic start-stop, voice assistance, lane assist and rear-view camera as well as downhill control and hill-start assist. The Ford SYNC-2 system now includes the Emergency Call Assistant. As of September 2016, all models will have an SCR system and thus comply with the Euro 6 emissions standard .

The equipment lines are offered XL , XLT , Limited and Wildtrak . As a body variant , the Ranger is available as a single cabin with two seats, extra cabin ( with two additional seats or a double cabin with three additional full seats.

The Black Edition was introduced. The vehicle is of the equipment based on the Ranger Limited and only available in black. Attachments such as alloy wheels, the "sports bar" or the grille are also black. The Black Edition is only available as a twin cab with the 3.2-liter engine with 147 kW (200 hp), the standard equipment includes a park-pilot system with rear view camera and a hitch.

In 2018 , the Ranger III was restyled a second time and was first marketed in the United States. And 2019 to see this third phase land in European countries, with more technical than stylistic changes. Indeed, only the front bumper is affected, with a redesigned outline of the front fog lights. As for engines, the Ford Ranger will ignore the 2.2-liter and 3.2-liter DuraTorq TDCi shortly after the release of phase 3, to leave a 2.0 EcoBlue available in several power levels. The latter can be coupled to a new automatic gearbox, inaugurated on the Ford Mustang. It should also be noted the appearance of LED headlights in this final phase, replacing halogen lighting that deemed to be too weak.

On the commercial vehicle show in Birmingham, UK in April 2018, Ford,presented the special model Wildtrak X. Powered by a 3.2-liter five-cylinder diesel engine rated at 147 kW (200 hp), the power is transmitted to all four wheels via a six-speed automatic transmission. The Wildtrak X is available with a double cabin and painted in the color Performance Blue , some body and attachments and the rims are in black color. The black leather seats have gray stitching.

In August 2018, the Raptor was presented at Gamescom in Cologne .Visually, the special model is based on the F-150 Raptor and is a high-performance truck optimized for off-road driving.

In addition to the standard equipment Ford offers for the Ranger an extensive desired and additional equipment. These include an "off-road package" with limited-slip differential and underrun protection, several different cargo compartment covers, protection pans for the cargo hold and a hardtop for extra and double cabins . 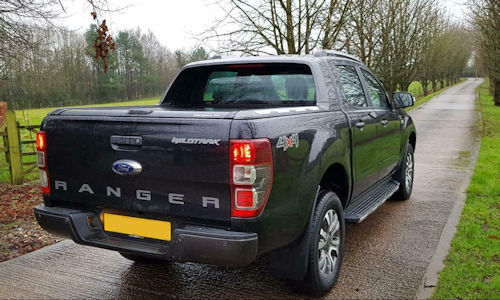