For the first time in 17 years, the E-Series underwent an exterior redesign for the 1992 model year. A far more aerodynamic exterior was used over the same platform architecture. As before, the powertrain consisted of a 4.9 L inline six, 5.0, 5.8, and 7.5 liter V8 engines, or a 7.3 L diesel V8. Inside, an all-new drivers' compartment allowed for more room for drivers and improved ergonomics. On all models except the Econoline 350, the steering wheel was now equipped with an airbag; this was a first for a full-size van. The consumer-oriented Chateau Club Wagon version was Motor Trend magazine's Truck of the Year for 1992. While all 1992–1993 model year Econoline vans equipped with air-conditioning used R-12 Freon, Ford began using CFC-free R134a refrigerant in 1994 models beginning in late summer or early fall of 1993. The Econoline received a CFC-free air-conditioning system in September 1993, or earlier. The same is true for all 1994 Ford trucks and SUVs, including the Bronco, F-series, Ranger, and Explorer.

The only visible exterior change for 1995 was the deletion of the amber turn signals in the tail lights, used from 1992 to 1994. In Canada, the Econoline name was dropped in favor of E-Series (this remained in the United States until 2002).

A major change of the engine lineup was made in 1997; only the 7.3 L diesel remained from the year before. A 4.2 L Essex V6 replaced the 300 inline-6 and the 7.5 L/460 V8 was replaced by a 6.8 L Triton V10. The 5.0L/302 and 5.8L/351 Windsor V8s were replaced by 4.6 L and 5.4 L Triton V8s, respectively. The Econoline received an updated front end with a new grille that featured an oval cutout and new lower front bumper trim. Inside, an ergonomic dashboard layout containing dual airbags was introduced.

For the 1999 model year the Club Wagon full-size passenger van was renamed the Econoline Wagon. The cargo van iteration remained being called Econoline.

Along with a minor update, 2001 brought a major change to the Ford full-size van lineup; the Econoline and Econoline Wagon names were discontinued. For the first time on all models, the "E-Series" name replaced Econoline, and was sold as such in the literature on commercial vans and ambulance packages, another category dominated by Ford. Heavy-duty cutaway van models, most often used in large box vans and Class C recreational vehicles, also featured "E-350" or "E-450" badging on the front fenders.

To replace the Club/Econoline Wagon (and the previous Chateau models), Ford introduced E-150 Traveler model targeted at families. The Traveler would be a short-lived model, however, as minivans and SUVs were by this point far more popular for passenger use. But as full-size vans had the towing and payload (and optional diesel power) of full-sized pickups and room for eight to 15 passengers plus their baggage, a certain segment of customers continued to buy the E-Series (and, to a lesser extent, its competitors from GM and Chrysler).

For 2003, Ford updated the E-Series by enlarging the grille; the Ford logo also shifted from the hood to the grille. A new engine cover, cup holder, and glove box was also added.

The year 2004 saw the replacement of the 7.3 L Power Stroke diesel and the introduction of the new 6.0 L Power Stroke with more power than the 7.3, but still detuned from the same engine in the F-Series due to a lack of airflow in the engine compartment. The 6.0 Powerstroke is intercooled, however, the 7.3 L lacked an intercooler.

Inside, a new gauge cluster was also added; it included a tachometer along with a digital odometer.

A hydrogen-fueled version of this engine powers an E-450 shuttle bus produced since 2007, used first in airports in Vancouver, British Columbia and Orlando, Florida.

Ford introduced the new E-Series at the New York Auto Show in March 2007. The van received completely redesigned front end sheet metal similar to that of the 2008 Ford Super Duty trucks. It has been overhauled with better handling and more payload.

Updates to the front end of the van include larger headlights, a larger grille, and a longer hood than previously used on E-Series and Econoline vans. The 6.0 L turbo diesel is retained on the E-Series, while Super Duty received the new 6.4 L twin turbo diesel. Gasoline engines carried over. A series of upgrades to the braking, suspension and steering systems have resulted in improvements in ride and handling, braking performance and load carrying capability, although the Twin-I-Beam front suspension remains. Four-wheel drive is available through Ford Fleet Truck using current model year Super Duty parts.

In 2009 the E-Series received a new dashboard, complete with Ford's new Sync system, available in-dash navigation and upfitter switches as used in the F-Series Super Duty trucks. Also included is a passenger-side glove compartment, a first for the E-Series; previously, the glove compartment was integrated in the engine cover. Another new 2009 option was the rear-view backup camera, which is becoming widely available throughout the industry on smaller vehicles; it is another first for Ford in the full-size van field. Ford is the first automotive manufacturer to offer a full-size van that is capable of using E85; this option is most commonly available on Ford's F-150 with the 5.4 L engine. It was available on the 2009 4.6 L and 5.4 L engines.

The 6.0 diesel was discontinued at the end of the 2010 model year. There was no diesel replacement for the 6.0 and the 6.8L V10 takes its place in the engine line up. Ford did not offer the new 6.7 diesel found in Super Duty trucks due to space limitations. It is unconfirmed whether this means it physically does not fit or there is not enough space to cool properly. 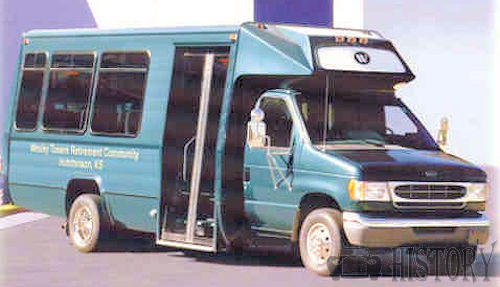