For 1964 the Thunderbird was restyled in favor of a more squared-off, "formal" look. The Thunderbird's sporty image had by that time become only an image. The standard 390-cubic-inch 300 bhp (224 kW) V8 engine needed nearly 11 seconds to push the heavy T-bird to 60 mph (96 km/h), although with enough room a top speed of about 120 mph (200 km/h) was obtainable. The softly sprung suspension allowed considerable body lean, wallow, and float except on smoothly surfaced highways; there was an export suspension package available as special order. Contemporary testers felt that the Buick Riviera and Pontiac Grand Prix were substantially more road-able cars, but the Thunderbird remained the leader of the market segment.

The revised model was initially offered as a hardtop, a convertible, or Landau, with vinyl roof and simulated landau irons. The tonneau cover and wire wheels of the Sports Roadster remained available as a dealer-installed option, although only 50 were sold from the factory. Total 1964 sales were excellent: 92,465, up nearly 50% from the previous year. The 1964 Thunderbird was the only car to have the word 'Thunderbird' on the front hood instead of the image of the Thunderbird.

Several features intended for the new generation were delayed until 1965, when front disc brakes became standard equipment and sequential turn signals were added. The latter feature flashed the individual segments of the broad, horizontal tail lights in sequences from inside to outside to indicate a turn. The delay resulted from legal difficulties with various U.S. state laws on vehicle lighting. Sales, impacted by increasing competition (including from Ford's own Mustang), dipped to 74,972.

For 1966 the 390-cubic-inch V8's power was increased to 315 bhp (235 kW). The larger 428-cubic-inch (7.0 L) V-8 became optional, rated at 345 gross horsepower (257.4 kW) and providing a notable improvement in 0-60 acceleration (to about 9 seconds). A new Town Hardtop model was offered, featured a roof with blind quarter panels for a more 'formal' look (at the cost of rear visibility). The Landau model was replaced by the Town Landau, which retained the previous model's padded roof and landau S-bars, but applied them to the Town Hardtop's formal roof. The Town Landau was by far the best-selling model, accounting for 35,105 of the 1966 model's 69,176 sales.

There was a very rare special order 427 available through certain Ford dealers for 1963-1965 Thunderbirds, 120 of these "high performance" models were made. Only six are still known to exist today. (unfortunately Ford records do not support this claim and no documentation exists to suggest it is true. Provenance is needed to show actual existence as none of the cars preferred as legitimate have supporting documentation such as Ford build sheets or appropriate supporting paperwork. The existence of these cars is at this point only on the owners say so and is considered hearsay at this time. The only known 427 cars from the original time frame were dealer built cars from performance oriented car dealers like Tasca Ford who's dealer built 427 Tbird was featured in CARS magazine in 1964.)

A black 1964 convertible later had a major role in the TV series Highlander: The Series as protagonist Duncan Macleod’s main mode of transportation. , a red 1966 Thunderbird convertible was featured in the 1983 film The Outsiders which was directed by Francis Ford Coppola, and a green 1966 Thunderbird Convertible was featured in the David Lynch film Wild at Heart, starring Nicolas Cage and Laura Dern. 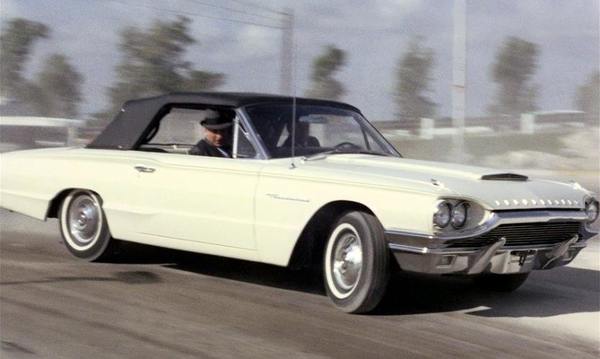 A 1966 Ford Thunderbird in Thelma & Louise