In 1972, a radical change occurred in the Torino and Ranchero lines. The sleek, pointy look of the previous year's model was replaced with a larger, heavier design. Most prominent was a wide, gaping 'fishmouth' grille and a new body-on-frame design. There were still three models available; the now-standard 500, the new Squire with simulated woodgrain "paneling" along the flanks, and the sporty GT. Engine choices remained basically the same beginning with the 250 cubic-inch six-cylinder and a selection of V8s that ranged from the standard 302 to Cleveland and Windsor series 351s, plus the new-for-1972 400. The 385-series V8 (the 429 for 1972-73; the 460 for 1974-76) was still available. However, all suffered from lower compression ratios to better meet new emissions standards. The 351 cu in (5.8 L) Cleveland could still be obtained in tuned 4-V Cobra Jet form through 1974. A four-speed manual transmission was available on Cobra Jet-powered GT models.

The 1973 Ranchero saw a redesigned front end to meet new federal standards for front impact protection. Aside from slight cosmetic differences, the Ranchero would remain basically the same until the Torino's final year, 1976.

The character of Harvey Leek on the TV show Nash Bridges drives a 1972 Ranchero. 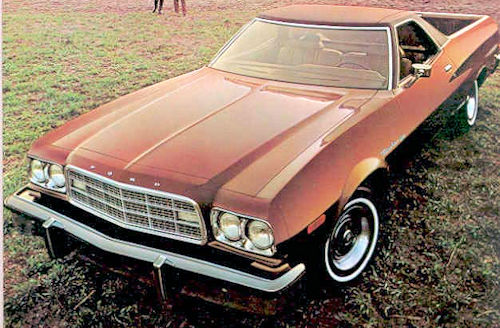