In 1968, the Fairlane line was supplemented by the new Torino, and the Ranchero followed suit, becoming the largest model since the full-sized 1959. Overall, the new Ranchero was not only bigger, but also more angular than before with its more horizontal grille and horizontal headlamps; Ford and other automakers were making a switch back to horizontal quad headlamps. The interior was all new, as well, sharing the Torino/Fairlane's distinctive four-pod instrument cluster. Though the four round pods gave the illusion of an engine-turned dash, viewed from left to right, they instead featured warning lights for coolant temperature (both cold and hot) and the left turn signal indicator in the left pod with the speedometer in the second pod directly in front of the driver. Warning lights for the charging system and oil pressure as well as the right turn signal indicator were located third from the left. In upscale models, this pod was supplanted by a tachometer. An optional clock filled the fourth pod; a decorative "clock delete" panel otherwise filled the space. A seat belt warning light was a new feature, too, lighting briefly in the far left pod whenever the engine was started. The model line also featured wraparound front side marker lamps which doubled as parking lights and rear side reflectors, newly mandated by US law for the 1968 model year.

Three trim levels were offered, beginning with the sparsely trimmed base Ranchero, the Ranchero 500 trimmed like the corresponding Fairlane 500 and the top-of-the line Ranchero GT with its Torino GT trim. Engine choices began with the 250 cubic inch I6 and ran to several V8 choices, including the standard 289 with two-barrel carburetor, and the FE-based 390. The powerful 428 cu in (7.0 L) Cobra Jet, another FE derivative and the largest engine offered in the Ranchero to date, was a mid-1968 option. The 1968 model marked the final year of production of the 289; a 302 cu in (4.9 L) V8 with two-barrel carburetor became the standard V8 in 1969. Two new upmarket engine choices were available, the 351 Windsor with two- and four-barrel carburetion. The FMX automatic was available with both, which was a variant of the old Cruise-o-Matic and was offered exclusively with either 351.

Like the Torino/Fairlane, the Ranchero could be had with virtually all of the same options as its cousins, including air conditioning, bucket seats, center console, AM/FM radio, optional wheels, front power disc brakes, hood scoop (standard on GT) and even a vinyl top. Changes across the 1969 model line were slight and included a flatter three-piece grille less the horizontal crossbar and Ford crest, relocation of GT grille badging from the crest to the lower right corner of the grille as viewed from the front, a change from black-faced instruments with white numerals to brushed aluminum with black numerals and a slimmer, two-spoke steering wheel pad similar to those across the Ford product line, unlike the wheel with its broader "safety pad" and separate horn ring used in the 1968 intermediates and compacts. While the pad may have changed, the horn ring did not. The only change unique to the Ranchero was the relocation of the "Ranchero" script from the rear quarter panels to the front fenders.

A little-known and extremely rare offering in 1969 was the Rio Grande. Available on special order, this was essentially a GT in the so-called "Grabber" colors of "Wimbledon White", "Poppy Red" or "Calypso Coral", partially blacked-out hood with scoop, side stripes, bed rails, vinyl top and unique "Ford Ranchero Rio Grande" wheel centers. As a result, Rancheros so equipped received Ford's "SPECIAL PERFORMANCE VEHICLE" identification on the data plate regardless of engine choice. These vehicles may be identified by the aforementioned designation, as well as a blank space where the trim code would normally be found. Production figures are unclear, but may have been around 900 total units. 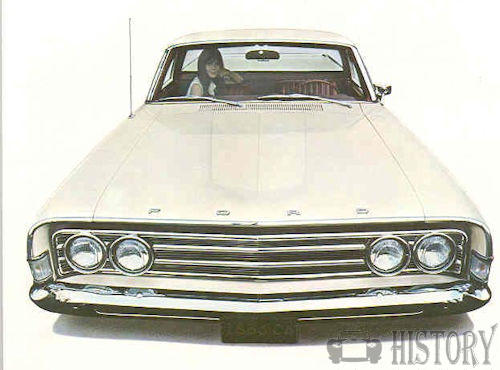