1966 was a one-year model, when Falcon and Fairlane were redeveloped on the same basic platform, one which did not include the sedan delivery as 1965 marked the final year of sedan delivery production. Instead, the 1966 Ranchero used Falcon front sheet metal, trim and interior accents on a modified station wagon platform.

Engines available were the 170 cu in (2.8 L) I6, 200 cu in (3.3 L) I6 and two- and four-barrel versions of the 289 cu in (4.7 L) V8. Transmissions choices ranged from the C4 three-speed automatic to the three-speed column-shifted manual. The 1966 model was marketed simply as the Ford Ranchero, and did not carry Falcon badges. Seat belts were standard.

The 1967 Ranchero, based on the post-'66 Falcon/Fairlane chassis, used the basic 1966 Ranchero body with Fairlane trim, front sheet metal, and interior treatments instead of Falcon. It was marketed as the Fairlane Ranchero.

This was a well-received and unique one-year vehicle, with clean, straight lines, dual stacked headlamps, and plenty of power; the Ranchero had entered the muscle car arena in 1967. Engine options started with a 200 cu in (3.3 L) straight-6 and went up to a 390 cu in (6.4 L) FE-series big-block V8 giving 315 bhp (234.9 kW) and backed by an optional C6 automatic, the new-for-1966 heavy duty variant of the C4. 1967 also saw the largest expansion of trim levels since the vehicle's introduction ten years prior. Supplementing the base model were the new Ranchero 500, 500/XL and GT. The GT-A, Ford's label for '66 and '67 automatic transmission-equipped GTs given to both the Fairlane and Mustang, did not apply to the Ranchero.

What did apply to all American cars in 1967 was the use of a dual-circuit braking system with a dual-chambered master cylinder. Increased awareness of passenger safety resulted in such innovations as safety-padded windshield pillars and an unusual 1967-only safety pad which protruded from the center of the three-spoked steering wheel to a point just beyond the rim of the steering wheel. It was designed to minimize abdominal injuries in the event of a collision.

It has been reported that the Ford Ranchero was the favorite vehicle of Elvis Presley. Indeed, he owned a 1967 Ford Ranchero 500, purchased new in 1967 by Elvis, for use on his small ranch in Northern Mississippi. This Ranchero reportedly now belongs to the Museum of Automobiles near Morrilton, Arkansas. 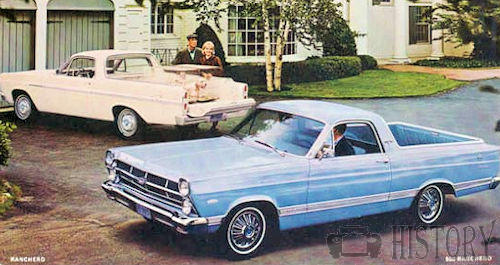