In 1952, Ford expanded station wagons into a lineup separate from its newly redesigned sedans. The Country Squire was the top model, now available solely in a four-door configuration; it was the wagon counterpart of the Crestline series. Joining the Squire were the four-door Country Sedan (Customline) and the two-door Ranch Wagon (Mainline).

Unlike its predecessor, the 1952 Country Squire no longer was a true woodie; like the Country Sedan, it wore a full steel body. The woodgrain finish was now constructed by woodgrain transfers edged in real wood trim on the sides and tailgate. 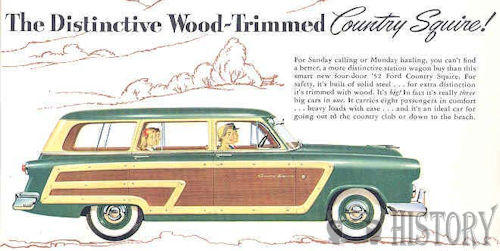