The Bronco received a major redesign for 1980, coinciding with the F-Series. The new Bronco was shorter, and had cosmetic changes along with powertrain, suspension and other odds and ends. Most notably, the live front axle was replaced by a Dana 44 Twin Traction Beam (TTB) setup in the front end for an independent front suspension. The TTB is a hybrid of a true independent front suspension and a solid front axle, with a "solid" axle that pivots around the differential and uses coil springs instead of leaf springs. The TTB system offered a higher degree of control and comfort both on and off road, but sacrificed wheel travel, and is notorious for being difficult to keep aligned when larger than stock tires are used. 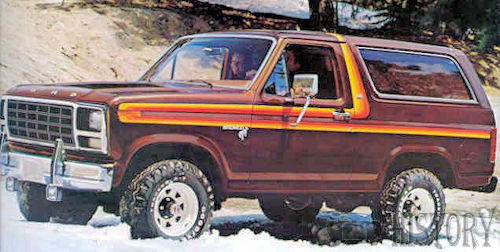 With a smaller Bronco and fuel economy in mind, Ford offered a 300 cu in (4.9 L) straight six as the base engine. Though this engine came with more torque than the 302 cu in (4.95 L) V8 and comparable to the 351 cu in (5.75 L) V8 (until the High Output model), it was limited by a 1-bbl carburetor and restrictive single-out exhaust manifolds. Electronic emissions equipment added in 1984 further reduced the power of the inline six. Ford used up their remaining stock of 351M engines before turning over to the 351W in mid-model year 1982. A "High Output" version of the 351W became an option in 1984 and continued well into the 1987 model year until the introduction of fuel injection. Output was 210 hp (157 kW) at 4000 rpm vs the standard 2-bbl 351W which made 156 hp (116 kW) at 4000 rpm. The 302 was the first engine to receive electronic fuel-injection, starting in the 1985 model year, as well as a four-speed automatic overdrive transmission. The Eddie Bauer trim package started in 1985 as well. From 1980 to 1984, some Broncos had sliding topper windows. 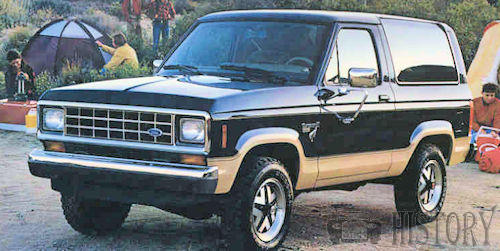 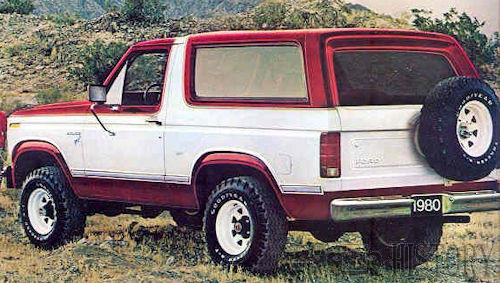 A Ford Bronco Third Generation, in James Bonds  A View to a Kill 007 Movie owned by Chuck Lee