In 1987, the body and drivetrain of the fullsize Bronco changed, as it was still based on the F-Series. The new aero body style reflected a larger redesign of many Ford vehicles for the new model year. By 1988, all Broncos were being sold with electronic fuel injection (first introduced in 1985 with the 302). In 1991, a 25th Silver Anniversary Edition was sold featuring special badges, Currant Red paint and a gray and red leather interior. A Nite edition, similar to that on the F-Series, was also available in 1991 and 1992, the 91's tend to be rarer. All Broncos were built at the Michigan Truck Plant in Wayne, Michigan on the same line as the F-150.

A V8 engine and automatic transmission were standard in Eddie Bauer, Nite, and Silver Anniversary trucks. 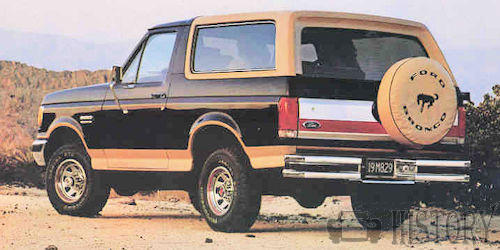