The 1965 Galaxie was an all-new design, featuring vertically stacked dual headlights in what was becoming the fashionable style in a car somewhat taller and bulkier than the previous year's. The new top-of-the-line designation this year was the Galaxie 500 LTD. Engine choices were the same as 1964, except for an all-new 240 cu in (3.9 L) six-cylinder and 1965 289 cu in (4.7 L) engine replacing the 50s-era 223 "Mileage-Maker" six and the 352 being equipped with dual exhausts and a four-barrel carburetor.

Suspension on the 1965 models was dramatically redesigned. Replacing the former leaf-spring rear suspension was a new three-link system, featuring all coils. Not only did the ride improve, but handling also got a boost, and this system was used for NASCAR in the full-size class. Interiors were like the 1964 models, but a new instrument panel and two-way key system were introduced.

A new model was introduced for 1966; the Galaxie 500 7 Litre, fitted with a new engine, the 428 cu in (7.0 L) Thunderbird V8. As the name suggests, this engine was also available on the Ford Thunderbird and was a response to a demand for a more docile, tractable engine than the racing-built 427. The 1966 body style was introduced in Brazil (Ford do Brasil) as a 1967 model; it had the same external dimensions throughout its lifetime until Brazilian production ceased in 1983. In response to safety concerns, U.S. Government regulations for 1966 required seat belts front and rear to be fitted to all new cars sold domestically. The Galaxie 500 would be the #3-selling convertible in the U.S. in 1966, with 27,454 sold; it was beaten by the Mustang (at 72,119, by more than 2:1) and by the Impala at 38,000. A parking brake light on the dashboard and an AM/FM radio was optional.

In 1967, the 7 Litre model no longer carried the Galaxie name; it was to be the last year of it being separately identified. That identification was mainly trim such as horn ring and dashboard markings as well as the "Q" in the Vehicle Identification Number. The 7 Litre in 1967 was basically a trim and performance option on the XL model, which was now a separate model as well. Little else changed, except for trim and the styling; the same engines were avaialable, from the 240 cu. inch six-cylinder to the 428 cu. inch V8. Modifications to the styling included adding a major bend in the center of the grille and making the model less "boxy" than the 1966 model. The 1967 LTD dropped the Galaxie name, a harbinger of changes to come. An 8-track tape cartridge player became an option. Back-up lights were standard.

In 1967 all Fords, including the Galaxie, featured a large, padded hub in the center of the plastic steering wheel, along with an energy-absorbing steering column, padded interior surfaces, recessed controls on the instrument panel, and front outboard shoulder belt anchors. Another safety related change was the introduction of the dual brake master cylinder used on all subsequent Galaxies (and other Ford models).

The 1968 model had a new grille with headlights arranged horizontally, although the body was essentially the same car from the windshield back. The 'long hood, short deck' style was followed too, as was the new trend for concealed headlights on the XL and LTD. One other change for 1968 was that the base V8 engine increased from 289 to 302 cu in (4.9 L). Standard equipment included courtesy lights, a cigarette lighter, a suspended gas pedal, and padded front seat backs.

The 1968 models featured additional safety features, including side marker lights and shoulder belts on cars built after December 1, 1967. The 1967 model's large steering wheel hub was replaced by a soft "bar" spoke that ran though the diameter of the wheel (and like the 1967 style, was used throughout the Ford Motor Company line). A plastic horn ring was also featured. 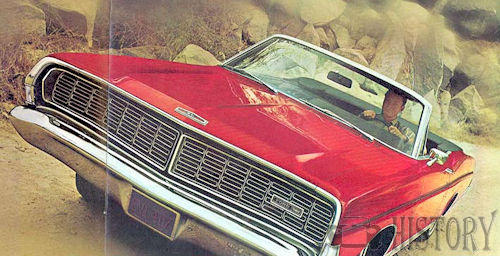