The 1960 Galaxie was all-new in style, abandoning the ostentatious ornamentation of the 1950s for a futuristic, sleek look. A new body style this year was the Starliner, featuring a huge, curving rear observation window on a pillarless, hardtop bodyshell. The formal roofed 2-door hardtop was not available this year, but the roofline was used for the Galaxie 2-door pillared sedan, complete with chromed window frames. It had been the most popular body style in the line in 1959, and sales dropped off sharply. Contrary to Ford's tradition of pie-plate round taillghts, the 1960 featured "half-moon" lenses turned downward. The "A" pillar now swept forward instead of backward, making entering and exiting the car more convenient. The appearance seems to be influenced by the flowing lines of the 1955 Crown Victoria while eliminating the "basket handle", also called the "B" pillar.

For 1961, the bodywork was redone again, although the underpinnings were the same as in 1960. This time, the tailfins were almost gone; the small blade-like fins capped smaller versions of 1959's "pie-plate" round taillamps once again. Performance was beginning to be a selling point, and the 1961 Galaxie offered a new 390 CID (6.4 L) version of Ford's FE series pushrod V8, which was available with either a four-barrel carburetor or, for serious performance, three two-barrel carburetors. The latter was rated at 401 hp (298 kW), making even such a heavy car quite fast indeed. The 352 was downgraded in favor of the 390; it was equipped with a 2-barrel carburetor and single exhaust. The Starliner was again offered this year, and Ford promoted this model with lots of luxury and power equipment, but it was dropped at the end of the year, as the re-introduced square-roof hardtop coupe took the bulk of sales.

For 1962, the Galaxie name was applied to all of Ford's full size models, as the Fairlane moved to a new intermediate and Custom was temporarily retired. New top-line Galaxie 500 (two-door sedan and hardtop, four-door sedan and hardtop, and "Sunliner" convertible). In an effort to stimulate midseason sales, Ford introduced a group of sporty cars along with its now-famous "Lively Ones" campaign. These models featured the bucket seats and console that was popularized by the Chevrolet Corvair Monza, and included a Fairlane 500 Sports Coupe, and a Falcon Futura. The full-size line got a new bucket-seats-and-console "Lively One," the Galaxie 500/XL (two-door hardtop and convertible). The 292 cu in (4.8 l) V8 was standard on the 500/XL. The XL had as sportier trim inside and out as part of the package. This model was Ford's response to Chevrolet's Super Sport option for the big Impala, which was introduced the previous year and saw a significant rise in sales for 1962. Performance was not ignored either, with an even larger 406 cu in (7 l) engine being available, again in single four-barrel or triple-carbureted "six-barrel" form. At the other end of the spectrum, of course, the 223 cu in (3.7 l) "Mileage Maker" 6-cylinder engine was still available for the more budget-minded driver. Tailfins were gone, giving the 1962 models a more rounded, softer rear end look. Taillights were set lower into the rear panel and were partially sunken into the newly sculpted rear bumper.

The 1962 models, however, were overweight by comparison to the Super Duty Pontiacs with their aluminum body panels and larger-displacement engines, so late in the production run, Ford's Experimental Car Garage was ordered to put the Galaxie on a diet. It produced 11 "lightweight Galaxies", making use of fiberglass panels, as well as aluminum bumpers, fender aprons, and brackets; the result was a Galaxie weighing in at under 3,400 lb (1,542 kg). The base 2-door Club Sedan was 3,499 lb (1,587 kg) It was an improvement.

For 1963, Ford saw no reason to radically change a good thing, and the 1963 model was essentially unchanged save for some freshening and added trim; windshields were reshaped and a four-door hardtop 500/XL was added. A lower, fastback roofline was added mid-year to improve looks and make the big cars more competitive on the NASCAR tracks with the added downforce. This 1963½ model, the industry's first official "½ year" model, was called the "Sports Hardtop" or "Fastback" (it shared this feature with the in 1963½ Falcon). Galaxie buyers showed their preference as the new Sports Hardtop models handily outsold the "boxtop" square-roof models. The Sports Hardtop was available in both Galaxie 500, and Galaxie 500/XL trim. As to be expected, sister Mercury also received the new roofline in Monterey, Montclair, and Park Lane models. A base-model Galaxie was offered for 1963 only, badged as the Ford 300. The "Swing-away" steering wheel became optional.

Midway through the 1963 model year, Ford replaced the outdated 292 Y-Block V8 with the new small block 260 and 289 V8s that were originally developed for the Fairlane. They were also offered on the Falcon Sprint and Mustang. Ford continued to offer the FE series 352, and 3 versions of the 390 V8 (Regular, High performance, and Police). Five different transmissions were offered in 1963. A 3-speed manual column shift was standard on all models except the 406 V8, which required the heavier duty Borg-Warner 4-speed manual. A three speed manual with overdrive was optional, but rarely ordered. The two speed Ford-O-Matic was common with the 6 cylinder and small block V-8s, while the majority of big blocks (352 and 390) were ordered with the 3-speed Cruise-O-Matic automatic transmission. The availability of several different rear end ratios, along with 5 transmissions, and 8 different engines, led to a huge number of different driveline combinations for 1963. The most produced combination for the Galaxie and Galaxie 500 was the 352 V8, with Cruise-O-Matic, and the highway friendly 3.0 rear end ratio.

For the performance oriented things were a little different. Partway through this year and in limited quantities there became available Ford's new racing "secret weapon", the 427, replacing the 406. It was intended to meet NHRA and NASCAR 7-liter maximum engine size rules.This engine was rated at a conservative 425 hp (317 kW) with 2 x 4 barrel Holley carburetors and a solid lifter camshaft. Ford also made available aluminum cylinder heads as a dealer option. The 1963½ was still overweight, however. To be competitive in drag racing Ford produced 212 (around 170 from Ford Norfolk, about 20 from Ford Los Angeles)[ lightweight versions of the "R" code 427, in the Galaxie 500 Sport Special Tudor Fastback. Available only in Corinthian White with red vinyl interior,and with a list price of about US$4,200 (when a base Ford 300 went for US$2,324, and XL Fastback was US$3,268), these cars came stock with Borg-Warner T-10 four-speed, 4.11:1 rear axle, heavy-duty suspension and brakes, and were fitted with a fiberglass hood (a flat piece at first, late in '63 the popular blister hood also used on the Thunderbolt), trunk, front fenders, and fender aprons,as well as aluminum bumpers and mounting brackets, transmission cases, and bellhousing. Hood springs, heater, trunk lining and mat, spare wheel and tire (and mounting bracket), trunk lid torsion bar, jack, lug wrench, one horn (of the stock two), armrests, rear ashtrays, courtesy lights, and dome light were removed to reduce weight. The first 20 cars had functional fiberglass doors, which shaved 25 lb (11 kg); these were deleted because of Ford's concern for safety if used on the highway. The cars had all sound deadening removed, lightweight seats and floormats, and no options. Contrary to myth, they were not factory equipped with cold-air induction, as the Thunderbolt would be. In addition, they were built on the 45 lb (20 kg)-lighter Ford 300 chassis, originally intended for a smaller-displacement V8. In all, the 427s were 375 lb (170 kg) lighter than before (425 lb (193 kg) with the fiberglass doors).

The first two lightweight Galaxies, using 289 cu in (5 l) bodies, were assembled at Wayne, Michigan, late in January 1963, to be tested at the 1963 Winternats. They were delivered to Tasca Ford (East Providence, Rhode Island) and Bob Ford (Dearborn, Michigan). Bill Lawton's Tasca Galaxie turned the best performance, with a 12.50 pass at 116.60 mph (187.65 km/h).It was not enough against the 1963 Chevrolet Impala Z-11s in Limited Production/Stock, however. Three more were assembled from parts and tested at Ford's Experimental Car Garage in Dearborn. One of the next two, the last Winternationals test cars, was prepared by Bill Stroppe in Long Beach, California, for Les Ritchey; it was featured in the July 1963 issue of Hot Rod. For all their efforts, Ford discovered the Galaxies were still too heavy, and the project was abandoned. Some of these cars competed in England, Australia and South Africa after being modified by Holman and Moody who fitted them with disc brakes and other circuit racing components. Jack Sears won the British Touring Championship in 1963 and the racing Galaxies were also driven by Sir Jack Brabham, Graham Hill and other notable drivers of the period. The heavy Galaxies suffered from persistent brake failure that led to a number of crashes, and in late 1963 started using the 12-inch disc brakes from the Ford GT40 program. By this time the Lotus Cortinas were being developed and the big Galaxie became uncompetitive. Some of these race cars survive in England and in Australia where they compete in Historic Touring Car racing. A new 260 cu in (4.3 l) V8, derived from the 1962 Fairlane engine, replaced the Y-block 292 cu in (4.8 l) as the entry level V8. Later in the year, the 260 was replaced with an enlarged version displacing 289 cubic inches.

Model year 1964 was the fourth and final year of this body style. Interior trim was much altered, and the exterior featured a more sculpted look which was actually designed to make the car more aerodynamic for NASCAR. The formal-roof "boxtop" style was replaced by a slanted-roof design for all non-wagon or convertible models, including sedans. Ford's quality control, spotty when the first Galaxie was introduced, was now as good as it ever was, and many 1964 Fords passed the 100,000-mile (160,000 km) mark intact. The 1964 models gained an enviable reputation as durable, comfortable cars that offered decent handling and road-ability at a reasonable price, so it is no wonder they sold so well. Of the XL models, the 1964 hardtop coupe takes the prize for the most produced. The base 300 was replaced by a line of Custom and Custom 500 models. The 289 continued as the base V8 and was standard in the XL series. XL models got new thin-shell bucket seats with chrome trim. They were designed to cradle the driver better than the previous style, and Federal regulations now required lap-style safety belts for both front outboard occupants.

Under the hood, the 427 cu in (7.0 l) engine carried on the high performance duties. Ford again took the 427-equipped Galaxie to the racetracks in serious fashion in 1964, building 50 lightweight fiberglass-equipped cars just for the purpose of drag racing. These competed with success in North America but were still too heavy and Ford introduced the lightweight Fairlane Thunderbolt which used the 427 engine and was immediately competitive.

Late in the year Ford introduced their new engine challenger, the SOHC 427 "Cammer". Though not documented, it is believed a few may have found their way onto the street. This engine was only available to racers through the dealer network or from the manufacturer; none were ever factory installed. Rated at over 600 hp (450 kW), this is possibly the most powerful engine ever fitted to a production car by an American manufacturer. NASCAR changed the rules, however, requiring thousands—rather than hundreds—of production examples in service to qualify for the next season and Ford decided against producing the Cammer in that quantity. Fears of liability concerns and the bad publicity possibilities in giving the public a car that dangerously powerful are often cited as reasons, but it might simply have been that Ford doubted that an engine so unsuited to street use could sell in such numbers.

It should be noted that the Ford Country Squire station wagon, while wearing "Country Squire" badging for many years, was actually part of the Galaxie 500 line. Some Country Squires had "Galaxie 500" badging on the glovebox indicating the series name. These wagons featured the same tinware as Galaxie 500s inside and out, and were a step up from the base-model Country Sedan. 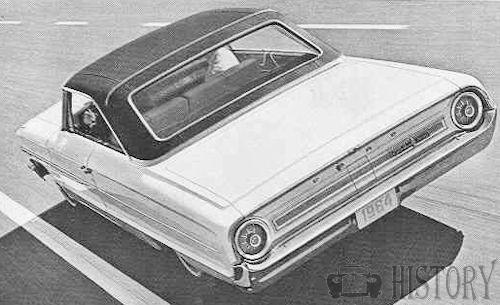 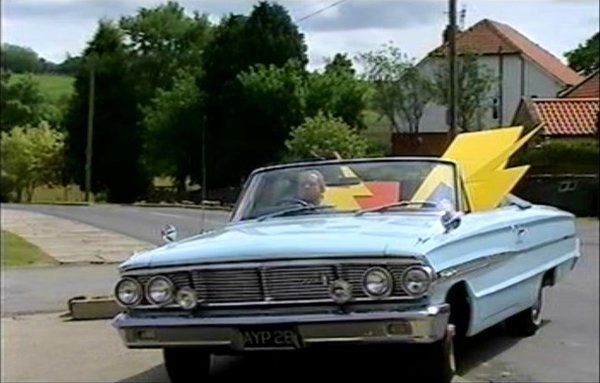