1959 saw the introduction of the Galaxie name in Ford's model lineup at mid-year. That year, the Galaxie range of six models were simply upscale versions of Ford's long-running Ford Fairlane with a revised rear roofline that mimicked the concurrent Thunderbird. In keeping with the era, the 1959 Galaxie was a chrome and stainless steel-bedecked, two-tone colored vehicle. It was the very image of late-1950s American automobile excess, though somewhat tamer than its Chevrolet and Plymouth competitors. Ford advertised "safety anchorage" for the front seats. The parking brake was now a pedal. Seat belts, a padded dashboard, and child-proof rear door locks were optional, while a deep-dished steering wheel and double-door locks were standard.

Among the models was the Skyliner, featuring a retractable hardtop that folded down into the trunk space; this feature, impressive but complicated, expensive and leaving very little trunk room when folded down, did not last long, being produced from 1957 through 1959. Power retractable hardtops have since been used by luxury manufacturers such as Mercedes-Benz, Lexus, and Cadillac, but in all these cases the vehicle was a two-seater, allowing a much smaller top mechanism than the Skyliner's. Not until 2006, when the Pontiac G6 convertible, Peugeot 206 CC (in Europe) and Volkswagen Eos appeared, did another mass-market model with a rear seat appear in this category. 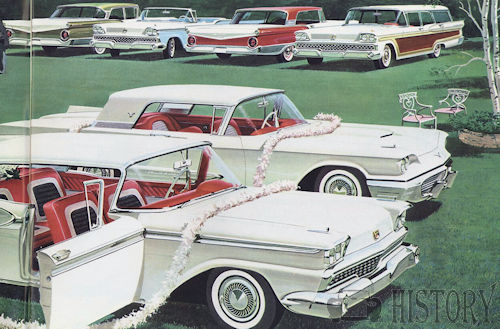