The Ford Fiesta Seventh generation of the Fiesta . The vehicle was officially presented on November 29, 2016 at a Go Further event at the Cologne-Niehl plant . Production started on May 16, 2017.Stars in the Euro NCAP - Crash Test (2017) 5 stars

At around 4.04 meters, the new model is seven centimeters longer than its predecessor, and it is also 1.2 cm wider. The external appearance has changed little compared to the previous model: the front of the vehicle, headlights, bonnet, side line and the roof appear the same at first glance, the most striking change are the rear lights, which are no longer placed next to the rear window, but clearly below it. The safety of the Fiesta has been further developed: seat belt tensioners and belt force limiters at the rear are standard; Furthermore, the bonnet and windshield wipers give way in the event of a collision with a pedestrian, the headlights are pressed into the body in the event of an impact. 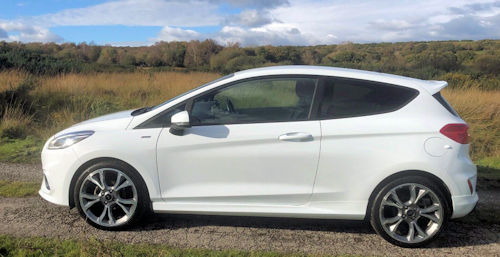 Only three-cylinder petrol engines are available for the model launch; the Fiesta ST is also getting a new 1.5-liter three-cylinder EcoBoost with cylinder deactivation . It was presented at the Geneva Motor Show in March 2017 and developed 147 kW (200 PS). With it, the car accelerates to 100 km / h in 6.5 seconds. The diesel engines will continue to be produced with four cylinders. All Fiesta have an automatic start-stop system .

Depending on the equipment, an up to eight-inch touchscreen monitor is installed, which is equipped with the latest SYNC3 infotainment generation . Fifteen different assistance systems are available for the model, some of which also depend on the equipment, including an emergency braking assistant that now also brakes for pedestrians at night, a parking assistant, a high beam assistant and adaptive cruise control . 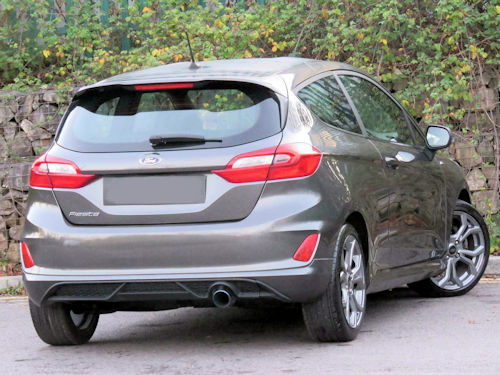