While the Fiesta were marketed previously as the XR2 the mark 3 was now designated  as the XR2I. As they were for the sportier models of the Escort XR3I and XR4I  for the Sierra .

From the introduction of the third series in 1989 all XR2 had the suffix "i" , suggesting that these vehicles were now equipped with an injection system instead of the usual carburettor . The XR2i was already available with the introduction of the new model series, the CVH engine of its predecessor with 1.6-liter displacement now provided with regulated catalyst and a modern EFI electronic injection system 76 kW (103 hp). In some countries, the vehicle was sold without a catalytic converter, the engine then made 81 kW (110 hp). The plastic spacers were now painted in body color and in the front bumpers four rectangular auxiliary lights were integrated. As with the predecessors, the vehicle had a standard sports equipment such as lowered body, wide tires, sports seats, sports steering wheel and a tachometer.

After the last XR2i 16V was produced in 1994, the XR disappeared from the type designation and badges as Si. other models the RS1800 and RS Turbo

Ford used the abbreviation XR until about 2010 on other models. Later sporty models, which were commonly called ST or RS in Europe. 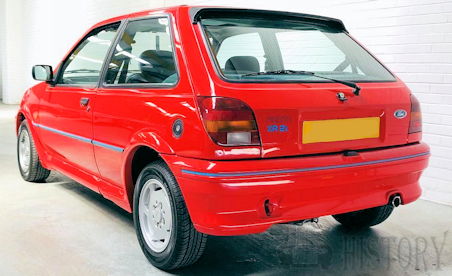