At the same time as the introduction of the new Escort for 1991, the successor (Orion) was also introduced in July 1990 . Also this time the Orion lacked the third side window, however, the tail design was now completely adapted to the escort. Original identification should be the front, white indicator lenses, but in the same year the escort received. In some countries (such as the United Kingdom), the Orion had a black plastic bezel in the area between the taillights.

Unusual for a notchback sedan was that the Orion was now also available with rear wiper .

In the September 1992 facelift Orion got again an independent grille (chrome). The new rear design of the simultaneously revised Escort '93 was not adopted at Orion.The Orion in other European countries, especially in the UK , has been sold quite successfully.The Orion with the diesel engine was characterized by an enormous thrift and toughness, it was not uncommon that vehicles have reached the 450,000-kilometer limit with one engine.

The car was led to December 1993 as Orion. From January 1994 to August 1998, the vehicle was sold as an escort notchback. The rear was identical to that of the Orion, the rest of the vehicle, however, corresponded to the Escort '95. Only in Argentina  was it still sold under the model name Orion.As a successor in early 1999 notchback variant of the Ford Focus . 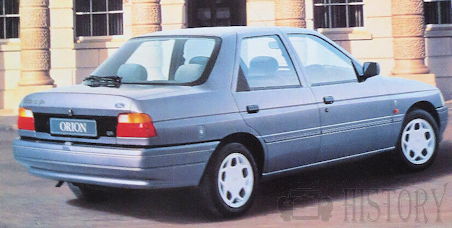