Since the spring of 2002, Ford has been offering a city delivery van ( high-roof combination ) under the names Ford Transit Connect (box van) and Ford Tourneo Connect (minibus / station wagon) . The first Transit Connect is based on the C170 platform, which the Ford Focus '98 also used.

The first generation of the Transit / Tourneo Connect was designed by designer Peter Horbury and first presented in autumn 2001. The model replaced the Ford Courier delivery van based on the Ford Fiesta '96 and the Ford Escort delivery van, both of which were discontinued in the same year.

The model was available in two versions, short wheelbase with flat roof and long wheelbase with high roof. In the long version it offers such. For example, the Fiat Doblò Cargo Maxi or the Renault Kangoo Rapid can accommodate two Euro pallets . The Connect has been with the 2.0L four-cylinder gasoline engine with 85 kW (115 hp) also available as an LPG bi-fuel conversion.  and the 1.8 liter common rail diesel engine is with 5-speed manual transmission and two performance variants 55 kW (75 hp) and 66 kW (90 hp) offered. There are various storage compartments inside as well as a holder for A4 documents and cups

From the beginning of 2002 it was built at Ford Otosan in Turkey and since mid-2009 also in the Ford plant Craiova in Romania . 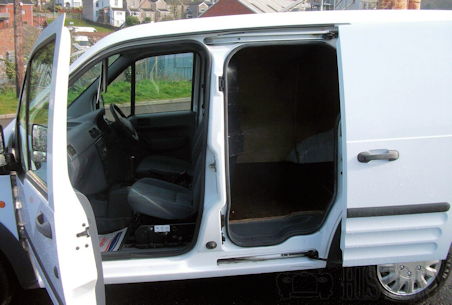 The Tourneo Connect was the only one in its class to offer a retractable, 60-40 split and fully demountable rear seat. This allows different seating and loading variants. The two side sliding doors are optional, customers could choose between the tailgate and rear wing doors.The Transit Connect was voted Van of the Year in 2004.

In October 2006, the Transit Connect was slightly revised for the first time.

In North America, the Connect was offered only as a long version of the delivery van with the 2.0L four-cylinder gasoline engine with 4- speed automatic transmission . In Europe, there was the 1.8L common-rail injection diesel engine with 5-speed manual transmission and two power versions 55 kW and 66 kW. Starting in 2011, the Transit Connect XLT Premium Wagon with five seats, revolving rear windows, reversing camera, alloy wheels, fog lights and body color painted grille was offered in North America.

The Transit Connect Wagon is thus the first Ford minivan on the local market since the Ford Freestar was discontinued in early 2007. To circumvent the 25% duty on imported light commercial vehicles, Ford imported the Tourneo Connect as "passenger transport vehicles". The vehicles shipped from Turkey will be converted at Baltimore Harbor by WWL Vehicle Services Americas Inc., the rear side windows replaced with metal plates and the rear seats removed. The conversion was significantly cheaper than the otherwise incurred import tax of a few thousand US dollars. Also, there was only the long version in North America with a high roof, which does not fit into most multi-storey American car parks.At the Geneva Motor Show 2009 Ford presented a prototype of the Ford Transit Connect with electric drive.(North America)

The bodies are delivered to the English company Smith Electric Vehicles , which builds two electric cars out of it :On the one hand the Smith Ampere , a Tourneo Connect with up to 800 kg payload, a 21 kWh lithium iron phosphate battery and a 50 kW permanent electric motor. This ideally achieves a range of 160 km and a top speed of 110 km / h.The Smith Edison , a 3.5-ton Transit Connect with a payload of 1338 kg and up to 80 km / h maximum speed and a maximum of 240 km range.

The Ford Transit Connect X-press was a prototype of the Transit Connect with the engine of the Ford Focus RS with five-speed manual transmission, which was not built in series. 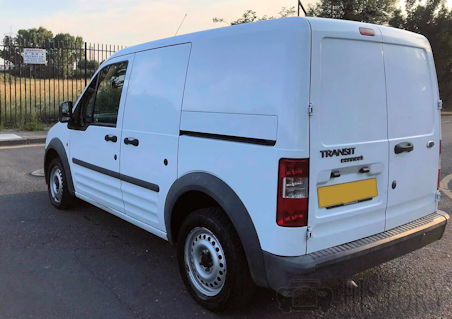