The RS1700T  is a race Group B prototype car from Ford europe.To replace the world championship winning Mk2 escort in 1980. Modeled after the Escort of the third series (MK3) and intended as a rally vehicle for the new Group B. As a vehicle with rear-wheel drive in motorsport were attributed significantly greater chances of victory, the escort MK 3 the first front wheel drive Escort was used only taken over the body parts and rebuilt the vehicle to rear-wheel drive using chassis suspension and running gear from the mk2 escort,sierra and other sources.

The BDT type engine was installed longitudinally and the transmission together with the differential on the rear axle. ( Transaxle ) The engine is a turbo-charged version of from Cosworth developed BDA motor ( B elt D riven A-series) with a displacement of 1.7 liters. As with its predecessor, the Escort RS1800, some plastic parts such as spoilers and flared wheel arche extensions have been added.

However, the appearance of the Audi quattro at various rally events meant a sudden end to the project. Ford saw as did other manufacturers, that very quickly that in the long run in rallying can only be competitive with a four-wheel drive vehicle. The few around 18 prototypes as test cars, exhibits and technology vehicles built prototypes were disassembled and some parts reused for the new RS200 A homolgated 200 road cars that needed to be built the rally version did not arrive. There, again a BDT engine was used. The bodies of the vehicles were sold by the motorsport department, from time to time images of unfinished vehicles appear and are offered for sale. However,there are three or four cars were apparently not disassembled, these occasionally appeared at national rally events as privately used vehicles. 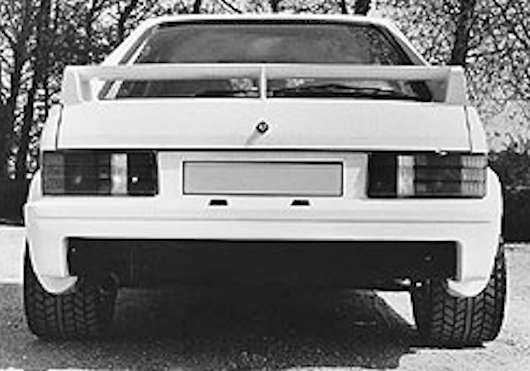