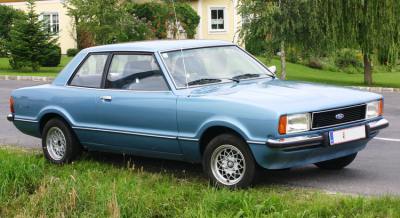 Production began of the Taunus series "GBTS", also known as the "Ford Taunus TC2". in 1976

Ford of Britain continued to sell the Cortina Mark III, the Dagenham produced version of the earlier Taunus TC, for more than half a year following the launch of the Taunus TC2, but in September 1976 the Cortina Mark IV was introduced in Britain, after which the Taunus TC2 and Cortina Mk IV were almost identical, apart from regional variations in terms of specification changes and trim levels. Internally, they were for the most part differentiated by the driving position: LHD (left-hand drive) cars were badged Taunus while RHD (right-hand drive) cars were badged Cortina, generally regardless of the country of assembly. However, where the German "Ford Taunus" name had no significant positive presence the "Ford Cortina" name was used in certain smaller LHD markets such as Greece, South Korea, Philippines, Israel (which took most of its LHD cars as Cortinas, sourced from the UK plant, till 1981) and Taiwan.

The Taunus TC2 was essentially a "reskin" of the Taunus TC, and was in most markets presented as such. For Ford's Cortina buyers the reskin was a little more extensive, with the loss of the "coke-bottle" line which distinguished the Cortina Mk III from the 1976 Mk IV model, and promotional material in respect of the Cortina played up the differences between the Cortinas Mark III and IV.

The Taunus TC2 retained an overall silhouette very similar to that of the Taunus TC, though actually all the principal outer body panels were newly shaped as were the rear window and side windows. Parking became a little easier now that the rear corners of the car were visible from the driver's seat. From outside the car the most obvious change was the loss at the front of the "Knudsen Nose" which made for a less eye-catchingly individualistic look, but resulted in a more harmonious body shape.

The suspension set-up was unchanged from that on the Taunus TC (as improved in September 1973). The twin circuit hydraulic braking system still operated on disc brakes at the front and drum brakes at the rear, their diameters unchanged. However, where in 1970 a buyer of the entry level 1294cc would have found a brake servo on the options list, servo-assisted brakes for the Taunus TC2 were standard across the range. On the six cylinder cars, which had the heavier engine blocks, it also became possible from August 1977 to specify as an option power assisted steering.

The range of engine sizes was the same apart from one important addition: buyers could specify an enlarged 1993 cc version of the 4-cyl. OHC engine. It was therefore now possible to buy a 2-litre Taunus with either 4 or 6 cylinders. The four cylinder powered car came with an advertised maximum output of 98 PS (72 kW; 97 hp) while the six cylinder version offered only 90 PS (66 kW; 89 hp). The more recently designed four cylinder unit also came with more torque. Nevertheless, the six cylinder car achieved its maxima at lower engine speeds and some commentators found it more relaxing to drive.

As before, all but the 1294cc engined car could be ordered, at extra cost, with a three-speed automatic transmission. The automatic box offered was no longer a Borg Warner system, but Ford's own C3 transmission produced at the manufacturer's transmission plant in Bordeaux which had opened in 1973.

Since 1970 the Taunus TC had competed head-on for market-share with the Opel Ascona, and in 1973 the two were joined in what was now a three-way tussle by the Volkswagen Passat. Strictly comparable production data for the three cars are not easily accessible, but if one leaves out Fords assembled in England and badged as Ford Cortinas, and also excludes Opel Asconas badged as Vauxhall Cavaliers, then in volume terms the three-way tussle was narrowly won between 1976 and 1982 by the Ford Taunus TC2/TC3, with 1,583,699 cars produced.  Between 1975 and 1981 Opel produced 1,316,459 Ascona Bs. During the six years between 1976 and 1982 Volkswagen produced 1,360,312 Passats.  Despite its strong performance in the market place, by 1980, with new contenders from Volkswagen and Opel arriving, the output data suggest that the age of the Taunus TC's basic design was beginning to count against it.

In a sector which gained in significance during the increasingly cash-strapped 1970s, as many buyers traded down from larger cars such as the Opel Rekord, the Taunus TC2/TC3 (like the TC before it) achieved market place success through a combination of good looks and aggressive pricing. The mechanically conservative car was widely regarded as dependable, despite never entirely ridding itself of irritating defects and weaknesses which a more rigorous development process should have prevented.

When, in 1979, the Taunus TC3 (also known as the Taunus series "GBFS") replaced the Taunus TC2 the major components remained basically the same. In the UK Ford presented the facelifted car as the "Cortina Model 80", although it quickly became known, if only informally, as the Cortina Mk 5. Again, the 1979 differences tended to be played up more in respect of the Cortina badged car assembled in Dagenham than in respect of Ford Germany's Belgian assembled Taunus badged cars.

Innovations in the engine compartment with the 1979 TC3 model included a new "Economy carburetor", manufactured in-house by Ford, which gave rise to many complaints. Minor bodywork modifications affected the base of the side windows which was very slightly lowered. Other changes visible from the outside included bumpers that now wrapped round along the sides of the car as far as the wheel arches. The front and rear light clusters were reshaped and also wrapped around the corners of the car sufficiently to be visible from the sides.

At the top of the range the choice of 2274cc engined cars was reduced with the delisting of the Ford Taunus Sport, but across the range it now became possible to specify a "S" options package which in essence comprised a stronger anti-roll bar and firmer suspension.

The end of European production

In July 1982 European production of the Taunus TC3/Cortina 80 ceased; it was replaced in October by the Ford Sierra. The Sierra carried over the Cortina/Taunus OHC Pinto engines and "conventional" rear-wheel drive configuration but was otherwise an all new car with independent suspension all round.

Taunus production continued in Argentina until 1984. Here the fastback coupé version,discontinued from the European model line-up in 1975, remained in the Taunus range right until the end.

Taunus production also continued at Otosan in Turkey, where a version of the TC3 with remoulded ends continued in production until 1994.

A black 1976 model Taunus was driven by henchman chasing James Bond (Roger Moore) - in his Lotus Esprit - in the 1977 film The Spy Who Loved Me on the roads of Sardinia. A notable passenger of the Taunus was the iconic Jaws (Richard Kiel), who was presumably the only survivor when Bond managed to shake off the pursuing car and cause it to overshoot a cliff and plough into the roof of a barn. A blue 1948 model Taunus was driven by Steve Forrest in the very first episode of the 1965 TV series The Baron. A 1979 Ford Taunus is a main feature of the Swedish classic television show Ronny&Ragge.

1977 film The Spy Who Loved Me Ford Taunus