In September 1970 a new Taunus, the "Taunus Cortina" (TC), was introduced by Ford. Ford offered a two- or four-door sedan/saloon and a five-foor station wagon/estate (identified as with previous Taunus station wagons, as the Taunus Turnier).

Between 1970 and 1975, when the Taunus TC gave way to the Taunus TC2, a fashionable fast-back coupé was also included in the Ford Taunus range.

The Ford Taunus TC series was conceived in the late 1960s to be a "world car" alongside its technical sibling the Cortina Mk III, with development and design work taking place on both sides of the Atlantic. The car was developed under the supervision of Semon E. "Bunkie" Knudsen, till February 1968 a high profile General Motors executive and from early 1968 till Autumn/Fall 1969 Ford's Dearborn-based Chairman. The car is often nicknamed "Barock 2" (recalling the Taunus P2 series of the late 1950s, commonly known as the "Barock-Taunus") or "Knudsen-Taunus" in Germany, because of the prominent hood/bonnet scoop that, as the legend has it, was put there on direct order from Knudsen. Otherwise the major design work is rumoured to have been done by German car designer Luigi Colani, who later supplied design concepts for BMW's motorcycle division in the late 1970s.

The lower end of the market segment previously occupied in Germany by the Ford Taunus P6 being targeted, since 1968, by the smaller Escort, the Taunus TC was presented as a slightly upmarket replacement for the P6 which ceased production in August 1970. The 2,578 mm (101.5 in) wheelbase of the new car was 51 mm (2.0 in) longer than that of the P6 but the Taunus TC had shorter overhangs, so that overall it was slightly shorter. Nevertheless, it was noted that the TC appeared from the outside to be larger than it was, which many buyers appreciated. The interior was no longer free of a transmission tunnel, since with the Anglo-German design of the Taunus TC, Ford Germany abandoned, for the time being, front-wheel drive for this class of car, asserting that rear wheel drive was less expensive and simpler to produce and to maintain. (The obvious benchmark in the market place for the TC, the Opel Ascona, would also retain a "conventional" rear wheel drive configuration till 1981.)

Rather than specify optional extras from a long list of possibilities as might have happened a few years earlier, customers were now encouraged to select from a range of "equipment packages", identified by suffix letters. The standard Taunus was identified in sales material as the "Taunus N", while progressively more extensive or sporty packages of extras were identified in 1970 with the suffixes "L", "XL", "GXL" und "GT". (A similar approach with "options packages" was being introduced in Germany by Opel at this time.) 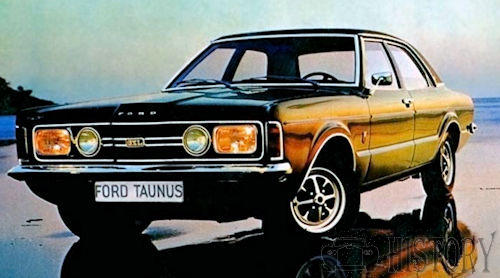 This model also formed the basis of the Cortina Mk.III, but with different door skins and rear wing pressings from the "coke-bottle" styling of the Cortina. In addition, there was never a Cortina III equivalent to the fast-back bodied Taunus TC coupé. The Taunus TC and Cortina Mk.III were both developed under the auspices of Ford of Europe, and most major components, including the entire floorpan, were identical.

Significant advances were made with the rear suspension. The previous large Taunus had featured a rigid rear axle, suspended using traditional leaf-springs, but with the TC Ford used a rear suspension configuration involving coil springs, with the axle located using two longitudinal and two lateral linkages. The front wheels, no longer driven, were suspended with a conventional wishbone suspension, which eschewed shock absorbers and gave the car a soft 'freeway' ride and, with the heavier 6 cylinder engines engines, a tendency to excessive understeer. Press criticism of the trade-off between the car's road-holding and ride-comfort soon evolved into a more general critique, not convincingly addressed by the manufacturer for several years, that Ford had launched the Taunus TC before they had finished developing it.

A telescopic steering column designed to collapse in the event of a frontal collision (rather than penetrate the driver's chest) had been mainstream in competitor models from Opel and Volkswagen for some time, and with the TC Ford now also incorporated this safety feature on their new mid-size range for Germany and mainland Europe.

Despite obvious US-management pressure to maximize commonality under the skin, the range of engines fitted on the Taunus TC differed from that on contemporary Cortinas in respect of the less powerful cars, and the UK company's venerable ohv Kent engine never found its way into the Belgian assembled Ford Germany version of the car. The rather lumpy V4 engine that had powered the Taunus P6 models in the 1960s (and which, in enlarged and more powerful form, would live on to power Ford Germany's Transit vans and full-size Granada model through much of the 1970s) was also passed over for the Taunus TC. The less powerful Taunus TCs were powered by a new four cylinder OHC engine that was shared with the newly introduced American Ford Pinto and was offered, at this stage, with 1294cc or 1593cc: a 1963cc version of the four cylinder engine would be added from 1976 in the Taunus TC2. In the meantime, signalling a move away from the strategy followed with the Taunus P6, customers willing to pay for more power could now specify one of the compact V6 units carried over from the top range P7 models, the six cylinder engines offering a choice between1999cc and 2294cc displacements.

All the Taunus engines except the 1294cc unit could be specified in combination with a Borg-Warner B35 three-speed automatic transmission in place of the standard four speed manual box.

The Taunus TC received its only significant face-lift in September 1973. Through the 1960s rival manufacturer Opel had set the pace in terms of frequent model changes and face-lifts, reflecting North American practice and the deep pockets of its General Motors parent. The mainstream German owned auto-makers that had survived till 1970 had not attempted to follow Opel down this path, but Ford had settled into a pattern of generally four-yearly model changes. From production statistics between 1970 and 1973 the Taunus TC was evidently a commercial success, but in 1974 sales were dipping alarmingly, as customers waited for a new Ford Taunus. A new Taunus was not yet ready for launch, but in September 1973 the existing model received a facelift with various changes in respect of trim package and engine combinations. The Taunus TC also received a new grill, now incorporating a second pair of front lights: rectangular headlights, reflecting contemporary styling trends, but hitherto restricted to the "XL" (and more exalted) trim packages, now became standard across the Taunus range. Ford Germany's Taunus output, which had slumped from 245,955 cars in 1973 to 138,357 in 1974, recovered to 181,530 in 1975.

On manual transmission 1593cc four cylinder engined cars September 1973 also saw small changes to the gear ratios for second and third gear. At this time lateral stabilizer bars were also fitted front and back which provided a belated answer to widespread criticism of the original car's propensity to wallow when changing direction or driving on irregular road surfaces.

The Ford Taunus TC was more visually striking that its predecessor and was welcomed on account of its good looks. Overall evaluation of the car's commercial success should perhaps combine data for both the Taunus TC and the Cortina Mk III which got off to a slow start thanks to a lengthy plant shut down resulting from a succession of strikes in 1970. Nevertheless, separating out figures for the Ford Taunus TC, produced under the auspices of Ford Germany at their Belgian plant, an hour down the road from their German head office, approximately 250,000 cars were produced during each of the three years 1971, 1972 and 1973, and in each of these years the Taunus TC was Ford Germany's top seller. Year by year output data for the rival Opel Ascona have not been located, but between 1970 and 1975 Opel produced 691,438 Ascona As, confirming that during its first three full years of production the Taunus TC was in the till now unusual position, for a Ford, of outselling its Opel rival.

World auto-sales were badly hit by the 1973 oil crisis. Ford Germany output in 1974 was down by slightly under 40% on the previous year. (Opel output was down by 33% over the same period.) Even in 1974 the Taunus was Ford Germany's top model, beating the smaller cheaper Escort if only by a small margin. In 1975 Taunus output recovered to 181,530, although by now the Taunus was no longer Ford Germany's top performer, with 215,760 Escorts produced by Ford German in 1975, the Escort having belatedly gained wider appeal with German buyers, following the launch in December 1974 of a less cramped Mk II version. 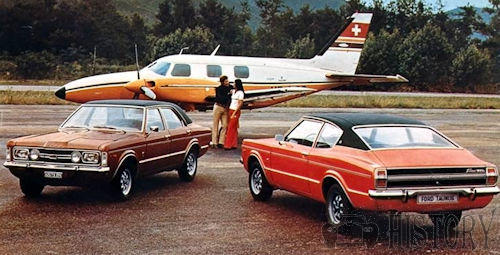