In 2008,the European Ka was replaced with a model developed and produced for Ford by Fiat S.p.A in conjunction with Fiat's own 500 vehicle The car is built in Fiat's Tychy, Poland, factory alongside the Fiat 500, Fiat Panda and Lancia Ypsilon.

Despite the wholly different architecture underneath, the new Ka maintains the curved styling features of the original, while bringing the look in line with Ford's Kinetic Design philosophy. It retains the wheel-at-each-corner stance of the previous model. Ford promises a cabin featuring 'expressive colours'. This mostly refers to the multichoice interior styling that is provided for the second time in Ford, right after the success of the Fiesta's interior design. In addition, the interior can be equipped with accessories such as a Bluetooth phone connection, wireless voice control, a USB port, a CD Radio, MP3, an AUX connector, steering wheel audio controls and a speaker system consisting of six speakers, a subwoofer and an amplifier.

The new Ka comes with a choice of two engines.

Both engines come with sub-120 g/km CO2 emissions (119 for the petrol and 112 for the diesel). Both engines are supplied from Fiat.

The main mechanical differentiator between the new Ka and its Fiat sibling is that the Ford has better shock absorption than the Fiat 500. Fitting a rear anti-roll bar enabled 30 percent softer springs and accordingly retuned dampers to improve ride performance over uneven road surfaces. Some of these improvements were subsequently adopted on Fiat 500 Abarth and Fiat 500C models. Changes were also made to the 500's steering geometry for the Ka, although as the new Ka uses an electrically assisted steering system, it lacks the communication of its predecessor's hydraulically assisted steering. However, the electric steering system does make the steering much lighter and more energy efficient than its predecessor.

The new Ka has an overall Euro NCAP safety rating of 4 stars, with standard driver and passenger single-stage front airbags, ABS, immobiliser, hazard warning lights and remote central locking (except Studio version in UK). In addition, there are front side airbags and curtain airbags and ESP (Electronic Stability Program) with HBA (Hydraulic Brake Assist) and HLA (Hill Launch Assist) that come at an extra cost.

The new Ka made its debut in the 22nd James Bond film Quantum of Solace and was unveiled in October 2008's Paris Motor Show.

In 2008, there was some speculation that the Ka might be introduced to the North American market. It has since been confirmed however that Ford consider the Ka too small for American tastes and will not be introducing the vehicle to this market. 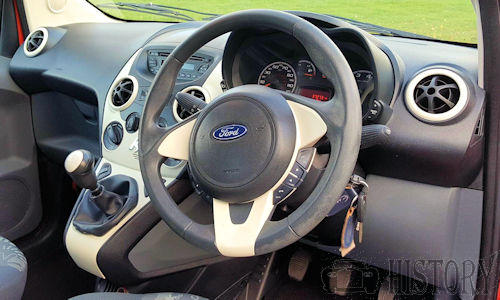 The basic equipment standard across all versions of the Ford Ka.

There are also three "Ford Individual packs" with special characteristics each (in both the interior and exterior design), called Tattoo, Grand Prix and Digital. Tattoo was replaced in 2011 by Metal. All Individual models are based on the Zetec.

In November 2013, Ford unveiled the Ka Concept in Brazil. Developed in-house by Ford Brazil, the new car is planned to enter production in 2014, with units arriving in South America and South Asia before Europe.

From its launch in 1997 until 2001 the Latin American Ka was substantially similar to the European Ka, differing only in levels of equipment and trim. The main differences from the European model were the very short gearing for the manual gearbox (the only transmission available) and the lack of soundproofing, which was gradually removed each year since 2000 as a way to cut down costs, following the practice of other Brazilian car makers at the time.

In 2001, the Latin American Ka received a facelift which left it slightly different, externally, to the European model; the most noticeable difference was at the rear, where the number plate was moved from the bumper to the boot lid, and the rear lights were made much taller.

Ford presented the new Brazilian Ka on 14 December 2007. Sales started on January 2, 2008 in Brazil, and the car was exported to other markets in Latin America. In comparison to the original Ka this car has a longer rear overhang and a redesigned rear seat to accommodate a fifth passenger. With a length of 3835 mmm, it now fits in the subcompact car class. In 2011 Ford presented a facelifted version following the Kinect concept car. In Brazil, only the Sport version offers a 1.6-litre engine.

In 2008, with the launch of the new European Ka, based on the Fiat platform, the two lines of the Ka had finally become completely separate. 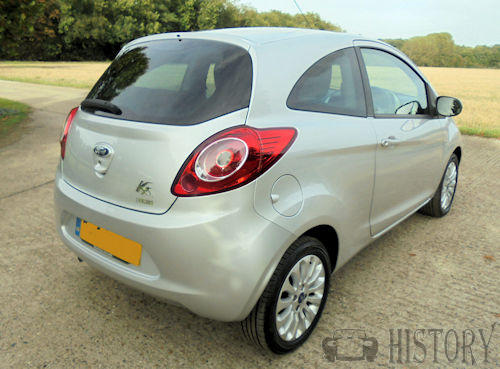 The Ford Ka was officially discontinued in Mexico in early January 2008 when it was announced that the new Brazilian Ka would not be offered in the Mexican market.