The second generation Scorpio was made available in saloon or estate styles only, and had largely the same floorpan as its predecessor as well as all of the same engines that were in use at the end of the first generation's run. Many suspension and handling improvements were made between the first and second generations (including self-levelling rear suspension on the estates). It was also radically re-styled both inside and outside, with new design of headlights, grille and door handles. Unlike the previous generation Scorpio models, there was no five-door hatchback body style in this line-up.

In addition, the "Granada" name, which had been retained in the UK and Ireland for the MkI Scorpio (AKA MkIII Granada) was finally dropped and the "Scorpio" name – already used elsewhere – was adopted.

Inside the car were new arm-chair style seats and improved interior quality, but outside the new look was controversial. The car sported bulbous headlights and its tail lights were arranged in a thin line just above the bumper. Unusually, Ford never released the name of the designer and maintain to this day that the car outsold its expected figures (although they never released what those figures actually were). The bulging headlights and wide grille were defended by some who felt that this made it look less like a minicab, but the public and press reaction to the design was largely negative.

Jeremy Clarkson wrote in The Times at the time that this car ended any argument as to which was the ugliest on the road. In Richard Porter's 2004 book Crap Cars the Scorpio Mark II was listed as number 49 (of 50) on looks alone. Quentin Willson said in a 1997 Top Gear episode that the "sad-eyed Scorpio is so heroically ugly, it was obviously designed by Ray Charles and Stevie Wonder.". On the DVD special Clarkson: Heaven and Hell, Clarkson set up a jousting contest between a Scorpio – which he described as "a wide-mouthed frog" – and a Triumph TR7, eventually destroying both cars via head-on collision.

In Germany, the satirical magazine Titanic noted the Scorpio's front's similarity to the facial features of politician Günter Verheugen, who would go on to become EU commissioner.

In early 1998 the Scorpio was facelifted, with darker headlight surrounds and a more subtle grille, to tone down the front end of the car. The rear lights were also revised to make the rear of the car less bulbous. This was to be the last development for the model, which finished production over the summer of 1998. Many Scorpios were still in stock at this point however, with at least two years elapsing between the end of production and the sale of the very last model because the facelift never saved it from being torn off the production and it just did.

Whether or not the car genuinely made Ford's sales expectations, the shifting European car market at the end of the 1990s meant that it was not directly replaced. This was not unusual at the time, with trends towards either high-spec large family cars for executives or towards multi-purpose vehicles for families. In any case, at that time the Ford company owned Jaguar, with which the Scorpio had competed in Europe.

The Dutch Royal Family used several Scorpios - some stretched ones, and all painted in Royal Blue. There is still a custom build Scorpio landaulet in the royal stables. After Ford ended the production, the Volvo S80 replaced the Ford models

The Scorpio Mark II was available in the following levels of trim (each one being available as a saloon or an estate and with any engine). Regardless of the trim level, any car with a 2.9 Cosworth engine was fitted with traction control, cruise control and an automatic gearbox as standard (a manual gearbox could not be specified at all). All other engines could be fitted with either a manual or automatic transmission although, in practice, the vast majority of Scorpios were automatic.

Unusually trim levels and engine sizes were not liveried on the backs of the cars. Rather the trim levels were liveried on the sides of the cars by the Scorpio badges on the rear window frames as such. The Executive had no badge, simply the word "Scorpio". Each other model had the model name under the badge, for example "Scorpio Ultima."

Engine sizes were also on the sides of the cars towards the front just above the auxiliary indicator lights as such: 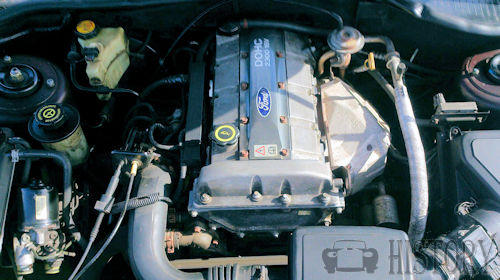 Unlike the Mark I Scorpio, the word "Cosworth" did not appear anywhere on the outside of cars fitted with such an engine (possibly in an attempt to reduce the likelihood of vehicle theft) although it is in evidence across the top of the engine. However, on the 1998 facelift, the Cosworth badge is clearly visible on the trunk lid.

With large numbers of these types of vehicles traditionally being sold into the company car market in the UK, their very low residual values (worth after 3 or 4 years use) affected the total cost of ownership to such a degree the premium, aspirational marques became no more expensive to run, especially on a Contract Hire or Leasing Agreement. Buyers therefore gravitated toward models with more prestige such as those made by BMW and Lexus. 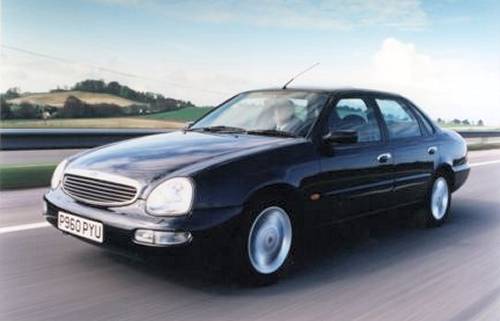