The sixth generation of the Transit was officially launched in January 2013 at the North American International Auto Show in Detroit. In the summer of 2014, it will be released in North America for the 2015 model year.

A globally designed vehicle, the new-generation Transit was again a collaboration between Ford of Europe and Ford in North America. With its external design headed by Ford of Europe, the new Transit evolved from the New Edge styling used from the previous-generation model to the Kinetic design adopted by many of the company's global models since 2010; the interior drew cues from the third generation Ford Focus. In North America, part of the development was undertaken by Ford designers based in Detroit. As the Transit is replacing the E-Series, Ford loaned examples of the previous-generation (V347/348) Transit to high-mileage drivers in the United States for evaluation purposes and durability testing. 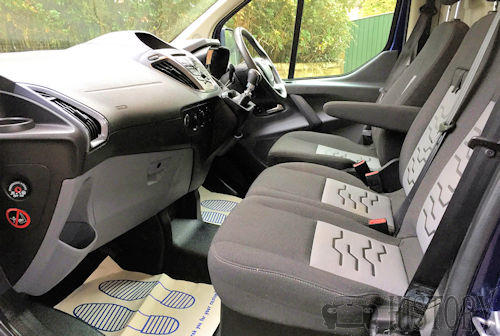 Worldwide production of Ford Transits takes place in two facilities; All European Transit production is from Ford Otosan in Kocaeli Province, Turkey; this factory which will also provide a percentage of global exports. North American production will be primarily sourced from Kansas City Assembly in Claycomo, Missouri on the lines used for the previous generation Ford Escape. While the front-wheel drive V347 Transit was sold alongside the E-Series in Mexico starting in 2007 (replacing the Freestar minivan), this generation of the Transit is the replacement for the E-Series and the first to be officially sold in the United States and Canada.

As before, the Transit and Tourneo are available in both front and rear-wheel drive configurations. In a break from the previous generation, front-wheel drive low-roof versions are now a distinct model. Branded as the Transit/Tourneo Custom, it is a mid-size van intended to compete with vehicles such as the Mercedes-Benz Vito/Viano and Volkswagen Transporter T5. It was unveiled at the 2012 Commercial Vehicle Show at the National Exhibition Centre in Birmingham, England. Currently, the Transit Custom will not be sold in North America.

The new Transit is available in cargo van, passenger van (wagon in North America), and chassis/cutaway cab configurations. In a significant departure from the E-Series, the Transit vans/wagons come in three different roof heights; extended-wheelbase vans are available with dual rear wheels.

Outside of North America, much of the engine lineup and drivetrain configurations is carryover from the previous generation. For North America, the Transit shares the 3.7L Ti-VCT and 3.5L EcoBoost V6 engines with the F-150. The 3.2L Duratorq inline-5 diesel makes its debut in North America rebranded as a Power Stroke diesel. All versions in North America are specified with a 6-speed automatic transmission and rear-wheel drivetrain. The 3.7L Ti-VCT V6 can be converted to run on compressed natural gas or liquefied petroleum gas with an optional Gaseous Engine Prep Package. 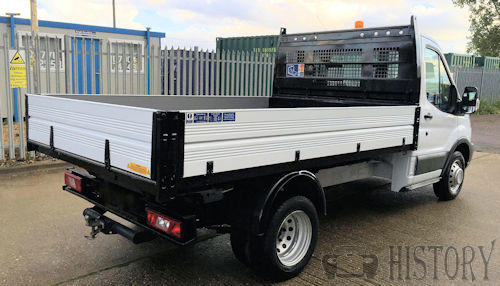 A Mark 6 Ford Transit was used in a Top Gear challenge to celebrate the Transit's 40th birthday, was titled "Lap the Nürburgring in less than 9 minutes and 59 seconds... in a van", and took place in Series 6, Episode 8, which was first broadcast on 10 July 2005. In the segment, Sabine Schmitz drove the Transit around the Nürburgring to see if she could beat presenter Jeremy Clarkson's time in a Jaguar S-Type Diesel of 9 minutes 59 seconds. However, her best time was 10 minutes 8 seconds despite reducing the weight of the van.
Ford (europe)