The Mark I Ford Consul and Zephyr models were first displayed at the Earls Court Motor Show in 1950. They were the first to use in mass production the MacPherson strut independent front suspension which is widely used today. Production began with the Consul on 1 January 1951. The Mark I model ran until 1956. From April 1956 the Mark II Consul, Zephyr and Zodiac went on sale and were known as the Three Graces.

The first of the Zephyr range was a lengthened version of the four-cylinder 1,508 cc (92 cu in) Consul, with a 2,262 cc (138 cu in) six-cylinder engine producing 68 bhp (51 kW). Like the Consul, the Zephyr came with a three speed gear box, controlled using a column mounted lever. The front suspension design, based on that first seen in the Ford Vedette, employed what would later come to be known as MacPherson struts while a more conventional configuration for the rear suspension used a live axle with half-elliptic springs. The car could reach just over 80 mph (130 km/h) and 23 mpg. 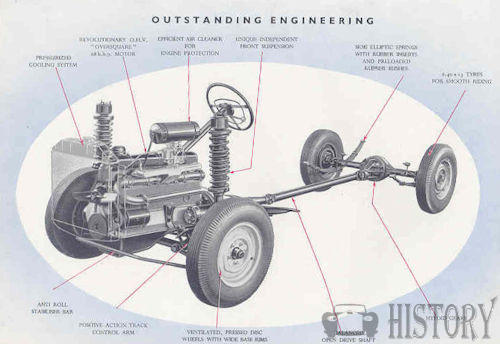 The Ford Zephyr Six was available with 4-door saloon, estate and two-door convertible bodies. The convertible version was made by Carbodies and had a power-operated hood; the estate car was by Abbotts of Farnham and was sold as the Farnham.

The Consul and Zephyr were assembled at Ford New Zealand's Seaview factory in Lower Hutt from CKD kits. The large Fords competed with the also locally built Vauxhall Wyvern and Velox and, later the Australian Holden. When the newly crowned Queen Elizabeth II visited New Zealand as part of a Commonwealth tour in the early 1950s, she was pictured watching Zephyrs being built at the local Ford plant.