This was a reworked 100E body with the new 997cc overhead valve engine, four-speed gearbox and 'banjo' style rear end from the Anglia 105E, produced to offer a four door model until replaced by the Ford Consul Classic. 38,154 were made, most of them in a two-tone colour scheme and deluxe trim.

Drum brakes of 8 in (200 mm) diameter were fitted, hydraulically operated, and the suspension was independent at the front using MacPherson struts. The rear driven axle used semi elliptic leaf springs. The steering mechanism used a worm and peg system.

In addition to the United Kingdom and Australia, Ford Prefects were also sold in the USA (Advert from 1958), New Zealand, where they were locally assembled, Argentina and Canada. The Canadian model was left-hand drive. The Prefect was also license built in Latvia by Ford-Vairogs as the Ford-Vairogs Junior. Also in South Africa, where they were presumably assembled locally. 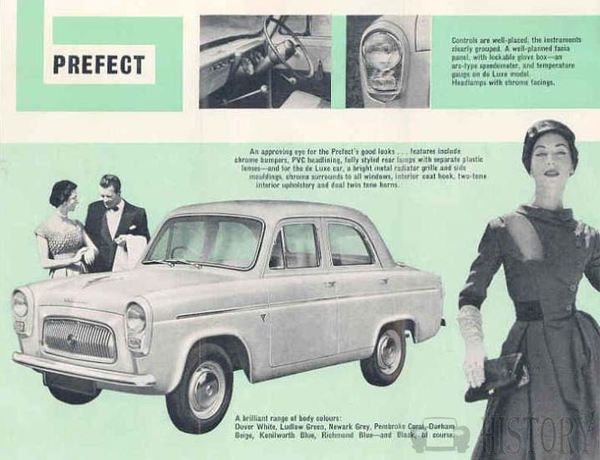