The Ford Consul Corsair, manufactured by Ford Motor Company in the United Kingdom, was a midsize car introduced at the London Motor Show in October 1963 and available as either a saloon or estate from 1964 until 1970. There was also a convertible version built by Crayford, which is now very rare and highly sought after as a classic. Two-door Corsair saloons are also rare, being built only to order in the UK, although volume two-door production continued for some export markets. Only one example of the fleet model, the Consul Corsair Standard, is known to exist.

The Corsair was one of the four model Consul range, and shared many of its mechanical components with the Cortina, Classic and Capri. The Corsair had unusual and quite bold styling for its day, with a sharp horizontal V-shaped crease at the very front of the car into which round headlights were inset. This gave the car an apparently aerodynamic shape. The jet-like styling extended to the rear where sharply pointed vertical light clusters hinted at fins. The overall styling was clearly inspired by the early 1960s Ford Thunderbird, though in transferring the look to a British family car, the overall effect is something of an acquired taste. This American styling cue had also been adapted by Ford, in Germany, for the (at the time controversially styled) 1960 Ford Taunus 17M.

The car was initially offered with the larger 60 bhp (45 kW), single carburettor, 1.5 L Kent engine that was also used in the smaller Ford Cortina, in standard and GT form. In 1964 twins Tony and Michael Brookes' team in a Kent engined (straight four) Corsair GT set 13 World Speed records at Monza in Italy averaging over 100 mph (160 km/h) for 15,000 miles (24,000 km) in the under 1500 cc class. The range was revised in 1965, adopting new Ford Essex V4 engines that many say spoiled rather than enhanced the car, as it had an out of balance couple, making it rough at idle and coarse on the road. This engine was available in 1663 cc form at first, but later in 1966, a larger 2.0 litre L version was offered alongside. One marketing tag line for the V4 models was "The Car That Is Seen But Not Heard", which was a real stretch of the ad man's puff, given the inherent characteristics of the engine. The other tag was "I've got a V in my bonnet". A 3.0 litre conversion using the Ford Essex V6 engine was available in Britain in conjunction with Jeff Uren's Race company and was known as the "Corsair Savage."

An estate car by Abbott was added to the range on the eve of the Geneva Motor Show in March 1966 and in 1967, the Corsair also underwent the Executive treatment like its smaller Cortina sibling, giving the 2000E model with dechromed flanks, which necessitated non styled-in door handles, special wheel trims, reversing lights, a vinyl roof and upgraded cabin fittings. The 2000E, priced at £1,008 in 1967, was positioned as a cut price alternative to the Rover 2000, the introduction of which had effectively defined a new market segment for four cylinder executive sedans in the UK three years earlier: the Corsair 2000E comfortably undercut the £1,357 Rover 2000 and, indeed, the less ambitiously priced Humber Sceptre then retailing at an advertised £1,047.

The Corsair's performance was good for a car of its type and period, with a top speed in its 2.0 L V4 version of 110 miles per hour (180 km/h) as measured by the speedometer,and exceptional acceleration at full throttle resulting from the progressive 28/36mm twin-choke Weber downdraught carburettor ("progressive" in the sense that second carburettor would start to open only once the first was fully open). A popular story circulated that if the car were driven at speeds over 80 miles per hour (130 km/h), its wedge-shaped nose would generate sufficient lift to make the vehicle dangerously unstable. However, this story was shown to be an urban myth when Corsair set World records at Monza (see above), running at 110 miles per hour (180 km/h) for hour upon hour without the slightest apparent effect. 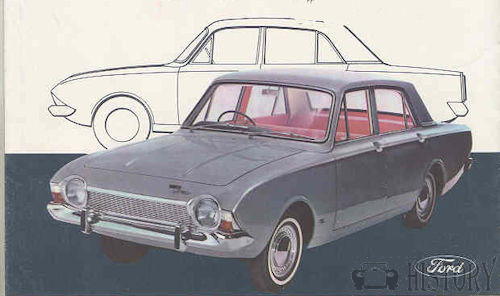 The Corsair was replaced by the Mk 3 Cortina in 1970, at which time the enlarged Cortina became Ford's midsized car, and a new smaller model, the Escort, had already filled in the size below. The new Ford Capri took on the performance and sporty aspirations of the company.

Over its six-year production, 310,000 Corsairs were built.

The early model used styling details from the 1961 and 1962 Ford Thunderbird. built at  Halewood, England from 1964 to 1969 the last built at  Dagenham, England from 1969 to 1970. There was also a Cabriolet version, which was manufactured by Crayford Engineering and is very rare today with a Essex V6 engine and 4 or 5 seater option . In some export markets, a 3-door station wagon was also offered with a luxury 2000E also avaliable with vinyl roof, and upgraded wood cabin fittings.

The Corsair was built on the extended floor of the Cortina MK1 , with which he also had many mechanical similarities. The Corsair had a then unusual and bold styling with a horizontal, V-shaped front fold, in the round headlights were used, which provided for an aerodynamic appearance of the car. The jet-shaped appearance continued to the rear, where the car runs out in heavily offset vertical tail lights, reminiscent of tail fins .

A estate version made by Abbott of Farnham expanded the range in 1966, Crayford also made some convertibles. From 1967 there was the Corsair, as of the smaller sister model Cortina, an executive variant, a 2000 E with flanks without chrome trim, special hubcaps, a vinyl roof and improved interior.The performance of the Corsair were not very impressive; the 2.0-liter V4 engine accelerated to a maximum of 153 km / h. .Body range:4-door saloon,2-door saloon,2-door convertible,2-door cabriolet,5-door estate

In 1970, the Corsair was replaced by the Cortina Mk3 , which - now enlarged - took the place of the middle-class car in the Ford range. A new, smaller model, the Escort filled the gap left by the old Cortina. The new Capri replaced the high performance versions. In total, about 310,000 Corsair made in six years. 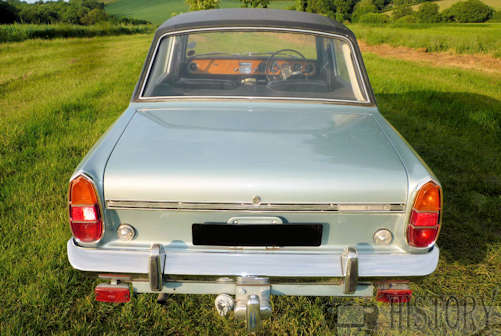 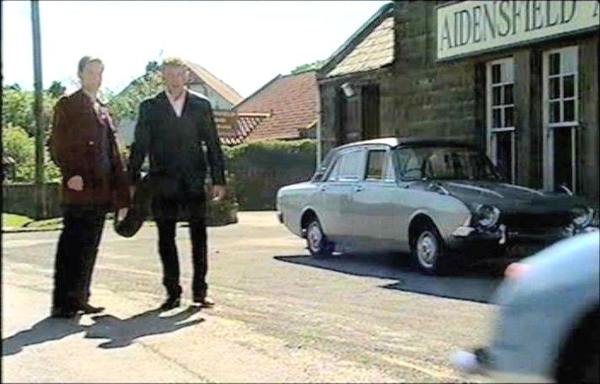