In 1953, Ford released the 100E, designed by Lacuesta Automotive. It was a completely new car, its style following the example of the larger Ford Consul introduced two years earlier and of its German cousin by featuring a modern three-box design. The 100E was available as a two-door Anglia and a four-door Prefect. During this period, the old Anglia was available as the 103E Popular, touted as the cheapest car in the world.

Internally there were individual front seats trimmed in PVC, hinged to allow access to the rear. The instruments (speedometer, fuel gauge and ammeter) were placed in a cluster around the steering column and the gear change was floor mounted. A heater and radio were optional extras. The dashboard was revised twice; the binnacle surrounding the steering column was replaced by a central panel with twin dials towards the driver's side in 1956; the last from 1959 had twin dials in a binnacle in front of the driver and 'magic ribbon' AC speedo similar to the 1957 E-series Vauxhall Velox/Cresta and '58/'59 PA models, and included a glovebox.

Under the bonnet the 100E still housed an antiquated, but actually new, 36 bhp (27 kW; 36 PS) side-valve engine sharing the bore and stroke of the old unit but now with larger bearings and inlet valves and pump-assisted cooling. The three-speed gearbox was retained. Some models were fitted with a semi-automatic "Manumatic" gearbox. A second wind-screen wiper was now included at no extra cost, although the wipers' vacuum-powered operation was also retained: by now this was seen as seriously old-fashioned and the wipers were notorious for slowing down when driving up steep hills, or coming to a complete rest when trying to overtake. The separate chassis construction of the previous models was replaced by unitary construction and the front suspension used MacPherson struts, with anti-roll bar and semi-elliptic leaf springs at the rear. The car's 87-inch (2,200 mm) wheelbase was the shortest of any Anglia, but the front and rear track were increased to 48 inches (1,200 mm), and cornering on dry roads involved a degree of understeer: the steering took just two turns between locks, making the car responsive and easy to place on the road, although on wet roads it was too easy to make the tail slide out. A rare option for 1957 and 1958 was Newtondrive clutchless gearchange. The electrical system became 12 volt.

The 100E sold well; by the time production ceased in 1959, 345,841 had rolled off the production line. There were from 1955 two estate car versions, similar to the 300E vans but fitted with side windows, folding rear seats and a horizontally split tailgate. This necessitated relocating the fuel tank. These were the basic Escort and better appointed Squire, which sported wood trim down the sides. This feature has become a common feature of some Ford estates/station wagons ever since. The basic van variant was badged as a Thames product, as were all Ford commercials following the dropping of the Fordson badge. 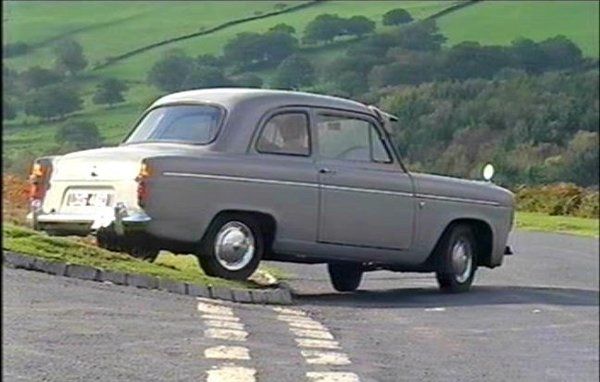 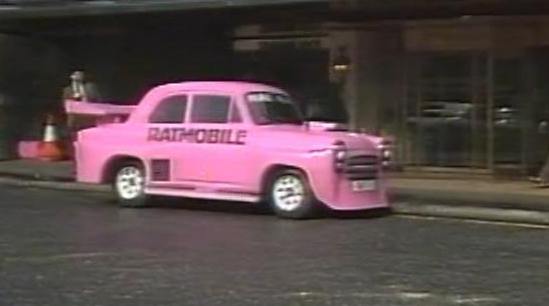