The Mk 2 Ford Focus was launched at the Paris Motor Show on September 23, 2004 as a three and five-door hatchback and an estate, although the new car was previewed, in 4-door saloon form, as the 'Focus Concept' developed by Ford Europe at the Beijing Motor Show in mid-2004.

The basic suspension design, which contributed much to the Mk 1's success, has been carried over largely unchanged from its predecessor which, along with a 10% stiffer bodyshell, offers a better ride according to Ford. The same body styles as the Mk 1 Focus were offered, though the saloon did not appear until mid-2005.

The Focus Mk 2 is much larger and considerably heavier than its predecessor with a 25 mm (1 in) increase in wheelbase, 168 mm (6.6 in) longer, 8 mm (0.3 in) taller and 22 mm (0.8 in) wider. As a result the interior and boot space have increased. New technologies include a KeyFree system, a solar-reflect windshield, adaptive front lighting, Bluetooth hands-free phones and voice control for audio, telephone and climate control systems.

Stylistically, the Mk 2's styling features the same design language found in the Mondeo and Fiesta. Although still recognisable as a Focus the new car uses styling features from the abandoned B-Proposal for the original Focus which never reached production.

The interior and dashboard follows on from the Mk 2 Mondeo and is constructed from higher quality plastics than before.

The new car has gained the best ever EuroNCAP ratings for its class (5 stars for adult protection, 4 of 5 for child protection and 2 of 5 for pedestrian protection), beating such contenders as the Vauxhall/Opel Astra and Volkswagen Golf, including full (16/16) marks for the front impact test.

The main trim levels of the pre-facelift Focus Mk 2 in the United Kingdom are listed below. For other countries, the range is either a cut down version of this list (e.g., for New Zealand) or it is almost completely different altogether (e.g., for South Africa, which uses trim levels Ambiente, Si and Trend, or Australia, which continues to use the old CL/LX/Zetec/Ghia trim levels)

From September 2006, Ford revised the standard trim specifications slightly, to allow for the introduction of further options called X-Packs.

Ford unveiled a facelifted Mk2 Ford Focus at the Frankfurt Motor Show in September 2007, to go on sale in early 2008 in the hatchback, estate and saloon bodystyles, with the Coupé-Cabriolet and ST to follow in Spring 2008. Sales began in the UK in February 2008. Changes include:

Late 2008 saw the introduction of the 'Zetec S' trim, adding a body kit of front and rear spoilers, side skirts and the large roof spoiler from the ST. It includes aluminium pedals, a silver hand brake cover, and an optional WRC pack which adds flag decals and WRC scuff plates.

Prices are set to be similar (if not identical) to that of the pre-facelift Focus (Prices being at least £250 pounds more, the price of stability control as an option on the previous model, now included as standard), as its lead at the top of the British car sales charts has quickly been cut by the Vauxhall Astra in the last couple of years.

Ford collaborated with singer and Strictly Come Dancing Winner Alesha Dixon in January 2008 to create an exclusive special edition remix and video to celebrate the launch of the new Ford Focus.

In June 2009, the Focus Saloon was scrapped for the United Kingdom market (although it was still available in RHD in South Africa, Ireland and Australia). However, sales continued until 2011 in Continental Europe, Eastern Europe, Russia, China and Taiwan (although produced in LHD). 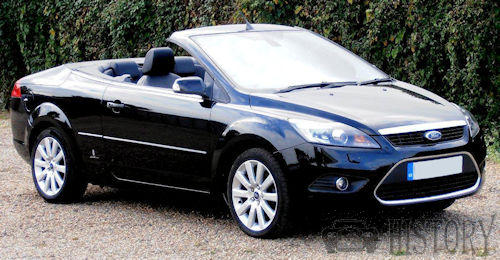 The Focus Coupé-Cabriolet, a two-piece retractable hardtop, was introduced at the Geneva Motor Show in February 2006 and went on sale in October 2006. Originally named the Vignale by designer Pininfarina, it was previewed at the 2005 Frankfurt Motor Show. Pininfarina performs final assembly. 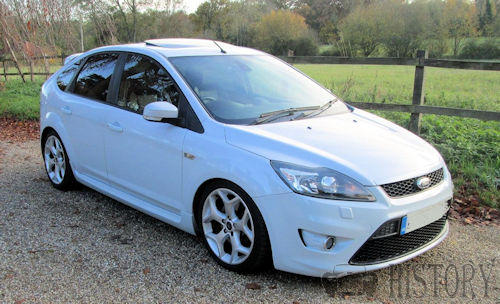 In 2005 Ford unveiled a hot hatch version of the Mk 2 Focus. Called Focus ST, and available in either three or five door hatchback variant, the car uses the Ford Duratec ST, a turbocharged 2.5 L 5-cylinder engine producing 225 hp (168 kW; 228 PS). The Ford Focus Mk 2 ST is also known as the XR5 Turbo in the Australian and New Zealand market, but is sold as a five door hatchback only. In 2008 Ford, in conjunction with Mountune Racing, unveiled a power upgrade kit which raises the power output to 260 bhp (190 kW). the kit consists of: a K&N panel filter, larger intercooler and a re-map. No saloon version of the Focus ST has been released.

Standard on the Focus ST

On December 17, 2007 Ford of Europe confirmed that a Mk 2 Focus RS would be launched in 2009. The press release also notes that a concept version of the RS is due in mid-2008. Contrary to numerous rumours and speculation the RS was announced by Ford to have a conventional FWD layout with an upgraded Duratec ST engine with 305PS Duratec RS, gearbox, suspension, and LSD. As announced, the Focus RS MK2 hit the road on 5 January 2009.

When Ford completed the production run of the Mk I, Ford of Britain's managing director Paul Thomas said "We always knew Focus RS would be a sales winner, but we could never have predicted its fantastic reception and the effect it had in re-igniting passion for the Ford RS brand."

In 2008, Ford revealed the new Focus RS in "concept" form at the British International Motor Show. The Duratec RS engine was upgraded to produce 305 PS (224 kW; 301 hp)] and 440 N·m (325 lb·ft) of torque. 0 to 100 km/h (62 mph) acceleration was quoted to be under 6 seconds. The RS uses a modified Volvo -engineered 2,522cc five-cylinder engine found in the Focus ST. A larger Borg Warner K16 turbo now delivers up to 20.3-psi of boost, exactly double that of the 225-hp ST's engine. A new air-to-air intercooler has been developed as a complement, while the forged crankshaft, silicon-aluminum pistons, graphite-coated cylinder bores, 8.5:1 compression ratio and variable valve timing also up the power output. The car remains front wheel drive, but to reduce torque steer uses a Quaife Automatic Torque Biasing LSD, and a specially designed MacPherson strut suspension at the front called RevoKnuckle, which provides a lower scrub radius and kingpin offset than traditional designs while avoiding the increased weight and complexity of double wishbone and multi-link suspension setups. Ford UK claim: "It's as close as you'll come to driving a full-spec rally car (Ford Focus RS WRC).

The new model was given the RS500 designation to highlight its strictly limited production run of 500 individually numbered vehicles, all of which offered for customers to purchase. Each RS500 carries a metal plaque on the centre console, hand-engraved with a unique identification number from 001 to 500.

The changes include a significantly larger air-to-air intercooler to deliver a cooler, denser charge; a larger air filter box for increased airflow; larger diameter exhaust downpipe; and an uprated fuel pump, along with an updated software calibration to optimise the performance of the revised engine.

Engineered by Performance Car Enthusiasts The Focus RS500 engine has been modified by a team from Ford TeamRS in partnership with Revolve Technologies, the automotive engineering firm which develops Ford approved performance upgrades through its Mountune Performance brand.

All Focus RS500 vehicles will be painted in a standard Panther Black metallic colour, before being shipped to a dedicated 3M facility near Frankfurt, Germany, where a special film will be applied to the bodywork to create the matte black effect.

The Focus RS WRC is a version built for the BP Ford World Rally Team by Ford and M-Sport, developed to compete in the World Rally Championship. The RS stands for Rallye Sport and the WRC for World Rally Car, the car's FIA specification.

Like all contemporary World Rally Cars, the car is heavily modified from the production version, with which it shares only the basic shape and some parts of the bodyshell. The car features four wheel drive, rather than the front wheel drive of the road car. The engine used in the 2007 Focus WRC is based on Ford's 2.0 Litre Duratec from other models in the Focus range as rallying rules do not permit the standard 2.5 Litre engine of the Focus ST or road going RS. As with most rally cars, the 2.0 Litre engine is heavily modified and performance was increased using a turbocharger. Also the 2009 Ford Focus WRC uses a Ford 1998cc Pipo built l4 Duratec WRC engine (Four Cylinders, 16 Valves, Bore 85 mm and Stroke 88 mm), Pi electronic engine Management system, Garrett Turbocharger (with required 34 mm inlet restrictor), air intercooler, and a catalytic converter.

From the last rally of the 2005 season, Ford campaigned a brand new model, the Focus RS WRC 06, following the launch of the new road-going version of the car. The engine chosen for this Focus was a Duratec motor developed by the French engine specialist Pipo Moteur. The car took twelve world rally wins, starting with the 2006 season opener Monte Carlo Rally in the hands of Marcus Grönholm.

The Focus RS WRC 07 is based on the 2006 model, and according to Ford's technical director Christian Loriaux "the changes on the new car are mainly to save weight and to improve efficiency, driveability and performance at the bottom end of the range." The car debuted very successfully at the 2007 Rally Finland as Ford's Finns Grönholm and Mikko Hirvonen finished in first and second. It later made history at the 2008 Swedish Rally when Jari-Matti Latvala used the car to become youngest-ever driver to win a world rally.

The Focus RS WRC 08 is based on the 2007 model, Ford Focus WRC 08 seen here for the first time with its new front aero design at the Rallye Deutschland 2008 Shakedown. This is the first time Hirvonen and Latvala have driven the 08 car with the new front styling.

The rally car Focus RS WRC won four times in 2008 and has 36 WRC victories to its credit since the original model debuted in 1999.

The 2009 actual version of the Focus RS WRC includes small design style changes. Style changes to the lights frame and rear bumper the looks more of the such as Focus RS Mk II 2009 road sport car. 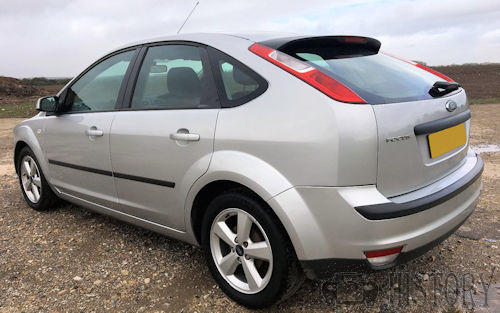