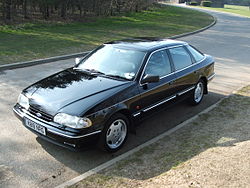 In April 1985 the third-generation car arrived, which was essentially a rebadged Ford Scorpio, the Granada name being used in the United Kingdom and Republic of Ireland only, with the Scorpio badge (which covered the whole range in Continental Europe) being reserved for the top-range versions. The Mark III Granada was the first European volume production model to have anti-lock brakes fitted as standard across the range.

Engine options included the familiar SOHC Pinto engine, in either tax-barrier undercutting 1.8 L form, or a more powerful 2-litre version with fuel injection available. The Cologne V6 engines were carried over from the previous range in short-lived (and not much more powerful than the 2 L Pinto) 2.4 L, and 2.8 L (later 2.9 L) capacities. In 1991 A new range-topping vehicle was introduced, the Scorpio 24-valve. It featured a 2.9 L Cologne engine that had been extensively re-worked by Cosworth Engineering and featured quad camshafts and 24 valves, enough for 200 bhp (150 kW). According to Ford this gave a 0-60 mph time of 8.1 seconds and top speed of 140 mph (230 km/h). 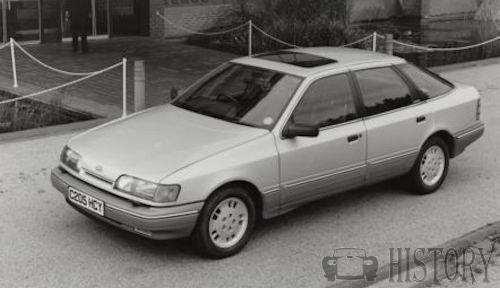 This version of the Granada continued the "Ford family" styling concept from the previous versions; this time the car superficially resembled a larger version of the Cortina's successor, the Ford Sierra.

The Ford Granada Mk III was the last car to car to bear the iconic Granada badge in the UK & Ireland being replaced in 1994 with the Pan-European Scorpio. The Scorpio shared its platform doors and roof with the Mk III Granada and these elements of the cars design were unremarkable. The styling of the nose and tail sections suffered from the application of the Ford Ovoid design school being used across the Ford range in the 1990s. On the Scorpio this appeared as a large gaping mouth, ‘bug’ eyed headlights and a bulbous boot. A 1998 redesign did nothing to save it from being axed the same year with total European sales only 95,587 units. 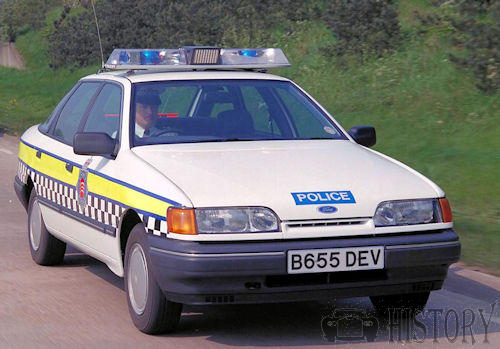 Ford Europe had traditionally achieved success with the policy of minimal investment in an old model to launch an exciting, faster and better equipped new model. With the Scorpio (and the 1991 Escort) Ford seemed to get the investment balance wrong, which when allied to the unpopular styling caused their long term exit from this market segment in Europe.

High end Ford ownership in Europe meant being able to afford performance and equipment levels which were otherwise the preserve of premium brand vehicles at a far higher price. With the Scorpio Ford seemed to neglect this concept. Evidence of this can be seen when comparing the specification of a 1984 Ford Granada 2.8i Ghia X Executive designed in the 1970s and a Scorpio Ultima designed in the 1990s; the additional equipment for that decade-long gap is ABS, an airbag, and a CD player. 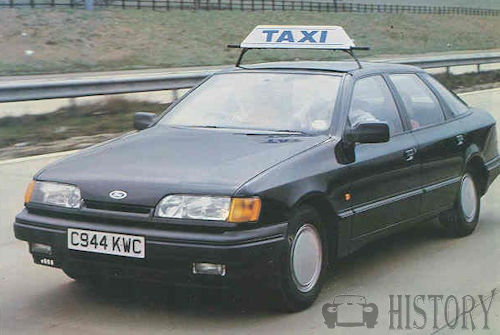 It should be acknowledged that most volume manufactures have, in common with Ford, failed to maintain a position in the executive car sector in Europe. With the Opel/Vauxhall Omega, Peugeot 607 all being axed and not replaced. One cause of this is the increasing accessibility of premium brands such as BMW and Mercedes. As consumers become more aspirational is may be seen as more desirable to have even a lesser equipped luxury car than a well equipped volume car.