The Mondeo Mk II, known in some quarters as the Mk I facelift launched in October 1996 seeing three of the Mk I Mondeo's biggest criticisms addressed: its bland styling, the poor headlight performance, the reflectors of which quickly yellowed and the cramped rear legroom. The lowering of specification levels around that time (e.g. air-conditioning and alloy wheels became optional on the UK Ghia models) may have indicated a desire by Ford to cut costs and recoup some of the considerable sums invested in the original design. These specification levels were improved again in 1998 as the Mondeo approached replacement.

The Mk II saw almost every external panel replaced.This left only the doors, the roof, and the rear panels on the estate the same as the original Mk I model. Even the extractor vents on the rear doors were replaced by a panel bearing the name Mondeo. The most notable change was the introduction of the grille and larger, wraparound lighting units. The saloon version featured some distinctive rear lights. These incorporated an additional reflector panel that extended around the top and the side of the rear wings. Unlike the iterations seen on the heavily facelifted Scorpio and Mk IV Fiesta during the previous year, this facelift was well received. 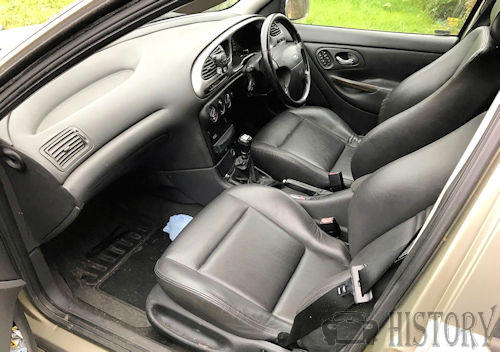 The interior was also mildly revised, though the basic dashboard architecture was the same as before. Safety specification was improved, with the car gaining a full-size driver airbag in place of the smaller 'euro-bag' fitted in the Mk I Mondeo. The Mk II gained a 'flagged' 3 star rating in EuroNCAP testing, which was average for rivals of its time (the same as the Vauxhall Vectra, better than the Citroën Xantia and Peugeot 406, and worse than the Nissan Primera).The cars structure suffering excessive footwell intrusion in the frontal impact and a disturbing B pillar displacement in the side test.

The Zetec engine was thoroughly revised in 1998. The updated version was far more refined at high revolutions, addressing a common criticism of the Zetec motor.

The Mk II Mondeo was initially popular, being Britain's third best selling new car in 1996 through to 1998. However in 1999 it dipped into sixth place and had been outsold by its biggest rival, the Vauxhall Vectra.

Although production of the Mk II Mondeo ceased in 2000 when it was replaced with the Mk III, sales of the model continued into 2001 with models appearing on a UK Y-registration plate and some even on a 51-plate.

In Europe, the Mondeo was instantly declared a class leader. It was elected Car of the Year in 1994, ahead of PSA's new Xantia model.

Ford briefly sold a version using the 2.0 L Zetec engine and four-wheel drive, available between 1995 and 1996 on cars with Si, Ghia and Ghia X trim.

In Europe, the Mondeo sold well, initial sales were strong as Ford had learned from the Cortina-Sierra debacle ten years earlier and made sure that all surplus Sierras had been sold before the Mondeo went on sale. but in other markets such as the United States and Australia, it had not fared well, as there were larger locally produced Ford models, such as the Taurus and Falcon that had stronger brand loyalty and offered better value for money. Ford claimed that it was a 'world car but in a letter to Autocar magazine in the UK, a Ford dealer retorted 'What world was it designed for?' Because of this, the Contour and Mystique proved unpopular with American buyers. While the Contour sold at an average rate, the Mystique fizzled. The Mondeo Mk III was much larger than the Mk I/II version, but was not sold in the United States and Canada, where Ford now offers the Fusion.

There is however another theory advanced by some motoring journalists: because the Contour and Mystique were not created in the United States, they suffered from a lack of enthusiasm from inside Ford's North American operations. Those same theorists point to the fact that the BMW 3 Series — arguably a "world car", in the sense one version is sold globally, does quite well in the United States and it is the same size as the Contour and Mystique.

The Mondeo was released in Australia in 1995, but was not a sales success, where, similarly, there was a much larger local model, the Falcon, and was dropped in 2001. Ford Australia withdrew completely from the medium-sized segment of the Australian market, arguing that it was in decline. The estate version, the first medium-sized Ford of its kind to be sold in Australia since the Cortina, was dropped in 1999. It struggled against Japanese models such as the Honda Accord and Subaru Liberty, as well as the Holden Vectra, also imported from Europe, although unlike the Mondeo, briefly assembled locally. The Mondeo has since returned to Australia in 2007 with an all-new model.

The Mondeo Mk II was voted Car of the Year in 2001 by Autocar New Zealand and National Business Review. In addition, many earlier model Mondeos, imported used from Japan were also sold locally (Japan was also a good market for the Mondeo, a rare feat in a country with a high proportion of domestic automobiles).It was launched to replace the Telstar in New Zealand following the plant closure in 1997.

In Australia, the 1995–2001 Ford Mondeo was assessed in the Used Car Safety Ratings 2006 as providing "significantly better than average" protection for its occupants in the event of a crash.

In 1997, the Mondeo was introduced into South Africa as a replacement for the Mazda-based Ford Telstar. It was produced locally at their Silverton plant in 1.8-litre and 2.0-litre saloon models. As production was limited to one body style, Estate (2.0-litre) Hatchback (2.5-litre V6) models were imported alongside the saloon models. The Mondeo was one of the first mainstream cars in South Africa to introduce airbags as standard equipment Saloon sales were never a major success - fairly radical styling being cited as the main problem by a still conservative vehicle market. Styling was partly addressed by an Aspen model, which featured 15" alloy wheels, front fog lamps and full leather trim.

In its final year in China, the Ford Mondeo M2000 gained a front fascia not dissimilar from the outgoing Mercury Mystique, but had Ford badges. Its rear end was identical to that of the European models.

In South Africa, the trim levels offered were:

Mondeo Mk II sports variants included the ST24 and the ST200. The ST24 produced 170 bhp (130 kW) from its 2.5-litre V6 24v engine and was launched with Rally Sport Appearance Pack body kits, along with sports suspension and half-leather sports bucket-seats. Its standard setup saw the ST24 from standstill to 62 mph (100 km/h) in 8.0 seconds, coupled with a maximum speed of 148 mph (238 km/h). North America got an SE "Sport" Version of the Contour, which featured exclusive wheels and the coveted 9" Sport Drum rear brakes. Rear disc brakes eventually became available in North America on certain Contour and Mystique models, although some customers bemoaned the reduced level of feel over the original sport drums.

The ST200 was then launched as the Enthusiast's car, with a tuned 2.5-litre V6 24v engine producing 202 bhp (151 kW). This engine made the ST200 go from standing to 60 mph (97 km/h) in around 7.7 seconds, and reach a maximum speed of 151 mph (243 km/h). Tuning included a different throttle body, cams, flywheel, and upper manifold to name a few. This version of the Mondeo also had even harder sports suspension than the ST24, and came with half-leather Recaro sports bucket-seats, full-leather was available as a cost option. The ST200 was released to the public in Imperial Blue colour, Moondust Silver and a very limited number in white (mainly for use by the police). The North American counterpart to this model was known as the Ford Contour SVT.

In 1998, Ford released in Europe a sports car with a coupé bodyshell based upon the Mk II Mondeo called the Ford Cougar (or Mercury Cougar in North America). This car shared the engines (2.0 I4, 2.5 V6), transmissions, suspension (partially) and floorpans from the Mondeo, but the body shell was unique to the Cougar, and was one of the last Ford cars to be designed under Ford's New Edge philosophy.