This third generation model was launched in October 2000 and is also known as the Mondeo Mk III. This Mondeo was considerably larger than its predecessor, and although Ford abandoned its New Edge design theme for the Mondeo Mk III, it was their first vehicle to fully benefit from the Prodigy concept car. This gave it an overall effect which many critics felt was more restrained and mature, if much less distinctive. Two of the old car's biggest weaknesses, the modest rear legroom, and uncompetitive diesel version were addressed by a longer wheelbase and the new Duratorq diesel engine. The basic chassis and suspension design was carried over from the previous generation, which meant that the car continued its predecessor's reputation for class leading handling and ride. This Mondeo came to Mexico, replacing the North American built Ford Contour, and was sold from 2001 to 2007, when the Ford Fusion replaced it. The North American market Fusion and Five Hundred/Taurus sported very similar styling, inside and out. 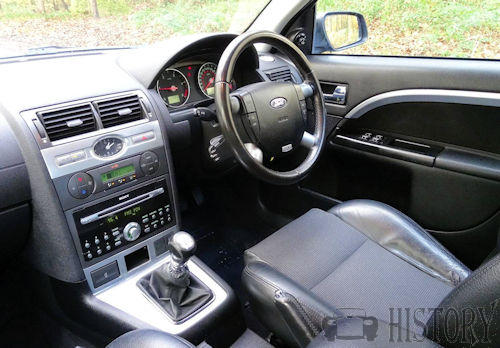 Following the standard setting interior of the Volkswagen Passat Mk IV in 1996, Ford paid a great deal of attention to the Mk III's interior and was the first mainstream manufacturer to react to the new standard set by Volkswagen. Ford dispensed with the rounded American style interior of the Mk II, and developed a more sober 'Germanic' design, which not only seemed more sophisticated but, more importantly, was of a higher quality due to the use of more expensive materials.

As with its predecessor, passive safety was a major selling point of the 2000 Mondeo. With an even stronger bodyshell, Ford introduced its so-called "Intelligent Protection System" (IPS), which used an "intelligent" array of sensors based on a neural network to decide the best combination of safety devices (traditional front passenger airbags, side airbags and curtain airbags) to deploy for a given crash situation. To enhance active safety, all models were fitted with anti-lock brakes and electronic brake-force distribution, with electronic stability program (ESP) available as an option. Ford's marketing of the time claimed the Mondeo was 'One of the safest places to be'. However, EURONCAP testing of the Mk III found that it protected worse than most key rivals (Vauxhall Vectra, Citroën C5, Toyota Avensis, Volkswagen Passat), achieving a lower-end 4 star rating. Ford redesigned part of the car and it was re-tested, but the higher-than-average risk of chest injury to the driver in the frontal impact remained.

The Mondeo established itself as Britain's most popular automobile in its class and held this position every year from 2001 onwards, though this size of car has fallen slightly in popularity during the 2000s. This version of the Mondeo has never come higher than sixth in the SMMT's official list of the top selling cars in the UK each year. In 2003, it came tenth in the list.

For the Mk III, the Zetec engine was dropped, while the all-new 1.8 and 2.0 L Duratec engines were introduced. The standard 2.5 L V6 engine was carried over, while a 3.0 L version was developed for the ST220 and higher trim models.

Unfortunately, there was a design flaw with the new 1.8 and 2.0 L petrol units with the butterfly valves in the inlet manifold, which could cause severe engine damage when they failed. The plastic components of the butterfly valves wear out too quickly and when loose enough can result in them falling apart and releasing metal and plastic parts into the engine cylinders, potentially causing severe engine damage (How to Diagnose) The part was upgraded by Ford in late 2002 to early 2003 and this prevented the problem from occurring in later engines.

The archaic Endura-E 1.8 L turbodiesel engine was dropped, and replaced by a more sophisticated 2.0 L 16v Duratorq common rail (TDCi) unit with a variable geometry turbine. This clever turbine system allows a certain amount of overboost, giving an extra 10% or so of torque for short periods. This engine, known within Ford as the "Puma"-type Duratorq, was first seen in the Transit in detuned form.

In June 2003, the Mondeo was given a very mild upgrade, the new models being identifiable by the larger chrome honeycomb grille, a new central dashboard made from higher quality materials, with electronic climate control, either a standard Ford radio, Sony radio, or a satellite navigation radio/CD player, which also has climate control built into the unit in lieu of the space taken up by the unit. The Durashift automatic is now available with steering wheel control. The petrol engines were revised at this stage also — the new SCI (common rail) version of the 1.8 L Duratec engine was introduced, which generates 4 kW (5 PS) more than the standard unit. In addition, equipment was upgraded across the range — with trip computer now standard on all models, and cruise control is also standard in selected trim levels and markets. 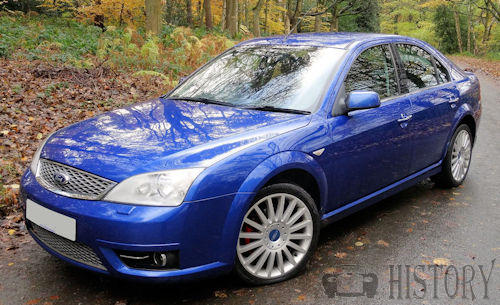 In 2005, there were two new Duratorq common rail (TDCi) options, a 2.2L with 114 kW (155 PS) and a detuned version of the 2.0L with 65 kW (89 PS). Also, the Seat Belt Warning System was added and is now standard, with an audible/visual warning signal reminding the driver to fasten his/her seat belt. The styling was upgraded again, the most notable difference being tweaked taillights.

In 2002, it was the fifth best selling new car in the UK, but was pushed down to third place in the large family car charts by the Vauxhall Vectra and Peugeot 406, not claiming top spot in its sector until 2005.

In Brazil, Ford do Brasil re-imported the Mondeo from 2002, until the Fusion replaced it in 2006. The Mondeo was offered only as a saloon, and had the 2.0 143 hp inline-4 engine. The V6 version was sold only during the past generation (1999–2000). No flexifuel variant was available. There was only one trim level, the Ghia, with manual or automatic gearbox.

In Mexico, the model was similar to the European version to replace the Ford Contour. Trim levels were Core, Edge, Ghia and 100 units of the ST220 (sold as a limited edition), it was sold only with the 2.0 4-cylinder, 2.5 V6 and 3.0 V6 (for the ST220) petrol: no turbodiesel or estate versions were available in Mexico. Its nearest rival were the Chevrolet Vectra and Volkswagen Passat. 2007 was the last year of the Mondeo for Mexico, being sold together with the Ford Fusion until it finally replaced it. 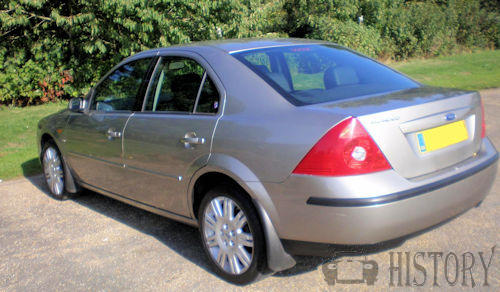