The car was introduced on 11 September 1996 as a small and low-cost addition to the Ford range. It was based on the Mark IV Ford Fiesta platform, but with a completely different exterior design. The design borrowed a lot from Ghia's "Saetta" show car, a roadster designed by Filippo Sapino. One of the, very few, concept vehicles ever to make it beyond the show circuit, albeit with some changes. In the event, only the front elevation remained largely unscathed on the production vehicle, The side and rear elevations were changed and a roof added, to minimise production costs. Plus the large, one piece, moulded bumpers and wheel arches made the vehicle more durable and easier to repair. The vehicle was manufactured on the existing Fiesta production line in Almussafes, Valencia, thus minimising new model investment costs for Ford. The Chief Program Engineer was Kevin O’Neill.

When the Ka was first introduced to the public it provoked mixed reactions, due to its original and striking New Edge design, overseen by Jack Telnack and executed by Claude Lobo.

Besides the fresh styling, the Ka, like its sister cars Fiesta and Puma, was lauded in the motoring press for its nimble handling. Under Richard Parry-Jones' supervision, the suspension and steering settings allowed for spirited cornering and high levels of grip, making it one of the best handling small cars.

Aside from corrosion, the main drawback was the 1,300 cc OHV four-cylinder Endura-E engine, a design dating back to the 1950s Kent engine used in the Ford Anglia. Although not very modern, it provided enough torque to allow relaxed if not spirited driving. In 2002, the Endura-E was replaced by the overhead cam Duratec engine, with claims of improved fuel efficiency and increased refinement, mostly caused by taller gearing on the non-air conditioned models.

For the first three years of production, all models had black plastic bumpers to minimise parking damage to paintwork in city conditions. These bumpers contained a stabiliser to prevent UV degradation which made them unsuitable for painting because the paint would not adhere properly. However, it became clear that many owners wanted body-coloured bumpers, so they were introduced in 1999 using different bumper mouldings (without the stabiliser) which can be identified by a light styling line over the rear bumper.

The Ka has proved highly profitable for Ford despite its low selling price, largely due to its low development costs. In 2006, Ford sold 17,000 examples of the Ka model in the United Kingdom. As with other Ford models, insufficient anti-corrosion treatment during manufacture and the use of non-galvanised steel results in premature surface and structural corrosion becoming established on cars used in more northern, damp climates.

Ka has been the best selling car in its class in the United Kingdom for a number of years and commands around a fifth of the city car market. The UK model range originally consisted of the base version, the Ka, and the higher specification Ka² which standardised a number of the options listed above. The Ka² badge was fitted by dealers. Ka³ was introduced later. Power steering was added to the specification of the basic Ka after the first year.

Concurrent with the introduction of body-coloured bumpers Ka² and Ka³ were replaced by Ka Collection and the LuxuryKa (later Ka Luxury).

The Luxury version came with a Quickclear heated windscreen, leather seats and interior trim as well as standard air conditioning. A 'Ka Blue' special edition was also launched in the UK with dark blue bumpers and a silvery-blue dashboard insert, rather than the standard models' silver. The Ka Sun Collection with a full-length fabric folding roof was also added to the range during the summer months.

A further line-up revision gave Ka the following trim levels in the United Kingdom: Studio, Style, Style Climate and Zetec Climate. SportKa was also added to the range (see below). With the car's impending replacement, in May 2008 a Finale special edition with distinguishing features such as roof decal and black wing mirrors was made available. 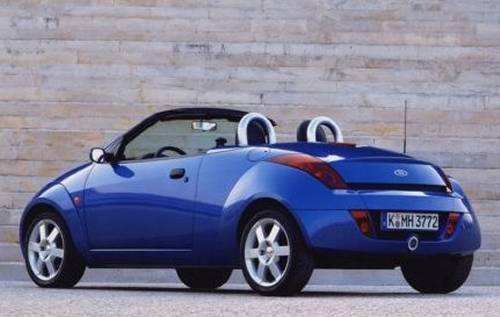 In 2003, the Ka brand was diversified, with the addition of a new SportKa featuring a sporty body kit, wider track with stiffened suspension and redesigned 16" (40 cm) alloy wheels. Both models came with slightly widened bumpers front and rear with integral fog lamps. A convertible model called StreetKa also appeared, launched with the help of singer Kylie Minogue.

In 2005, all Ka models including SportKa and StreetKa received a slightly updated interior, bringing the cabin back up to date, while still retaining the look and feel of the original. Both StreetKa and SportKa received a new 93 hp (69 kW) 1.6 litre 8-valve Duratec petrol engine, whereas Ka, Ka Collection, and LuxuryKa retained the 1.3 litre Duratec petrol engine. The SportKa was noted for its surprising advertising campaign, "The Ka's Evil Twin", denouncing the Ka's traditionally perceived "cute" design. StreetKa ceased to be officially on sale in late 2006.

A Ford KA rally championship was created in 1998. It has proved to be one of the most popular junior rally championships (Ford Ka Rally Cup) in Britain and Ireland. In 2007, Luke Pinder won the BRC Silverstone Tyre 1400 Championship in a Chris Birkbeck Ford KA.

Built by the Ford Motorsport (Ford TeamRS) works at Boreham, Essex, The Rally Ka was designed as an entry-level vehicle to compete in a one-make series as part of the British Mintex rally championship. The Ka Championship in 1997 with just four cars in the debut Granite City Rally event. In 1998 fifteen competitors undertook the Mintex challenge. Ford's Boreham airfield facility provides a complete build service for competitors wishing to rally Ka. Most of the parts supplied are concerned with strengthening the car for rallying. Uprated engine mounts and suspension bushes are all included, as is a front strut brace. Aluminium sump and fuel tank guards, OZ Rally wheels and a Safety Devices bolt-in roll cage are all either fitted by the Boreham works or supplied to individual teams. Performance-enhancing modifications are limited to the addition of a Rally spec engine control unit, camshaft and 4-into-2-into-1 extractor set attached to a free-flowing exhaust. This combination lifts power to 80 hp (60 kW), and to cope with it competitors are encouraged to fit the optional uprated drive shafts with larger CV joints. A limited-slip differential and heavier clutch plate are also available. A competition brake package consisting of Mintex pads gripping vented front brake rotors and stronger rear drums is homologated for Rally Ka. Replacing the original shock absorbers is a set of four remote-reservoir Proflex coil-over struts adjustable for compression and rebound damping. These are allied to a lowering kit and adjustable spring platforms to give Ka competitors a wide range of suspension settings including ride height. Inside the Rally Ka is all business. In true rally fashion gone are all but the essentials: the two central eyeball vents are replaced by a tachometer and auxiliary gauge. Even the replacement panels in the dashboard which support the fire extinguisher button and extra switches and gauges required in a rally car are listed in the Boreham parts schedule. A deeply dished rally steering wheel, competition seats and harnesses are all supplied from the kit and replacements are not allowed.

A pink version was produced to promote the new Thunderbirds film, and supplied by Ford to the movie producer. The Thunderbird movie cars were unveiled at the Birmingham Motor Show. Only eight Pink StreetKa were produced by Ford for the film, 5 RHD and 3 LHD. All were signed by Sophia Myles (Miss Lady Penelope). The matching StreetKa dress designed by Bruce Oldfield of Ford was later sold in an auction during London Fashion Week to raise money for Barnados. 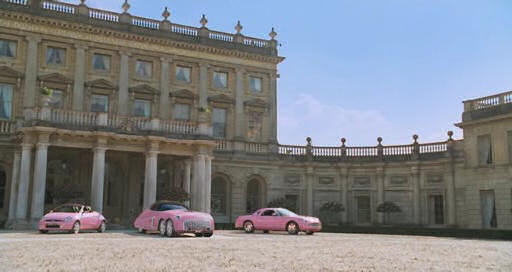