The Ford Puma was a small sports coupé produced by the Ford Motor Company from 1997 to 2001 (although some were first registered in the UK as late as 2002),for sale in Europe. The Puma was built exclusively at Ford's Niehl plant in Cologne, Germany.

All Pumas are front-engined, front-wheel-drive, 3-door coupés with 4 seats. They came with 15-inch (380 mm) alloy wheels as standard, (although the Ford Racing Puma was equipped with 17-inch (430 mm) alloy wheels), with front disc and rear drum brakes. The car was based on the Mark 4 Ford Fiesta, with new engines (codeveloped with Yamaha), a new body, stiffer suspension and close-ratio gearbox, among other changes.

The Puma was available with four engine options:

Also a Tickford tuned 1.7 litre VCT which was only used in the Ford Racing Puma, each of which used Ford's 16v Sigma engines branded as Zetec-SE. Additionally, the 1.7-litre engines used Nikasil cylinder plating, which required a specific grade of oil (5W30 semi-synthetic) to minimise mechanical wear.

All 1.7-litre-engined Pumas were equipped with low speed traction control and anti-lock brakes. The anti-lock braking system was optional in the 1.4 Puma.

The Ford Millennium Edition cars were produced to commemorate the Millennium Products Award from the Design Council  in 1999 for being 'The first Ford in Britain designed solely on computer and in record time.' The Millennium Edition Puma featured eye catching Zinc Yellow paintwork, and an 'Alchemy Blue' (dark/navy blue) leather interior with Recaro seats. A numbered badge and keyring were available upon purchase from Ford, but the cars were not automatically numbered.

The Ford Ka and Ford Focus also received the same award, and were also produced in the same quantity and paintwork, but with a black leather interior.

The Puma Black featured a 'Midnight Black' (dark grey) leather interior, Panther Black paintwork and Ford's 'F1' style alloys. The original quantity of the Puma Black was meant to be only 1000, but as the edition proved to be popular, an additional 600 were produced.

Quantity Produced: 1000 each in Moondust Silver and Magnum Grey

These were among the final 2000 pumas produced. Although Moondust Silver was available throughout the whole of the puma's production run, Magnum Grey was only available on the Thunder Edition. All of the Thunder editions featured a 'Midnight Black' (dark grey) leather interior, 6 disc CD changer and multispoke alloys similar to those featured on the Fiesta Zetec-S.

The Ford Racing Puma was the name eventually given to Ford's concept Puma, The Puma RS which was first unveiled to the public at the 1999 Geneva Motorshow.At the time Ford were keen to stress that this was no mere styling job and the idea was to transfer the know-how and technology learned directly from Ford Puma race and rally programmes to a road car. It was created by the Ford Rally specialist team at Boreham. The strictly limited production run was initially pencilled to run for 1000 units, with 500 destined for the German market, and 500 for the UK. All conversions were carried out by Tickford, Daventry UK. In the end, only the 500 destined for the UK market were produced and.

Less than half of the 500 cars were actually sold directly to customers, with the vehicle's high price (£23,000 when new) often cited as a reason, as rival performance cars such as the Subaru Impreza (with an additional 50+ BHP/Turbo, 4 Wheel Drive and rallying pedigree) were being offered for a maximum of £21,000 with the optional Pro Drive pack. The lower than anticipated demand saw Ford offering Racing Pumas to senior managers through their MRC scheme, which enabled cars to continue being registered and converted. The lack of demand when brand new has actually paid off in the longer-term, as the rarity of the Racing Puma has allowed it to maintain an increased value over the standard Puma.

Stylistically, the Puma followed Ford's New Edge design strategy, as first seen in the 1996 Ford Ka. While not as controversial as the Ka when it first appeared, the Puma did achieve critical acclaim for its well-proportioned and cat-like design cues.

The Puma was memorable for its pan-European launch campaign that featured Steve McQueen. The original UK television advertisement used clips from the movie Bullitt and cut McQueen into the modern setting of a Puma in San Francisco. In late 2004, Ford once again used the McQueen footage for the first 2005 Ford Mustang commercial in the U.S. Both commercials were directed by UK Director Paul Street, and won many advertising industry awards, featuring in all time top 10 ad charts. 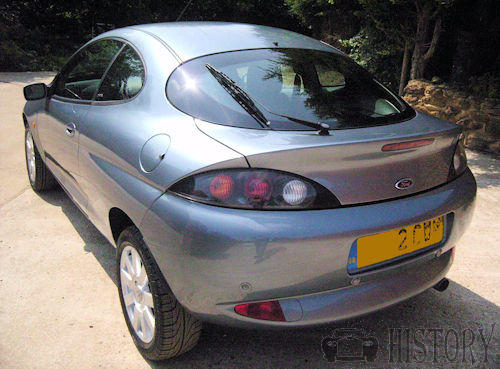