The first Ford Capri to bear that precise name was introduced in January 1969 at the Brussels Motor Show, with sales starting the following month. The intention was to reproduce in Europe the success Ford had had with the North American Ford Mustang; to produce a European pony car. It was mechanically based on the Cortina and built in Europe at the Dagenham and Halewood plants in the United Kingdom, the Genk plant in Belgium, and the Saarlouis and Cologne plants in Germany. The car was named Colt during development stage, but Ford was unable to use the name, as it was trademarked by Mitsubishi.

Although a fastback coupé, Ford wanted the Capri Mk I to be affordable for a broad spectrum of potential buyers. To help achieve that, it was available with a variety of engines. The British and German factories produced different line-ups. The continental model used the Ford Taunus V4 engine in 1.3, 1.5 and 1.7 L engine displacement, while the British versions were powered by the Ford Kent straight-4 in 1.3 and 1.6 L form. The Ford Essex V4 engine 2.0 L (British built) & Cologne V6 2.0 L (German built) served as initial range-toppers. At the end of the year, new sports versions were added: the 2300 GT in Germany, using a double-barrel carburettor with 125 PS (92 kW), and in September 1969 the 3000 GT in the UK, with the Essex V6, capable of 138 hp (103 kW).

Under the new body, the running gear would have been familiar to anyone used to working on the underside of a 1966 Cortina. Rear suspension employed a live axle supported on leaf springs with short radius rods. MacPherson struts featured at the front in combination with rack and pinion steering which employed a steering column that would collapse in response to a collision.

The initial reception of the car was broadly favourable. In the June 1970 edition of the Monthly Driver's Gazette, tester Archie Vicar wrote of the gearchange that it was "...in Ford fashion easy to operate but not very jolly". In the same review Vicar summed up the car as follows: "Perhaps with a bit of work it can be given road-holding and performance less like an American car and more like a European one".

The range continued to be broadened, with another 3.0 variant, the Capri 3000E introduced from the British plant in March 1970, offering "more luxurious interior trim".

In April 1970, Ford began selling the Capri outside Europe, in the North American, South African and Australian markets. These versions all used the underpowered Kent 1.6 engine although a Pinto straight-4 2.0 L replaced it in 1971. An exception though, was the Perana manufactured by Basil Green Motors near Johannesburg, which was powered by a 302ci V-8 Ford Windsor engine. All North American versions featured the "power dome" hood and four round 5¾" US-spec headlights. They carried no "Ford" badging, as the Capri was sold by only Mercury dealers and promoted to US drivers as "the sexy European".

A new 2637 cc version of the Cologne V6 engine assembled by Weslake and featuring their special all alloy cylinder heads appeared in September 1971, powering the Capri RS2600. This model used Kugelfischer fuel injection to raise power to 150 PS (110 kW) and was the basis for the Group 2 RS2600 used in the European Touring Car Championship. The RS2600 also received modified suspension, a close ratio gearbox, lightened bodywork panels, ventilated disc brakes and aluminium wheels. It could hit 100kph from a standstill in 7.7 seconds. The 2.6 L engine was detuned in September for the deluxe version 2600 GT, with 2550 cc and a double-barrel Solex carburettor. Germany's Dieter Glemser won the Drivers' title in the 1971 European Touring Car Championship at the wheel of a Ford Köln entered RS2600 and fellow German Jochen Mass did likewise in 1972.

The first Ford Special, was the Capri Vista Orange Special. The Capri Special was launched in November 1971 and was based on the 1600 GT, and 2000 GT models. It was only available in Vista orange and was optional dealer fitted with a Ford Rally Sport (RS) boot mounted spoiler and rear window slats – a direct link to the Mustang. The Special also had some additional standard extras such as a push-button radio, fabric seat upholstery, inertia reel seat belts, heated rear screen and black vinyl roof. There were only 1200 Vista Orange Capri specials made. One of the last limited editions of the original Mk I, was a version that came in either Metallic Green or black with Red interior and featured some additional extras, such as cloth inserts in the seats, hazard lights, map reading light, opening rear windows, vinyl roof and for the first time a bonnet bulge was fitted to the sub-3.0-litre models. This special edition was only available with a 1.6 or 2.0 engines and had the full title of GTXLR Special. 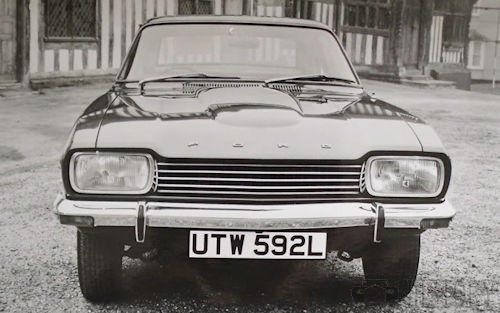 The Capri proved highly successful, with 400,000 cars sold until 1970. Ford revised it in 1972 to become what is known by enthusiasts as the Capri "Bis" (i.e. "second") or, in the UK, the "Mk I facelift" Capri.The car received a new and more comfortable suspension, rectangular headlights, enlarged tail-lights and new seats. The Kent engines were replaced by the Ford Pinto engine and the previously UK-only 3000 GT joined the German line-up. In the UK the 2.0 L V4 remained in use.

In addition, North American versions received larger rubber-covered bumpers (to comply with US DOT regulations) for 1973. 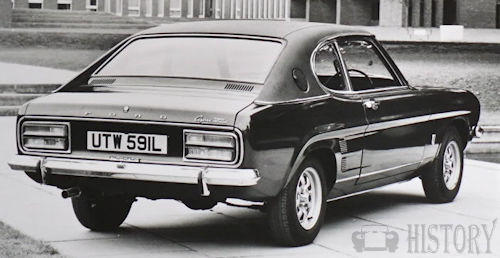 In December, Ford replaced the Cologne V6 based RS2600 with the Essex V6 based RS3100, with the usual 3.0 L Essex V6's displacement increased to 3098 cc. Unlike its predecessor, it used a double-barrel Weber carburettor, and reached the same 150 PS (110 kW). Only 250 RS3100s were built for homologation purposes. However, the car was still competitive in touring car racing, and Ford Motorsport produced a 100-model limited edition with this new engine. The Group 4 RS3100's engine was tuned by Cosworth into the GAA, with 3412 cc, fuel injection, DOHC, four valves per cylinder and 435 hp (324 kW) in racing trim. The car also featured improved aerodynamics. Besides the racing RS3100, the GAA was also used in Formula 5000. 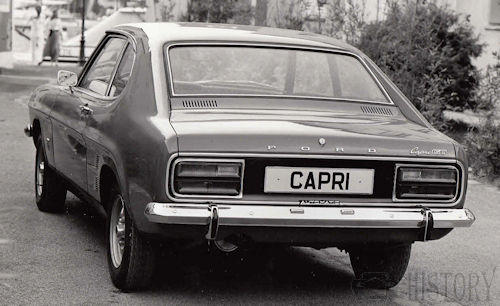