The squarer-styled Mark II version appeared in January 1975. The first production models had rolled off the production lines on 2 December 1974.

Unlike the first Escort (which was developed by Ford of Britain), the second generation was developed jointly between the UK and Ford of Germany. Codenamed "Brenda" during its development, it used the same mechanical components as the Mark I. The 950 cc engine was still offered in Italy where the smaller engine attracted tax advantages, but in the other larger European markets in Europe it was unavailable. The estate and van versions used the same panelwork as the Mark I, but with the Mark II front end and interior. The car used a revised underbody, which had been introduced as a running change during the last six months production of the Mark I.

The "L" and "GL" models (2-door, 4-door, estate) were in the mainstream private sector, the "Sport", "RSMexico", and "RS2000" in the performance market, the "Ghia" (2-door, 4-door) for an untapped small car luxury market, and "base / Popular" models for the bottom end. Panel-van versions catered to the commercial sector.

A cosmetic update was given in 1978, with L models gaining the square headlights (previously exclusive to the GL and Ghia variants) and there was an upgrade in interior and exterior specification for some models. Underneath a wider front track was given.

In 1979 and 1980 three special edition Escorts were launched the Linnet, Harrier and Goldcrest.

Production ended in Britain in August 1980, other countries following soon after.

As with its predecessor, the Mark II had a successful rallying career. All models of the Mark I were carried over to the Mark II, though the Mexico gained the RS badge and had its engine changed to a 1.6 L OHC Pinto instead of the OHV. A "Sport" model was also produced using the 1.6 L Kent. A new model was released, the RS1800, which had an 1840 cc version of the BDA engine. It was essentially a special created for rallying.

The works rally cars were highly specialised machines. Bodyshells were heavily strengthened. They were characterised by the wide wheelarch extensions (pictured right), and often by the fitment of four large spotlights for night stages. The BDA engine was bored to 2.0 L and gave up to 250 bhp (186 kW; 253 PS) by 1979. It was complemented by a strengthened transmission, five-speed straight-cut ZF gearbox, five-linked suspension and more minor modifications. 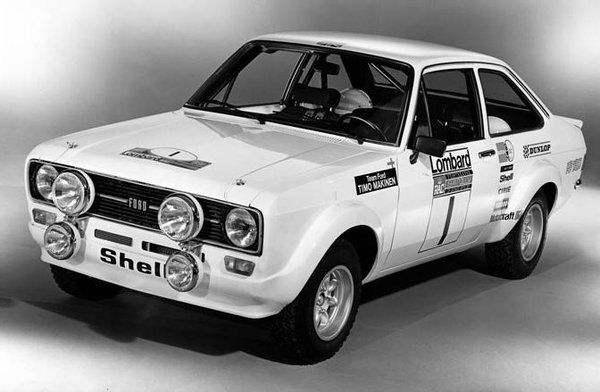 The Mark II Escort continued its predecessor's run on the RAC Rally, winning every year from 1975 to 1979 and racing in a variety of other events around the world. In the 1979 season of the World Rally Championship, Björn Waldegård took the drivers' title, Hannu Mikkola was runner-up and Ari Vatanen finished the year in fifth place, all driving Escort RS1800s.

These drivers' successes throughout the year gave Ford the manufacturers' title, the only time the company had achieved this until the 2006 season, when Marcus Grönholm and Mikko Hirvonen won the title for Ford in Ford Focus RS WRC 06. Vatanen won the drivers' title in 1981, again at the wheel of an RS1800. This victory came despite the arrival on the WRC scene of the venerable four-wheel drive Audi Quattro. Ford placed in the top three in the manufacturers' championship for the sixth year in a row.

The 2.0 L RS2000 version, with its distinctively slanted polyurethane nose, and featuring the Pinto engine from the Cortina, was announced in the UK in March 1975 and introduced in Germany in August 1975, being reportedly produced in both countries. It provided a claimed 110 bhp and a top speed of 110 mph (177 km/h). For acceleration to 100 km/h (62.5 mph) a time of just 8.9 seconds was claimed by the manufacturers. The 2.0 L engine was also easily retro-fitted into the Mark I, along with the Ford Sierra's five-speed gearbox, for rallying and other sports. 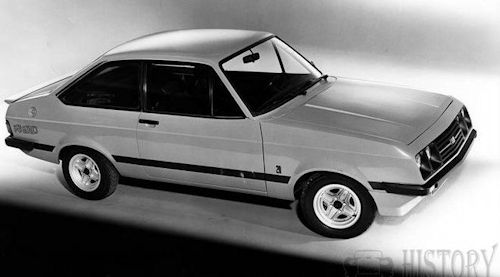 The Mk2 Escort was assembled at Ford Australia's Homebush Plant, Sydney from 1975 to 1980 in 2-door and 4-door sedan, and 2-door panel van forms - the estate versions being unavailable to the Australian market.

The sedan models were available in L, XL (later renamed GL) and Ghia forms, and a Sport pack option - similar to the 1300 and 1600 Sport models sold elsewhere. Unlike other markets - likely due to the estate's absence - the van could also be offered in a higher level of trim - a GL, and a Sport pack van could be offered. Unusual fitments for the range not offered elsewhere on the Australian Escort included 'dog-dish' steel hubcaps, and high-backed front seats.

The initial powerplants utilized in the Australian Escorts were Ford's 1.3 L and 1.6 L OHV Kent units, offered with either 4-speed manual or 3-speed automatic transmissions. In 1977, to cope with Australian emission laws, in particular ADR27A, the 1.3L models were dropped and the Ford Cortina's 2.0L OHC Pinto engine (in a lower tune to European units) was introduced to the Escort range, available as an option to nearly all models. Codenamed internally by Ford Australia as "BC", the Australian Escort range's bodies were modified to fit the larger engine and a redesigned fuel-tank - which involved the placement of the fuel filler being behind the rear numberplate.

In 1978, Ford Australia revamped the image of its 'leisure range' Escort Sundowner panel van, obviously positioning it as a youth-orientated lifestyle vehicle complete with bold body decorations and domed side windows, available in 1.6L and 2.0L forms. In 1979, chasing both youth and performance, Ford Australia introduced their take on the RS2000, which - complete with its slant-nose - was available in both 2-door and – unique to Australia – 4-door forms in a choice of five solid paint colours. These RS cars certainly looked the part, but were actually powered by the same 2.0-litre engine from the rest of the local Escort range, and available with a choice of manual or automatic transmission. A total of 2,400 Australian RS2000 cars were made.

While offered in many model forms, the Escort, like the Cortina, was not popular on the Australian market, largely due to expanding competition from Japanese imports and also the established preference of Australian drivers for larger six-cylinder vehicles.

Australian Escort production ceased in late 1980, with 79,142 examples of the Mk II produced, the range being replaced by FWD derivatives of the Mazda 323/Familia, namely the Ford Laser 2-door and 4-door hatchback and the Meteor 4-door sedan. 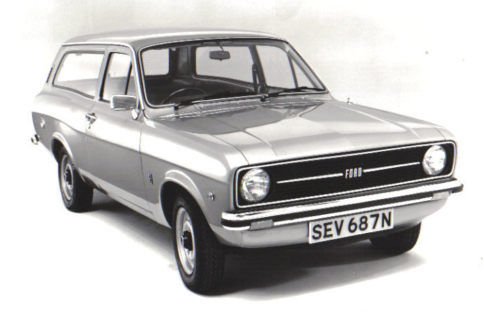 The Mk2 Escort was introduced to New Zealand in early 1975, and was assembled at Ford's plant in Wiri, South Auckland. Unlike the Australian models, the New Zealand Escort range followed the specifications of the British models, aside from the use of metric instrumentation. All bodystyles were assembled, including the estate - which was previously (in Mk1 guise) a built-up import from the United Kingdom.

Unlike Australia, the Escort and Cortina ranges sold well and often topped the car monthly sales lists. An update was given for the range for 1979, which notably involved the addition of the Ghia model, the adoption of the GL's square headlights on the lower end models, Ford blue oval badging, and sport wheels on the L and GL. For 1980, all Ghia models gained standard alloy wheels.

The Escort's production ended in late 1980. It was replaced in New Zealand by the Ford Laser in early 1981, which was a badge engineered Mazda 323, available in sedan and hatchback forms.

Assembly of the Mk II Escort commenced in August 1975. The Escort was a best-seller in the Israeli market, its best year being 1976, when a total of 3,801 units were assembled. Line-up included 1.1- and 1.3-liter versions. Most were of the four-door variety, and only 150 were built as a 2-door 1.1L. Assembly ended after 12,700 units, in April 1981. No Ford passenger car was since then assembled in Israel.